Phoenix Suns stars Steve Nash and Grant Hill threw down the gauntlet to President Obama before his recent (brief) visit to Arizona, challenging him to a pickup game of three-on-three. 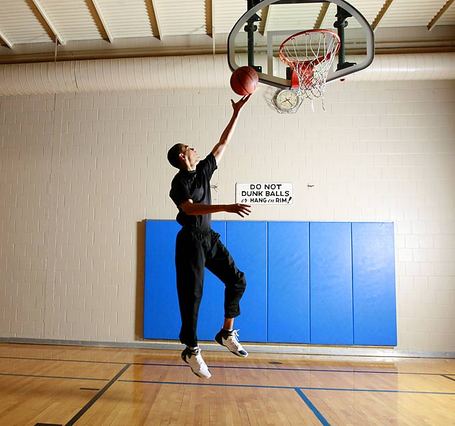 Nash said, "I would love to meet him, obviously, and to play hoops with the President would be kind of fun."

Talking about the rest of the Obama cabinet, Nash went to his inner Kevin Garnett and dished up some smack, "I'm not to worried about some of those cats."

Steve Nash needs to check himself. Captain Canada should remember he's a guest in our country playing our game. He's welcome here and all, but calling out the Baller-in-Chief might just earn a green card revocation. It certainly would have under the last administration.

Grant Hill continued to pile on, saying, "We know he has a love and appreciation for the sport. We figure he gets his best three, we get ours and we meet on the court somewhere."

Hurting his chances for a career in politics, Hill went on to say, "He's kind of a point guard, so we'll have Nash on him -- USA  vs Canada. Canada might win this one."

While the President wasn't able to make time to accept the challenge and show Nash a thing or two, we are confident that he will at some point come strong and represent.

Calls to the President's Press Secretary for comment have not been returned.

Listen to the audio: Nash and Hill call out Obama