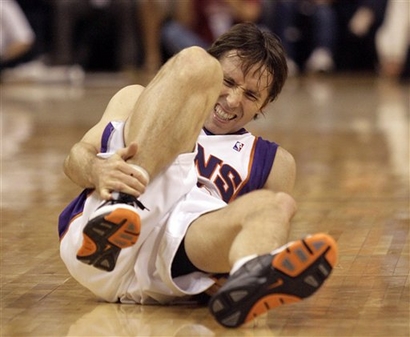 The Suns were in command of this game throughout, although the Bobcats threatened several times.  The Suns built an uncomfortable 10 point lead through solid play in the first half, first with Nash and Shaq and then with excellent bench play. I want to see a lot more Nash/Shaq pick and rolls.  Seeing Shaq roll to the basket is an awesome thing.  It's like Shamu jumping the Sea World tank wall straight at you.

The Bobcats threatened to close at the half, thanks to sloppy execution.  In the final 40 seconds of the half, DJ Augustin made 2 free throws, Boris made a shot and Raja got his Kobe on and hit a 3 at the buzzer on a play with only 3 seconds left.  In that time, Nash had missed his mid-range shot and had been driven out-of-bounds for a turnover.  An 11 point lead with 40 seconds to go devolved into a scanty 4 point lead going into the break.  If the Suns want to get anywhere this year, they need to work on their execution late in quarters.  They suck!

The second threat came later in the game following Nash's injury.  Nash made a cameo to shoot (another) clutch three before exiting the game completely.   The Suns held on.

Aside from the last minute before the half, I don't really have any complaints or Suns players to nitpick.  Just about everyone had a solid, helpful game.  I do worry about the injury situation with Nash and Hill and still want to hear some good news for Amare.  You know he wants to play.

Here, we have postgame audio from KTAR Sports 620 with notes after the jump.

140OB and the Night of the Offensive Fouls

We got the win, put up another huge scoring night at 112 points.  That wasn't even good enough to lead the league tonight, with yes, you guessed them, Chicago coming in at 120 and Toronto scoring 118.  Just think if the Knicks had also played.  Suns ball has infected all the obvious teams.

The Suns offense was slowed by [1] clock problems which delayed the game four times [2] by the Bobcats stepping into the lane and taking charges and [3] Steve Nash's injury which resulted in only 18 points scored in the 4Q.  Of the 19 Suns turnovers, a good chunk came from offensive fouls rather than bobbled passes or picked pockets.

Those problems aside, the Suns were clearly on another wicked pace, easily in the 125+ range.

This particular game is not good evidence (given the 19 turnovers), but my theory is one of resonant and natural frequencies.  Every team, like every contraption, has one.  In the case of a crappy car, the car vibrates ridiculously at 30 mph, at 40 mph, at 50 and so on.  However, at 80 mph, the car inexplicably stops rattling like the death trap it is and starts humming like a Lotus.  Run the same car at 90 and you are back to rattling so hard you think the bolts are going to shoot off.   If you change the parts, you end up with a different natural frequency.

In the same way, teams have their own natural frequency, or a natural speed at which they play their best.  As Eddie Johnson observed, the pace goes up, but the Suns TOs have gone down.  What is the natural frequency for this team?  140.

Boris and Bell vs. JRich

Boris punished us with 27 points (on 10 of 12 shooting), 10 rebounds, 6 assists, 2 blocks and only 2 TOs.  Bell tossed in another 23 points, 3 rebounds and 3 assists.  Could they have done that for us?  Probably.  Is it better to have those guys rather than JRich?  Maybe.   We know the streets of Scottsdale would have been safer without the trade.  For whatever reason, I don't have much remorse about it.  Thankfully, tonight, it's the george W. that matters and we got it.

Alvin Gentry's is investing his honeymoon period in developing the bench.  Porter tried that too before his honeymoon ran out.  Gentry is investing confidence in the bench and has streamlined and sped up the team's offensive and defensive schemes.  Dragic and Dudley seem to be the prime beneficiaries in the rotation, and they played modestly well.  Barnes emerged from his funk, excluding one ill-advised 3 and Lightning Lou had another scrappy game with 3 blocks and without the requisite turnover.

Not a moment too soon, considering the loss of Amare and the uncertain condition of Nash and Hill. 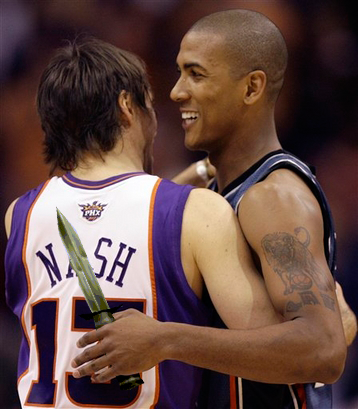 It was a treat to watch Steve Nash and Raja Bell go at each other, particularly in the first half.  It's like the comic books, where the storyline has to get all wonky just because you want to see two "good guys" fight each other.  Wolverine vs. Spiderman.  Hulk vs. Daredevil.  In this case, it was Mighty Mouse vs. UnderDog.  It was fun to see Bell get a bit flustered.  He scored a lot, but so did Nash. 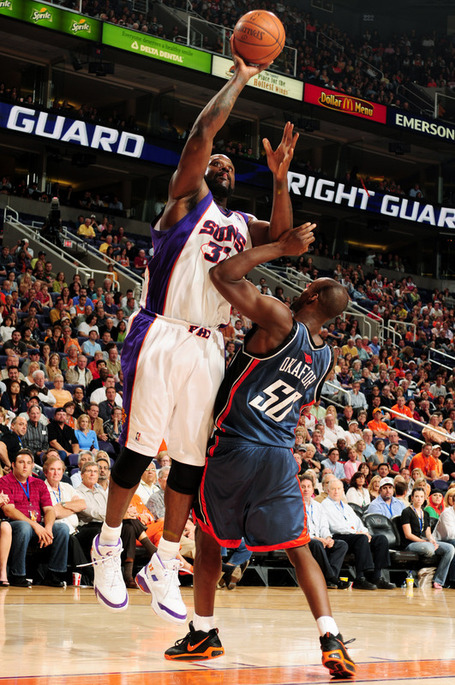 Okafor and Diop didn't fare well against Shaq.  Neither did Crash Wallace.

Anyway – I like the pace with the 1st unit. Nash pushed the ball when he could and if the early shot wasn’t there they pulled up and looked for Shaq on the trailer in the secondary break and only then worked it around and into the post. This is something we saw earlier in the year. It was a little more under control then the first three games and more sustainable.

The second unit came in and was way small but LB and Dudley got steals and Lou got some blocks to ignite the break. That unit gave the Suns a good lead too. BUT the Bobcats are thin and if Juwon Howard is on the floor getting beat off the dribble by Lou then you know you are thin.

Dragic is certainly looking better. More confident at least going to the rim if not finished and at one point in isolation totally abused DJ Augustine w/ a spin move forcing a defender to come help leaving someone open for a three (that I think missed). Nice.

Then when Shaq got 3 fouls w/ 2:30 to go Gentry went w/ Lopez which I liked. He wasn’t great or anything but I like giving him minutes more consistently instead of just going small again.

Oh…and Boris Diaw is a very nice basketball player. I missed those post moves and drives from the elbow.