Share All sharing options for: Welcome Back, Suns' Fans

Has anyone been watching the final season of ER?  All of the old characters are making cameos.  Even the doctor that Goose played, made a re-appearance as a flashback (he's dead, in case you didn't know (and I don't know the character's name, but he's "Goose" from Top Gun)).

This year has seen the returns of: Mike D'Antoni, Raja Bell, Boris Diaw, Shawn Marion, Shawn Marion again on another new team on Friday, the "run-and-gun" system, and the return of fun.  Fun -- even under the D'Antoni 7SOL Suns -- had been missing since the 2005-2006 playoff run.  The pressure started mounting with Amare's return, resulted in trading away Matrix and the balloon popped with Duncan's 3-pointer.

Last night, I've leaving the game with JSun2 and I'm trying to get home while winding my way through non-season-ticket-holders.  We come to the game a little bit before it starts and we generally make a beeline out.  With the boy, we stayed the whole game.  He's been making it through the totality of the game more often.  Last night, with two minutes to go and a 10 point lead I suggested leaving early.  He wanted to stay until the end.

But I digress.  I'm pissed at all the fans who only come to one or two games a year.  They wander around, taking in all of the festivities to which I've become accustomed, immune or ... unappreciative?

Any Catholics out there?  I'm what is termed a "cradle Catholic" -- allegedly, we don't really appreciate our faith.  We've been doing it since birth and get complacent.  When my wife converted a year into our marriage, my mother was ecstatic.  My mom said that converts are more enthusiastic and bring a good (not her words, but her point) "shot in the arm."  It's true.  The wife is a lot more active.  More often than I should, I shuffle in, mumble a few prayers, eat the wafer, cross myself and follow the priest out the door.

I've been doing the same things at Suns games.

Stan Seth has a little of the same problem as I do, I think.  And, perhaps that is the perceived "negativity" around here.  Some of the other guys try to stay optimistic (I think Panama just gets happy when he drinks, whereas I get more sarcastic and cynical), but all the contributors and posters and participants fall into it sometimes.  Look, we're just being realistic.  Shaq is ancient and enormous.  Nash is creaky.  Hill is a sneeze away from throwing out his back.  Dragic's handle is deplorable (albeit improving).  LB cannot say "pass" in English or Portuguese.  JRich needs to stop being an off-court distraction.  Amundson catches more passes with his face than his hands.  Kerr and Sarver think they have a fantasy basketball team.

But, it's probably more fun to be like the one-timers sitting behind me last night -- living and dying with everyone free throw ... thrilled by every dunk ... mad at the refs for every call going against the Suns (especially the proper ones) ... cheerly wildly for one of Barnes' full-court passes ... cheering wildly for Barnes to jack up a 3 (gasp!) ...

JSun2 had a great time, too.  Screaming to get a t-shirt tossed to him.  Trying to catch the Subway sandwiches dropped from the catwalk.  Shooting hoops outside the arena.  Asking to stay until the end of the game.

Whatever happened to some delusional and fervent faith in your squad?  What about cheering madly for that stupid little Jack Ball to stop on your section so you get a gift certificate for something besides the free tacos?

For Lent, I'm going to try to give up my negativity.  If I'm silent, that's probably because ... well, you know the saying.

Not sure which picture is better, but I know which one is more timely.  Duff supports responsible drinking.  NOW, WHO WANTS TO PARTY!  OH, YEAH! 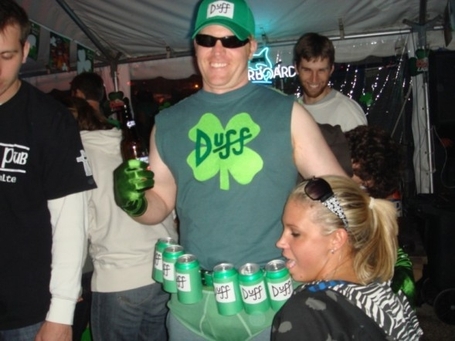