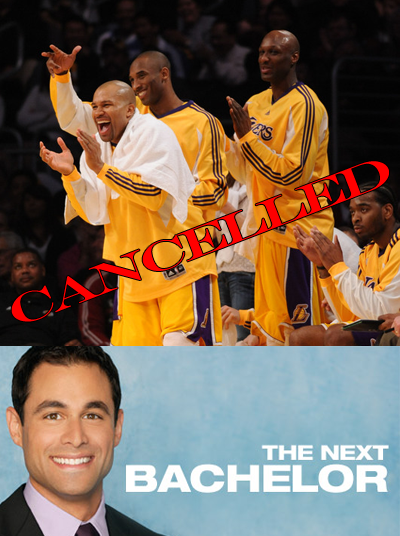 In a bold move to reinvigorate the NBA in these tough economic times, David Stern has moved to cancel Sunday's Suns game against the Lakers.  Instead, ABC will replay re-runs of the Bachelor.

"The outcome was just too obvious," said NBA power broker David Stern, "We expect Lakers fans to say that the Suns have no chance, but when we also saw Suns fans say the same thing, we knew it to be true."

Besides exciting re-runs of the Bachelor, true fans can watch the ESPN/Accuscore's 10,000 simulations of the game on NBA League Pass.

"The simulations can actually be more exciting than the real game, because it happens faster and we load up fewer commercials." said one technician, who goes by the nickname "Scooby".

"And for Suns fans, they can watch the 3 games of the 10,000 where the Suns actually win." Scooby said. "Those games were actually a programming glitch, since we all know that the Suns have no chance of winning on Sunday."

The NBA Players Union is upset because the players will not be paid for not playing in Sunday's game.

"NBA 2K9 cannot be made without the players.  ESPN's Accuscore cannot be generated without the players playing the game.  There's talk that next season will be completely simulated.  They'll want to steal our DNA and not pay us at all." said Derek Fisher, who's daughter has never been heard of again, since he got out of Utah and moved back to LA.

Critics argue that the Suns imploding season has "more drama" than Jason ditching Melissa for Molly.  However, everyone agrees that Jillian was more woman than Jason could handle.

Our contacts at Stern's office reported his grinchly glee at having finally broken the optimism of Suns fans after 41 years of stealing their hopes, dreams and joys.

"Finally!" he sighed with satisfaction.