I'm working around the house today cleaning the kitchen, pulling weeds and thinking about Shawn Marion and what could have been. This isn't exactly new territory, but seeing the Matrix in Phoenix last night with those crazy floaters, 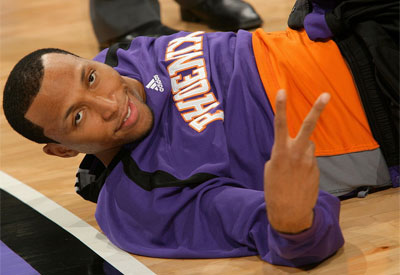 pogo-stick flat-footed dunks, the energy and hustle, the ugliest jump shot ever ... it all just brought it back up again.

Shawn left Phoenix primarily for money reasons. He wanted a max deal of around $20m per year and the Suns weren't going to give it to him and rightly so. As great as he is, Shawn is not a max deal player.

That left the Suns no choice but to trade him and try and get some value since he could have opted out after last season. Shawn had to go, whether it was in a mid-season move or by letting him walk at the end of last season. The Suns understandably chose to take control of their fate and pulled the trigger.

Shawn is just weeks away from the expiration of his 6-year, $80m contract and will enter this summer's free agency period at a time when teams are not in the spend-happy mood they were a few summers ago.

He is a 30-year-old former All-Star whose numbers are down and is realistically not going to get any kind of deal worth more than about $10m per year for three or four years. He's not a player projected to age well and teams, especially in these economic times, are not going to be willing to take a flyer on signing him to a big, long-term deal. There's no more Isiah Thomas with his unlimited checkbook and even Paul Allen isn't going to be there to bail buy out the mistakes.

If the reports are true, Shawn could have extended in Phoenix for $12-$15m per year and all would have been right in his world. And ours.

With the core group of Amare, Nash and Marion, along with Barbosa's inexpensive contract, the Suns would have only needed to add a few pieces (including a mobile defensive big man) and all of the drama from the last year would have been avoided.

The regret game is one we play often here in Phoenix. Draft picks sold. The suspensions. Joe Johnson. The coin flip.

For me though, Shawn's insistence on searching for greener grass is the one that haunts me most. #31 is the only Suns jersey that hangs in my closet and I will never have an unkind word to type about Trix (calling his jump shot ugly isn't unkind ... just painfully true).

I wish Shawn the best in a tough free agent market and some day hope to ask him if he regrets his leaving Phoenix as much as I do.