Suns crush Kings but will it save Amare's job?

Share All sharing options for: Suns crush Kings but will it save Amare's job?

Well Suns fans, that was fun. Not so much for the game but because I drank too much and sat with a great group of rabid Suns fans.

Chanting D-Fence and booing the ref's while up by 50 in the fourth quarter has it's own special charm that transcends the actual game. I doubt Goran Dragic has heard his name chanted since coming to America. 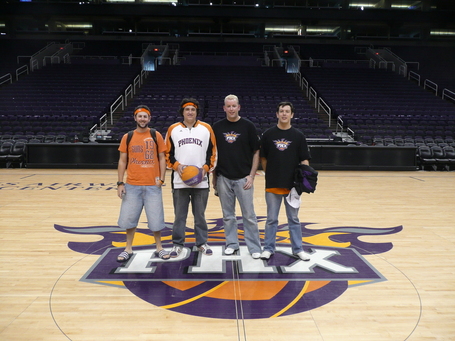 You should already have heard about the adventures of the  Destination Phoenix Down Under Crew on Planet Orange.net as they shadowed the team from Toronto through the rest of the road trip on back to Phoenix where they were given the royal treatment by the entire Suns organization.

After talking to these great guys and reading their story, you really have to hand it to the Suns for rolling out the red carpet for a group of fans that went to such lengths to support their team. (check out the video highlights here)

We love to throw stones at Kerr and Griffin from our armchairs when we disagree with their moves but you have to give them credit for understanding that the fans are their customers and for being down to earth good people.

Thanks (I think) also to Bright Side of the Sun member Turambar and his buddy James for introducing me to Seamus McCaffrey's Irish Car Bombs. You guys might be Brophy grads but you are still ok.

The game itself was a laugher due in equal parts to the Suns being more aggressive and focused early and a Kings team that played yesterday and looked about as listless and lifeless as you could possibly imagine.

So, while Amare wants to "bottle this game" and Grant and JRich talked about running more and playing loose it's not a game that we should think too much about unless the Suns can roll off 4 or 5 wins going into the all star break. We've already seen how well this team can play this season and we've seen how quickly they can get into a slump. One game doesn't change anything even if it was the biggest blowout in the history of the US Airway Center.

And for the big question - will a decent game by Amare cause Kerr to rethink the deals that he's currently working? I don't think so.

The word I am getting is that the decision has been made and Amare will be gone sooner rather then later in a move that has been described as addition by subtraction (we've heard that one before haven't we?) and will seek to yeild a great player named Cap Space.

I've argued for patience with Amare but at this point have to agree that it's time for him to go. I just hope the Suns can get a little more then just cap space in return. He has real value to teams like the Bulls, Kings or Bucks and should at least bring back some combination of draft picks and young big men like Hawes or Tyrus Thomas.

At the suggestion of RottPhiler in the comments we are awarding Steve Kerr with two genius points.

The frist Genius Point is awarded for the classy way the Suns treated the Down Under Destination Phoenix Crew (as described above). I am just so impressed with how the team opened their arms to these guys are immediately recognized how special this situation is. Sports is still entertainment and fans are still customers. I am a fan of good business and decent people and Genius Point is the result.

The second Genius Point is for three of his guys - Hill, Richardson and Dudley who all played like super studs against the Kings.

Hill (despite an embarassing miss in a dunk and a layup) was 5-9 and played his usual stellar role as aging wise floor leader.

JRich was 10-12 and set the tone by being aggressive and active. His defense was helped by the fact that Kevin Martin couldn't hit the broad side of a barn but clearly came to play. Speaking of Barnes by the way, he was 0-4 from three bringing his 3P% to a dismal 26%. Way to keep firing away there Mattie.

Dudley in garbage time had 5 rebounds and 5 steals in 12 minutes. Granted, the Kings had long since given up the ghost but I certainly think he could get more minutes if by chance a certain tattoo'd malcontent was traded along with another certain unhapp'y pl'ayer.