Share All sharing options for: Just crazy enough to....

...well, I wouldn't go so far as to say this would work but I do have to hand it to Matt from Hardwood Paroxysm for this one.

Matt - you are the King of the Trade Machine 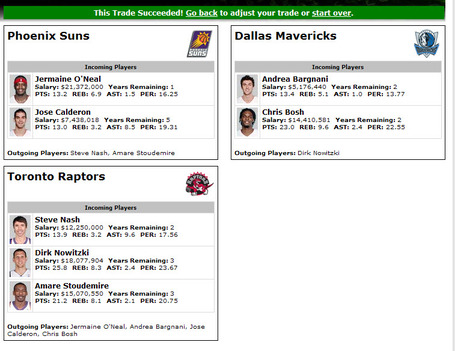 It's not going to happen mind you. It's just too big and too complex to survive the hot fresh air of the GM telephone game. It is mighty interesting though and just to be clear this is PURE SPECULATION. It is NOT A RUMOR.

For the Suns - I've already expressed my feeling that Shaq and Nash just aren't going to fit together even after (if) Amare is gone. In Calderon you get a PG for a the future to build around along with JRich and in the near term he fits with Shaq better. JO is a bust at $21m but that expires this year anyway and if anyone can make him healthy enough to play next to Shaq it's Aaron Nelson and his witchy fingers. If he is healthy, he would fit very well indeed. The Suns would still need another big unless Robin Lopez suddenly turns into Brook Lopez, but with Calderon running the point you could afford to move Barbosa for something like Warrick and Conely.

For Dallas - They lose Dirk which is one of the main reasons this won't happen, but they get in return home town hero Bosh who might be inclined to resign in Big D. Bargnani is a decent player in who still has upside potential. He's only 23.

For Toronto - I wouldn't be thrilled with a front line of Dirk and Amare but they do give each other space to work and you KNOW Nash will draw a crowd, eh. Giving up Calderon is a bitter pill but they also get to dump JO and have Dirk and Amare for a long time (if they can resign them). Nash in an up tempo system is still good for several more years so all they would need to do is get a back up PG. How hard can that be?

Just crazy enough to talk about...