After today's shoot around, Sun players Amare Stoudemire and Steve Nash, along with GM Steve Kerr talked to the media and answered questions about the team and the trade situation. 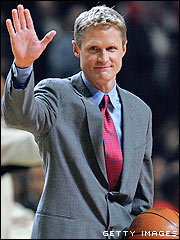