Practice Report: Lou works on his shot (and blocks)

Share All sharing options for: Practice Report: Lou works on his shot (and blocks)

The Suns held an extended practice giving their guys the first opportunity to scrimmage in a long time. This was Stromile Swift's first full practice with the Suns.

After practice Coach Gentry talked at length on a variety of topics ranging from his NCAA favorite (Kansas) to the Suns bench production to the use of the zone defense against the Warriors and Heat.

I asked Coach Gentry about the distribution of shot attempts with more balance between Nash and Shaq over the last couple of games and was told in no uncertain terms, "I don't care about that. I don't worry about that at all....I don't look at the sheet and try and distribute it. It's not an equal opportunity offense....We just go with what's going good and what's flowing well."

So, there you have it. The ball finds energy. You can listen yourself towards the end of the audio to hear the full answer. 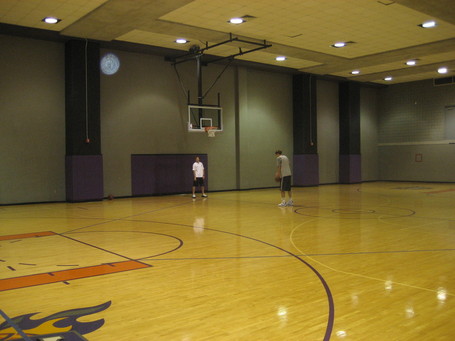