Suns get another must win over 76ers

Share All sharing options for: Suns get another must win over 76ers

Another solid must won game for the refuse to die Suns.

The 76ers are a good team with a lot of nice pieces. They run the floor really well and move the ball in the half court. Unfortunately for them, against the Suns they were outmatched inside giving up an 80 to 50 "edge" in points in the paint  and 26  to 8 second chance points.The 76ers are 2nd on the league in offensive rebounds so that's quite a feat.

One reason that 76ers weren't crashing the offensive glass in this game had to be so they could make sure they were getting back to prevent the Suns from getting many fast break points. They won that stat 23 to 14. 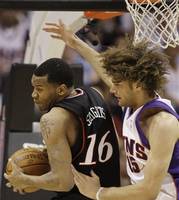 The Suns continue to play well together showing the kind of on-the-court chemistry and balance that was missing during the 6 game losing streak. In this game the Suns had four starters with over 20 points and continued to get great bench production lead by the newly de-braided Jared Dudley.

This was truly a Seven Seconds or Shaq performance with out a lot of Seven Seconds as the Suns executed their half court offense well playing off the Big Fella.

The bad news was Leandro Barbosa going down in scary fashion. At the end of the 1st quarter he went up for a typical LB layup only to end up on the floor in a heap writhing in obvious pain. The replay showed him landing first on his right leg and then when his left left came down it hyper-extended.

If you've ever done this you know how painful it can be and unfortunately how long it can take to heal. At least that's my experience. The good news is the x-rays didn't show any structural damage (such as torn ligaments). He will have an MRI tomorrow but I have to think that he will be out for at least a week or more but that is pure speculation on my part based on how much pain he was in and his inability to put any weight on it while being helped off the floor.

The actual Suns doctor, Dr. Tom Carter said Barbosa's knee is very stiff and it might be a couple of days before he returns.

The 76ers back court combo of Andre THE MOST UNDER RATED POINT GUARD IN THE GAME Miller and Lou Williams hurt the Suns combining for 44 points and 17 free throw attempts (out of a team total of 27).

A key stretch of the game came right at the start of the 2nd half when Shaq had two consecutive blocks on those penetrating guards and then a couple of possessions later stripped the ball causing another turnover. Its seemed from that point forward the 76ers settled for more jump shots. Their 1st half field goal percentage was 61% while the 2nd half it dropped to 49% and was only 42% in the final quarter. The Suns meanwhile went from 54% in the 1st half to 62% in the 2nd.

The Player of the Game has to go to Grant Hill who not only had 21 points on 10 of 13 shooting but held Iguodala to only 11 points on 5 of 10. Grant had a fantastic all around game playing just under 40 minutes.

In fact all of the Suns starters including Shaq were just under 40 minutes in this game. These higher then normal numbers in part were due to losing Barbosa early in the game but also was helped by having two days off before and after this game.

Jared Dudley was the only bench guy with significant minutes and earned his time with his continued outstanding play. He was just seconds under having his third straight game with over 20 minutes - a stretch in which he's averaging 9.6 points. In this game his perimeter defense was on display at one point getting right up on Thaddeus Young on the wing and drawing the charge. There were a lot of people around the league that said we would come to appreciate Dudley when the trade was made and boy were they right.

Jared along with Lou and Barnes have really stepped up in the void left by Amare and while none of those guys bring what Stat does, they do bring a lot more in other areas. We will hold off addressing what that all means for Amare's future in Phoenix (for now) while we just enjoying watching forwards who hustle and defend on a nightly basis.

Up next are couple of more days off and then the Wizards on Saturday night followed by three tough games next week against Denver, Utah and Portland. Let's hope LB can return in time but if not Tucker, Dragic and JRich will have to pick up the slack.