From sock puppet to dairy queen: How Shaq came to tweet 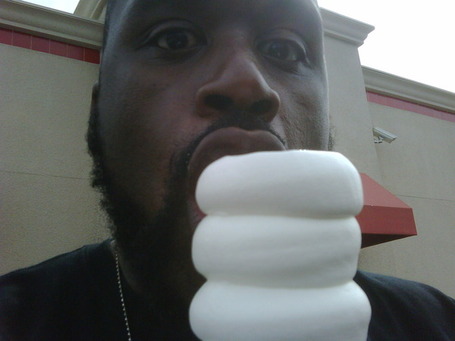 Shaq stopped off for an ice cream today.

Can I plaese cheat on my diet and go to dairy. Queen pls pls pls

I will admit this entire twitter thing causes me great joy since we played a fairly significant role in the chain of events that lead to The Big Tweet.

For those new to these parts, here's how it went down:

Phoenix Stan is planning his trip to the Las Vegas Summer League and discovered that he can't update this blog via Blackberry so on a whim (which is pretty much how that idiot does everything) creates a twitter account.

Robin Lopez screaming in dudes face on D. Suns fans are going to love this guy

Flash forward to early in the season when we discovered what appeared to be Shaq on twitter.

There were some questionable tweets but since the Shaq feed was being "pimped" by a Suns employee (who it turns out was also duped) it seemed fair to think it was The Big Fella himself.

Or, an even more likely scenario (straight from marketing-conspiracy paranoid land) a corporate Sock Puppet was using Shaq's celebrity to promote a certain flavored water beverage that Shaq was in fact a spokesperson for.

This promoted intense righteous indignation on the part of Mr. Phoenix Stan who lashed out this way (what a jerk ass):

The real shame is that the Suns organization is threatening its credibility by promoting this sponsor's impersonation of one of it's players in a way that does impact and disrespect the game. All joking aside. That's a load of stinky crap.

Some back and forth ensued with Shaq's representatives and the Suns employee, (aka @phoenixsunsgirl who it turns out is totally rad) and next thing you know the fake Shaq is unmasked and @The_Real_Shaq is born. There is of course a lot more to the story here but those involved will have to explain their roles more fully.

Whatever happened behind the scenes, they moved fast and seized the opportunity to use this new technology to connect the Biggest Personality in the game with his fans.

Shaq reached 10,000 followers in a matter of hours after the news of his real tweets broke and has now reached epic status with over 350,000 people following his every move from ice cream to hamburgers.

The Suns jump in with both feet and organize the first ever Tweetup Event.

In the spirit of unity that is twitter, @NotShaqONeal and @The_Real_Shaq showed there were no hard feels as they hugged it out after the game.

Pretty much everyone (except Jerry Sloan) is on twitter.

We've come so far, so fast that now a player even got  in trouble for tweeting during half time! How dare he pick up his cell phone and type in 140 characters.

It has been a fun ride and we are glad that we played a small part in helping bring Shaq to twitter and therefore twitter to the world.