Shaq to Bosh, don't get your panties in a bunch

Share All sharing options for: Shaq to Bosh, don't get your panties in a bunch

After destroying Chris Bosh and the Raptors (little) big men for 45 points on 20 of 25 shooting, Chris Bosh took exception to Shaq's "cheating":

"He was just camping down in the lane," Bosh said Friday night, after O’Neal’s biggest scoring night in six years led Phoenix to a 133-113 victory over the Raptors. "I mean, if they’re not calling three seconds—I thought it was a rule, but I guess not."

'I heard what Chris Bosh said, and that's strong words coming from the RuPaul of big men,' O'Neal said. 'I'm going to do the same thing (in their next meeting) I did before — make him quit. Make 'em quit and complain. It's what I do.'

Listen to The Big Responder himself... 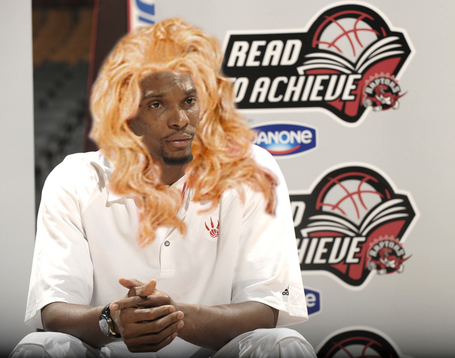