Share All sharing options for: Stromile Swift - headed your way

I believe that Stromile Swift will be signed by the Suns in the next few days.

He's a nice low risk addition with good experience. I don't know much more about him beyond the obvious - he's an athletic big that can block shots and finish. The Suns have an open roster spot anyway and if they aren't going to play a young guy like Sims then Swift is a good option if he signs for the vet minimum.

His per 36 minute career average are 15 points, 8 rebounds and 2.3 blocks which are decent numbers. Here's what Hoops Hype says about him:

Outstanding athleticism... One of the best dunkers in the league... If he is on the court, alley-oops will be an offensive weapon to consider for his team... Will grab a few rebounds thanks to his huge leaping skills... Has a sometimes effective mid-range shot... Takes too many of them, though... Runs the floor well... Low basketball IQ... Has not lived up to the expectations.

Learn more about Swift from his Yahoo! Sports player page 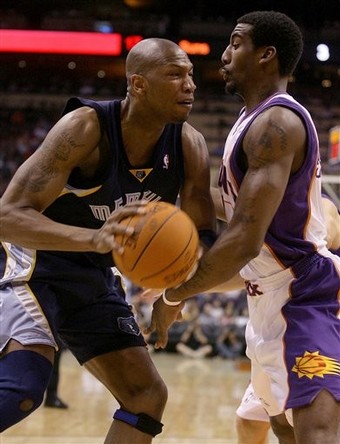 One thing for sure...he can throw down with the best of them