Share All sharing options for: Goran Dragic interview: The future is now

When the Suns went after Goran Dragic this summer, they called him the second best point guard in the draft and felt that only his existing contract with the Spanish team Tau Ceramica kept him from being a lottery pick.

Steve Kerr has since admitted that they over-hyped Goran a bit, and certainly a few guys like Russell Westbrook and Mario Chalmers would agree.

After a rough start to the season where he struggled to earn the trust of Terry Porter and fell behind in the rotation to Sean Singletary (who is now in the D-League) Dragic is starting to show why the Suns front office thought so highly of him.

As the season's progressed and with the change in coaches, Dragic has grown more confident and displayed some signs of being a viable member of the Suns rotation in years to come.

His numbers under Gentry have improved dramatically as has his confidence and overall comfort-level on the floor. His field goal percentage increased from 31% to 48% and his three point shooting from 14% to 46%.

Early in the season he had a "deer in the headlights" look to his game, whereas now he is much more aggressive, both off the dribble and with his shot. He's still a rookie and a fairly raw one at that, but he doesn't seem totally lost when he comes in the game. In fact, over the last three games the second unit with Dragic has produced some impressive runs and have allowed the starters to rest comfortably.

Despite everything the Suns have gone through this season, finishing the year with a backup point guard that can spell Steve Nash would have to be considered one of the highlights (if this trend continues).

The Suns gambled with one of the biggest guaranteed rookie contracts ever given to a second round draft pick to get Dragic, so they certainly have an interest in seeing him reach his potential as a Sun. Unlike with most second round picks, they can't afford to give up too soon.

If he develops this off season like Coach Gentry expects him to, the $6 million over the next three years will look like a steal. If not, it will go down as yet another gamble by this Suns front office that didn't pay out.

After Suns practice, I stood with Coach Gentry for a few minutes and watched as Dragic got in some extra work with Suns assistant coach, Igor Kokoscov. "He works hard. He works his ass off." Gentry commented, "He'll be a different player when he comes back from the summer league."

I asked what specifically Gentry was looking for him to improve on and he referred to the rookie's overall game but mostly his confidence. He's playing better of late but still on occasion passing up open shots and trying to make a difficult play.

"I told him this will be the only time in your career that the coach will get on you about not shooting. You better take advantage of it," said Gentry.

Coach Gentry summed up his feeling for his young pale point guard this way, "I am telling you guys, he's a hell of an athlete. You'll see. As he grows more confident you'll see. He's pretty damn good." I also asked about Goran's tan, to which Gentry replied, "Thank God the suns' coming out. He needs to be in the sun."

There's surely a metaphor in there somewhere about the young player needing more time in the sun but I can't seem to find it.

After he was done with his extra work, Goran talked with me for about 10 minutes. I started by asking him about his time in Phoenix and how he was adjusting to the city. 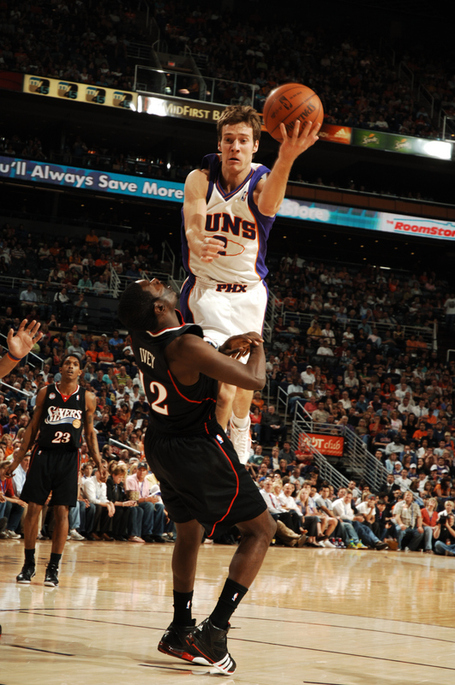 Goran replied that he's adjusted more quickly than he thought and that he's gotten to know the city. He enjoys going out to eat in Scottsdale and hanging out with his friends.

I am going to paraphrase most of what Goran said because his English is still a bit broken. You can listen yourself to the interview and you'll hear that he is certainly conversant and intelligent so I don't want to give the wrong impression by quoting him saying "I know the city really quick."

Asked how the season has gone for him, he readily admitted that he struggled early but feels that he is playing well now as his confidence has grown. He seemed pleased with the performance of the second unit and took pride in being able to give the "old guys, Nash and Shaq," more rest.

Now with Leandro Barbosa out of 1-3 weeks, Dragic will get more playing time. I asked if he was looking forward to this and frankly was hoping to see a bit more desire on his part. He responded more humbly, talking about his enjoyment in playing with Leandro because he pushes the ball, which opens lanes and suits his game.

Dragic felt that playing with Tucker more now he will have to take up some of that responsibility for pushing the tempo on the second unit. Defensively, the bench guys will have to pick it up as well. Dragic seemed impressed (as we all are) with Jared Dudley's play on that end.

This summer, Goran plans to return to Slovenia (anyone that can leave Phoenix in the summer should) before returning to the States to play for the Suns in the Vegas Summer League. He will then go back to Slovenia to play for his national team in the European Championships, which start in early September. Depending on how far Slovenia advances, will determine when he comes back to spend some time in Los Angeles with his personal trainer to work on building his strength for next season.

Dragic sees himself growing into a starting point guard over the next few years but understands, as he put it, that "it's a long procedure."

Like the rest of the Suns rookies, Goran has a special singing engagement planned for this evening at a Suns charity event at the Arizona Biltmore Resort. He will be performing solo, singing the theme to Greatest American Hero. He didn't seem to be bothered in the slightest by this and said that he would just go on stage and have fun with it.

I really liked how he responded to this. He showed a lot of poise and sense of self for a 22-year-old who's far away from home in a completely foreign country being asked to publicly humiliate himself. I know at 22, there would have been no way you would have gotten me up on a stage to sing and, in fact, you had better get me pretty liquored up before doing so now at my more advanced age.

Overall, Goran stuck me as a solid kid with a good idea of who he is. He doesn't display the kind of brash lack of fear that some young players have and seems very aware of what he's doing at all times. At the same time, he seemed confident and happy and I see no reason that as he matures and grows physically that he can't improve on what he's shown us so far.

It is typical for young players to take several years to develop and Goran is no exception. With his 6'7" wing span and 37-inch vertical, he has more athletic gifts than most point guards and has already displayed an innate ability to see the floor. I don't think he will become the next Steve Nash but he certainly doesn't seem to be a bust either. It should be fun to see how much he develops this summer and to watch him grow as a person and a player over the next few years.