Share All sharing options for: Richardson and bench lead Suns to victory

What can you say about Jason Richardson. Over the last three games since Gentry has given him the "ultra green light" as Eddie Johnson likes to call it he's averaging 30.3 points and 5.7 rebounds while shooting 67.3% including 57.1% from

In last nights game against the Wizards the Suns came out strong and looked like they were on cruise control to victory. The second quarter let-down in which the Wiz out-scored the Suns 37-26 made it a closer game then it needed to be going into the second half.

Richardson came out and scored 17 in the 3rd quarter knocking down all five of his three-point attempts to put the game away. He's showing us the kind of dominate player he's been his entire career and why he's always been a number 1 or 2 option. He had a season high 35 points on only 18 attempts.

We don't expect this kind of performance every night but it is the kind of occasional dominance Kerr had to have been hoping for when he was brought in.

In blowout win over a poor, injury depleted team there's not too much to get into. The second quarter swoon is of interest though so checking with the ever useful Popcorn Machine Game Flow we see that Wizards 12-2 run came against the bench unit of Dragic, Tucker, Dudley, Amundson and Swift. This is a group that hasn't had much of a chance to play together and especially the Swift, Tucker combination looked out of sync defensively. The starters weren't much better though give up a 10-2 run to close the half.

These kinds of let downs are part of the game and not something I am too concerned about given the way the team responded in the second half.

The Wizards double teamed Shaq every time he touched the ball and the Suns responded well getting open looks for the red hot Richardson and taking advantage of the poor team. Defensively, the Suns once again went to a zone defense and were very effective at throwing the Wizards off-kilter.

Jamison talked about this post game saying, "They put a zone on us and we acted like we never seen a zone before in our lives. That slowed us down as far as getting easy opportunities offensively."

The Wizards do have some nice pieces if you consider that Arenas, Stevenson, Haywood and Butler all are sidelined.

The Suns bench closed out the game strong in the fourth quarter putting up a big 9-0 run to start and finished with a 13-2 run to bring it home. Swift got his first real playing time as a Sun with 10 points and 12 rebounds in 21 minutes. The Suns are going to need his size against the bigger Nuggets and Jazz teams coming up.

The big non-game story of the night:

Amare returned to the arena for the first time since having emergency eye surgery a month ago. He held a press conference before the game talking about his status and appeared on camera with the broadcast crew during the second quarter and after the game with Tom Chambers. 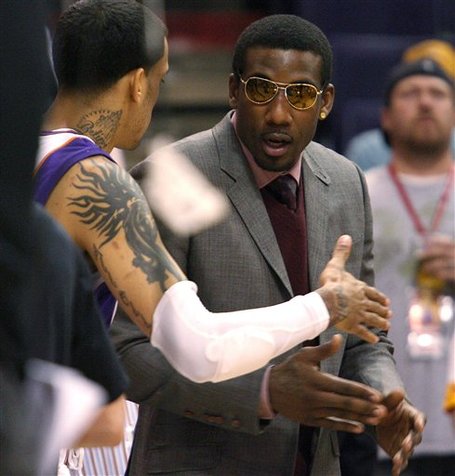 During the the press conference Amare reported that the recovery is going well but that he still can't do any activity. He has a buckle around his eye holding things in place which is deforming his eye and making him more near-sighted then far-sighted.

He said that he talked about the odds of getting hit in the eye again with the training staff early in the season and that lead to his decision to discontinue the goggles.

Amare was experiencing some eye trouble before the Clippers game before he got hit in the eye by Al Thorton. The doctors aren't sure if the retina was detached before the hit and just aggravated by it or if that hit caused the damage.

Here's the full audio of the press conference provided by Sports 620 KTAR:

The Suns have not had a trouble scoring without Amare and with his well documented defensive liabilities the question regarding his future in Phoenix is even more in question. Fortunately, he is expecting a full recovery in a couple of months and promises to wear goggles the rest of his career.

Here's the post game audio with Shaq talking about passing Moses Malone for 5th on the all-time scoring list and his new Bowling for Bench Players intro, JRich talking about his great game and Jamison talking about getting beat by the Suns zone defense.