The original high-flying Hall-of-Fame mascot of the NBA, The Phoenix Suns Gorilla, was injured during his trampoline dunk routine during Monday night's Suns game against the Nuggets.

The Gorilla perhaps was showing off for all the other mascots that were on hand to help celebrate his birthday. In the process of showing his guests who was the top banana in the his ape house, The Gorilla soared a bit to close to the sun and hit his hairy lovable face on the rim. He was quickly taken off the court for medical evaluation and did not return for the final exciting conclusion to the game. The Suns, perhaps in tribute to The Gorilla's years of service, won the close contest.

The Gorilla was treated with six stitches in the tongue by the Suns medical staff and released.

The visiting mascots who included the Cardinals’ Big Red, Baxter from the Diamondbacks, the Pacers’ Bowser, the Hornets’ Hugo and Scorch from the Mercury had only this to say, "urrr, errrrr, uhhhhh, grrrrr." We assume those grunts and noises were well wishes from his comrades in fur (and Hugo).

The Phoenix Suns today had no official word on a timetable for The Gorilla's return to action. 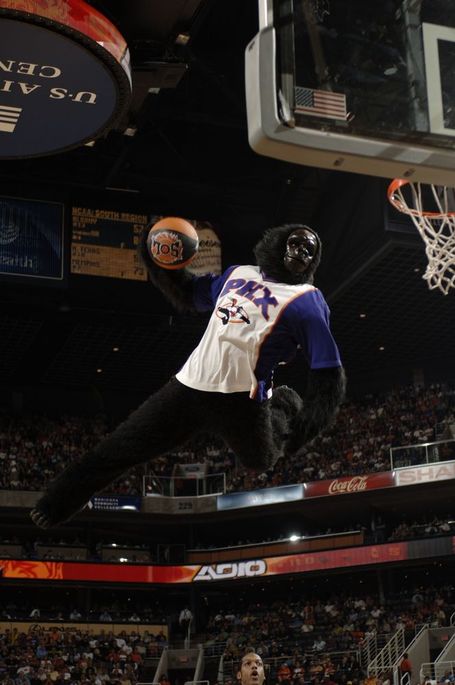