Grant Hill & the Year of the Comeback

Share All sharing options for: Grant Hill & the Year of the Comeback

With all of the hub-bub surrounding the Suns this year (Shaq's resurgence, Amare's...well...Amare, Terry Porter, Goran Dragic, Alvin Gentry, roller coaster season, might miss the playoffs, probably will miss the playoffs, might make the playoffs, finally on a winning streak, etc.) there has been one topic that has been touched upon, but not really looked at enough for my liking.  So let me start by asking a question, what do you know about Grant Hill the ball player? 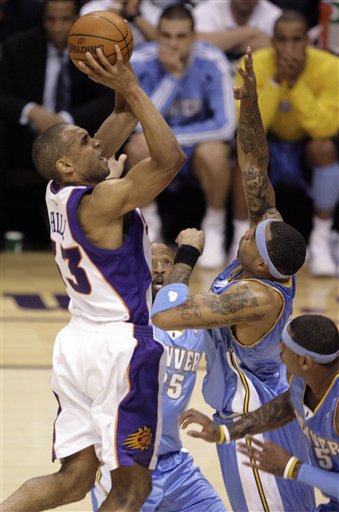 Between this year and last we have seen Mickey Rourke and Robert Downey Jr. make triumphant returns to the big screen in The Wrestler and Iron Man respectively.  Why did we care?  Because both were actors who for whatever reason (okay we all know the reasons) were not heard from in what should have been their prime and left us wanting.  We knew what they were capable of and felt cheated by the fact that they weren't giving it to us.  Instead we were left with the memory of what they had done in the past and a serious case of the "what ifs."

Now, for those of you asking what any of this has to do with 6-time All Star Grant Hill, this post is definitely for you.  People tend to forget that Grant Hill was on track to be one of the greatest players in the history of the game during his first 5 seasons (6 if you count the lockout shortened season of 98) in the league.  As one friend of mine puts it, "Grant Hill was LeBron James before anybody even knew the name LeBron James."  No, Grant Hill never had LeBron's body or strength, but he put up INSANE numbers nonetheless.  In his rookie season, Hill put up 20 pts, 6 boards, 5 assists, 2 steals and 1 block a game.  Think about those stats for a second and then compare them to LeBron's 21, 6, 6, 2, 1.  In year 2 Grant averaged 22, 10 and 7 and it continued like that through the '99-'00 season where he averaged 26, 7 and 5.  Then, disaster.

Over the next 3 seasons (after being traded to Orlando) Hill played a total of 47 games - just over half of one NBA season!  I once read an article wear Grant Hill joked that "ankle" became a bad word to his little daughters because every year they'd hear that word and knew what it meant - more missed time for daddy.  It didn't matter what he did, Grant Hill could not stay on the court.  He went from being a HOF no-brainer to being a running (or in his case, stationary) joke.  He went from being the next Michael Jordan to being the next Penny Hardaway.  He basically went from being the Mickey Rourke everybody wanted to see to the Mickey Rourke everybody completely forgot about.

This season it has been awesome watching Grant Hill fly up and down the court - and I do mean fly as seen in the video above - in the 7SoS system.  Grant Hill has shown why he was on track to be one of the greatest of all time.  Granted, he is not putting up the numbers that he did in his younger days, but he has been a big part of this team's recent success.  He still has one of the best transition crossover dribbles in the league (anyone learning the game needs to watch how he uses that dribble to get past opponents and get the leg up on the break...thing of beauty), is one of the smartest players in the world, and he is looking as quick as he did in his earlier days (helped by the fact that the bench play is allowing him to play for shorter periods of time) and of course.  Probably the best thing, though has been the fact that he is playing and contributing in EVERY game.  If he plays in the remaining 12 games this season, it will mark the first time in his career that he has played in all 82 games (the closest he's gotten was 81 games in the '97 - '98 season).  This is no small accomplishment for a 36 year old who managed to play in only 18 games between 2000 and 2002.

So, as we root for the Suns to overcome the 3-game deficit that separates us and the Mavs and complete our in-season comeback, lets enjoy the fact that we are seeing Grant Hill play every night with a smile on his face as opposed to the painful grimace that has been seen all to often during this brilliant Sun's dark career.