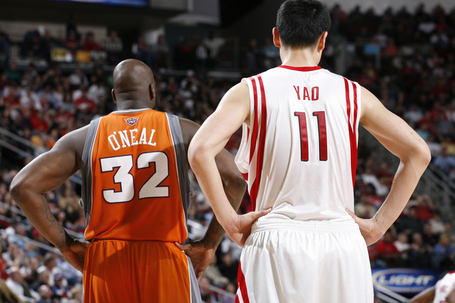 ESPN's Accuscore had the to Rockets winning this one easily, but the Suns came back to tie the game with 14 seconds to go.  In rare cinematic parallelism, each team had 6 or 7 seconds to execute a play with the score tied at 112 all.  Both went with a high PnR with their midget PGs and their GINORMOUS Centers.

The Rockets played first with Yao Ming's moving screen taking out Nash and Shaq trying to stop PG Brooks' curling drive and failing.  Suns down 2 with 7.3 seconds to play.  The Suns ran the same high PnR, but with Nash pulling up for a high-arching 3 over the Great Wall of China.  Nash was due to miss and he did.  Nash is used to shooting over 7 footers like Dirk Nowitzki, so credit to Yao for sticking with Nash and altering the shot.

The Rox are a good team playing at home, the kind of team the Suns aspire to be, with size, great defenders and role players, and a few young zippy guards.  The Suns, instead, appear to rely on wild circus shots, hail mary's and an assorted array of other prayers to compete.  The Suns seemed to have particular problems adjusting their shots to the size of the Rockets.

It's a career season for Suns opponents and this game was no different.  Rockets PG Aaron Brooks joined a long line of young wing players who have had career games against the Suns.  He had a career game with 30 points.  Although Nash had a season high with 32 points, he took a AI or Kobe-esque 27 shots to get there.  He was a big reason why we were able to get back in the game in the second half, but he was also 1-of-10 at the half and so a big reason why we were down 10 to begin with.

Up til the end, one could have argued that both the critical PG and Center matchups were about even, but the final play was the difference.

It's hard not to get deflated after losses, and sure I would like to see more good stuff from our Suns instead of 15 TO stinkers.  I wish Barbosa started.  He and Lou Amundson (+6 in 15 minutes!) really give me joy to watch.

Here's the recap including the final two possessions. Start at 1:45 to see if you think Yao pulls a moving screen.  Of course, I'm not sure it even matters.