Amare introduces Terry Porter to the underside of a bus

Share All sharing options for: Amare introduces Terry Porter to the underside of a bus

Amare Stoudemire has never been shy about sharing his feelings. He's called for the ball. He's not been humble about his career goals. And he certainly let his feelings about Mike D'Antoni be known (after he left). 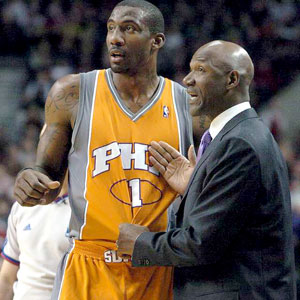 Today Amare talked to the media after the Suns final day of practice which involved a team photo and no actual practice, He didn't spare any punches in letting his thoughts be known about where the Suns season went wrong.

When I asked him about missing the playoffs by just a few games and what points he looks back on with regret he said this:

"There's probably a few games we should have won. We've got to beat the teams we're supposed to beat. We didn't quite do that."

Fair enough and he continues on..

"I think Alvin did a great when he came on board but it was kind of tough with TP there for a second..."

He was then asked if that move had been made earlier if things would have gone any differently.

"Absolutely. If that move would have been there earlier and also if I wouldn't have gotten injured we definitely would be talking about the first round of the playoffs."

So there you have it. According to Amare the Suns aren't in the playoffs because of Terry Porter. You can't get more clear then that.

But what was it about Terry that made things go so wrong? Was it the style of play as Steve Nash likes to talk about or was it the personality of the coach? According to Amare, there's no question.

"With the players we have we can adjust to any style. I think it's more of a personality fit."

Asked to reflect on the difference from the playing under Mike D'Antoni, Amare had even more to say which gives quite the insight into who this young super star player really is and leaves little room for what kind of coach he thinks he needs to be successful.

"Mike was a quiet guy. Sometimes he didn't talk to a certain players. Didn't communicate as well to the players which sometimes can be a little frustrating because you want to build that relationship with your coach. You want to build that friend(ship) so you can sit down with him and talk about personal thoughts and also basketball. You want that friendship with your coach. Mike was a quiet guy.

Then you bring in Alvin, a guy who is definitely a players coach. A guy you can talk to and say 'hey man you know', 'family situation here', 'or my kids here', 'my kids are doing great in school', 'how are your kids'. That's the type of conversation you want to have with your coach. Alvin's that guy.

You want a coach that you can really hug and hold and high five and really have fun with. That makes it fun play. You can high five and hug your team mates. You don't want to have fear of your coach. You want to be respectable with him but you also want to be a friend with him."

Get that? A coach you can be friends with. A guy you can hug and hold and high five who makes playing the game of basketball for millions of millions of dollars fun. You don't want a guy that thinks he knows more then you or a guy that isn't friendly with you. You want a nice coach not a mean coach. It's really that simple. I am not sure how Steve Kerr screwed this up to begin with.

You certainly don't want a coach who doesn't let you do what you worked on all summer improving. Amare when asked about what he was going to work on this summer told us how that went.

"Stay tuned. Stay tuned. I worked on so many aspects this last summer, when I came back this year Terry Porter wouldn't allow me to do it"

No fair. Damn reporter baited him into that one.

"So, I will work on some more things this summer. Where ever I'm at or whoever the coach may be. I hope it's Alvin (Gentry), I will be able to implement that."

No worries though because that's not what's most important.

"I think guys bought into the system somewhat as much as possible. We didn't quite make the playoffs but we stuck together, we stayed a team, and that's what's most important."

On most days, updates from Amare on his health or his outlook on his contract situation would be the main story. And maybe all this mumbo jumbo about Porter is old news to some of you and it is the main story. Here's that part of the story.

Amare, wearing huge black framed glasses to correct his newly imperfect vision reported that he's still not exercising but should begin working out this July. He expects to be 100% for next season.

As for where he will be playing, Amare seems to be very keen to say the right thing.

"Even if the Suns don't want to offer me an extension there's lots of teams that are willing to so it's not a big deal to me. My thing is to stay in shape keep my body toned up and be ready for next season. Come back with a chip on my shoulder and be ready to dominate."

To be fair, when asked if staying in Phoenix was still his first choice he said,

"Absolutely. I love it here. My fans love me here. They believe in me here. No saying they don't believe in me elsewhere but I've been here my whole career and they watched me grow and mature as a man and also as a player"

So don't worry Suns fans. Amare knows how much you love him. I am sure he would like nothing better then to hug and hold each and every one of you.

There's more here that you really just need to listen to for yourself to fully appreciate. You will note that it was Amare that first brought up Porter's name and was more then willing to let his feelings be known.