Could another MVP be headed to Phoenix?

Share All sharing options for: Could another MVP be headed to Phoenix?

Phoenix basketball fans might not know it, but there are active and on-going discussions to bring another two-time MVP to the Valley of the Sun to join Steve Nash.

Lauren Jackson, is an unrestricted free agent and is just now returning to her native Australia after leading her Moscow based Spartak team to the finals. Kevin Pelton of Basketball Prospectus (writing for the Seattle Storm official blog) has the details.

Jackson has previously indicated a desire to either return to Seattle or come to Phoenix with her Spartak team mate Diana Tuarasi.

Jackson is a dominant inside player who was 3rd in scoring behind the Mercury's Taurasi and Cappie Pondexter and is a top 10 rebounder. Jackson and Taurasi share the WNBA record for the most points in game with 47.

I talked to Phoenix Mercury General Manager Ann Meyers Drysdale about Jackson when we met last week and again today at the team's open try-out session.

"We'd like to think that we have a great chance if Lauren comes. It puts us over the top but I've got to plan for Lauren not to be here."

Ann repeated this again today saying she talked to Lauren's agent two days ago and is working on bringing her to Phoenix but reiterated that she's not planning for Lauren to be here.

"Seattle is a team that she's familiar with. She likes Brian Adler and she and Sue Bird have been together since she's been there so it's a 50 - 50 chance. We don't know which way it's going to go but either way we've go to be prepared."

Not everyone is happy about Jackson's approach to the situation:

Lauren Jackson, you're a big-time international player, but that doesn't give you license to treat your fans like crap. Be a woman, step up and choose a team. Now.

Aside for the obvious impact of adding yet another experienced scoring presence to a team that already lead the league in scoring, Lauren could potentially rival Shaquille O'Neal for the Valley's MDP. Most Dominant Personality.

Lauren has been described as a "spark plug" and while Shaq might have the edge in movie roles, we can only hope that his current off season diet (which he says is in preparation to be a underwear model) will go as far as Lauren's exploits in front of the camera.

Jackson, along with many fellow Australian athletes, posed nude in a tasteful artistic magazine prior to the 2004 Olympics and Jackson then appeared in the 2005 Sports Illustrated Swim Suit edition.

Asked by ESPN's Page 2 about female athlete's showing off their "sexy side", Lauren responded in a way that I would consider refreshingly candid.

"Well, female athletes really are beautiful. There are a lot of times when we are going out -- tall, fit women -- we get dressed up and we look beautiful and we're mistaken for models. We've got great bodies and we're female -- that's sexy. That's not using sex to sell the sport, that's natural. Naturally gorgeous.

Just like the men, on the court we're athletes. But off of it, we're sexy people with nice bodies and personalities of our own. If you've got it, flaunt it. You can't just put us in a little box because we're athletes."

Let's face it, as much as we would like to think that marketing sports is all about the game between the lines, you don't have to look far on the NBA side to see how sex is used to sell to people of all orientations. The natural American tendency is to not speak openly of such things, but this Aussie gal doesn't seem afraid of addressing issues head on.

It remains to be seen what kind of waves this type of attitude would cause in somewhat prudish Arizona. My guess though is that Lauren's brand of "out there" would only serve to increase attention for a sport and a team that craves it.

Certainly, this isn't what Ann Meyer is focused on. She's worried about getting her team back into contention after missing the playoffs last season by one game.

"The goal's always to win the championship. Always. That's my background. I've never gone into a situation thinking I was going to lose no matter what the competition was. My first year here we won the championship."

Ann attributed last year's sub-par results primarily to the coaching change as Paul Westhead was replaced by first year head coach Corey Gaines. She added, "We had two players in the Olympics and we had six new players come on to the team (including) four rookies. So there were a lot of changes last year."

Long term Mercury fans I've spoken with and statistics tell a slightly different story. One all too familiar to Suns fans.

The Mercury were an explosive and fast paced offensive team. Ann summed it up this way, "The mindset is to take as many shots as you can. The more shots we put up the more opportunity we have to score...We're all about everybody having a green light. Corey Gaines has really instilled that and I think that helps a lot of the players play in a positive and be happy with their game too. "

This resulted in a team with an offensive rating that lead the league with 106.8 points per 100 possessions (which is better then 10 NBA teams) but struggled defensively coming in last place in points allowed per 100 possessions.

I asked Ann specifically about defensive struggles and what improvements fans might see.

"As much as you say we struggled defensively, I think a lot of it had to do with our new players and certainly the trust factor of somebody moving over one seat. No matter how long you've been in the game, when you are the head guy now, the head person things change. Corey's got a fantastic relationship with the players and they trust him but even in saying that they had to learn how to accept him as a head coach rather than the assistant that he had been for the three years prior."

Ann, a defensive oriented player herself from the John Wooden school continued, "I think a lot of our defense was attributed to the new players not understanding rotations and our veteran players learning to trust the new players."

The Mercury primarily play a zone defense with either a 1-2-2 or 3-2 set which comes from former coach Westhead and is what Coach Gaines is comfortable with.

In addition to having more experience under Coach Gaines the Mercury made a few off season moves to which Ann hopes will improve the team. Last year's starting point guard Kelly Miller and 1st year reserve big LaToya Pringle were traded to Minnesota for Center Nicole Ohlde.

To fill the hole at point, the Mercury traded their 2010 1st round pick to the Sparks for veteran point guard Tameka Johnson.

The Mercury's biggest roster hole appears to be at the backup point where 2nd year Japanese player Yuko Ugo is the only depth.

The Mercury will bring 15 players into training camp on the 17th of May and will come out with 11 on the roster. Ann considers the 10th and 11th spots still open but overall is positive about where the team is even if Lauren Jackson doesn't come to Phoenix.

"You can always get better, but I will tell you I am pretty happy with this team."

Mostly young players. Among the 10 ladies that paid $100 for the opportunity included a 49 year old who had something to prove at least to herself.

Coach Gaines and assistant coach Bridget Pettis ran the women through about an hour and a half of shooting and passing drills which culminated in a 5 on 5 scrimmage based on one standard Mercury play. The play, understandably is designed to get an open look with the league's top scorer, Diana Taurasi coming off a double screen.

While most of the participants showed some experience playing the game, there were two or three that stood out including a speedy little point guard named, Aisha and a fundamentally sound post player, Heather.

The star of the was day was the fresh faced energetic 6' forward, Kalei Nance who flew home to Phoenix just for this opportunity. Kalei won a signed pair of Diana Taurasi shoes after winning a game of "knock out" to close the practice. 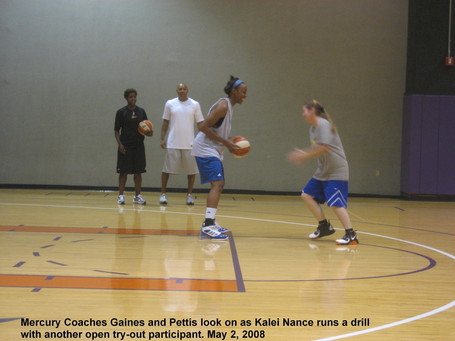 Kalei  is a graduate of Desert Vista High School in Phoenix where she was an all-state player and Addidas Top 10 all-American. She currently attends University of Missouri Kansas City at least until she graduates next week. She played collegiate ball for four years at UMKC, Central Arizona College and New Mexico State.

"I had so much fun. When I found out about the opportunity to come I asked my parents, begged them. I didn't know what to expect. Just the experience, meeting the coach and GM was amazing."

The Mercury will select two of the ten players to practice with the squad in pre-camp workouts. They will likely get to go through a full practice with the entire team but it is highly unlikely they will be included in the 15 players on the official training camp roster. The LA Sparks have held a similar open try out process for years and have never signed a "walk on" player.

Kalei seemed to understand this and has other expectations.

"I just hope I am what they are working for. I have nothing to lose at this point and just to play with better players and get better emotionally and physically as a basketball player. I am just excited for the opportunity if I'm asked."