Suns in love and back for more heartache

Share All sharing options for: Suns in love and back for more heartache

The Suns have issues when it comes to the draft. I have been racking my brain trying to find the source of their problems and to me it comes down to the fact that they fall in love too easily. If this were a teen movie, they'd be the nerdy kid who is head-over-heels in love with the most popular girl in school even though his best friend is just as hot and somebody who he A) actually has a chance with and B) could actually get along with. I have come to this conclusion after going back and reading excuse after excuse for their mistakes in the past 4 (5 if you include last night) drafts.

The Suns always try and convince us that they got the guy they were hoping for...why? Because they find a guy that they like and put the blinders on. It doesn't matter that the perfect girl who not only knows how to make them happy but who could allow them to continue to be themselves is there batting her eyes with her top two buttons undone just hoping that they look at her. Originally this post was going to be a running diary of last night's draft as experienced by my buddy Jermaine and me at the Suns "Twaft" party...but I'm too fired up so let's get straight to the point. 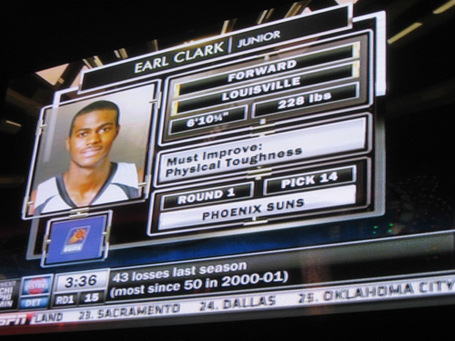 With the 14th pick the Suns selected Earl Clark.

From the first mock drafts everybody had the Suns taking Clark here. Didn't matter who else was on the board, the Suns were in love. The only conclusion I can come to is that this draft was all about Kerr trying to make up for the Marion/Shaq trade.

We all know about the trade to get Shaq the hell out of here and judging by the comments that they made the Suns brass see Clark as a Marion type who is a SF but who can play PF while being able to guard multiple positions on the floor.

Suns fans, Kerr is sorry for effing everything we had going for us up with the trade that brought over the Big Ego. The problem with this pick...the Suns are full of wing players! We had two major needs - a C who is long, athletic and can stay out of Amare's way and a backup PG who can be our PG of the future.

Even if you think Dragic can become a serviceable backup (which I still highly doubt), we need a PG who can step in when Steve Nash is gone. The Suns left multiple PGs who could fill this need for us on the board to take a player that doesn't really do anything for us that we aren't getting elsewhere. Jrue Holiday, Ty Lawson, Jeff Teague, Darren Collison and Eric Maynor were all on the board.

I'm not going to lie to you, I WANTED JRUE HOLIDAY. Holiday is a long 6'4" G who played at UCLA. He played off the ball in a system that wasn't really designed to showcase the immense talent that this guy possesses. Remember Russell Westbrook? Jrue Holiday was this year's Russell Westbrook only taller with better defensive tendencies. Holiday was there for the taking but again, the Suns had fallen in love and were not about to change course just because a "better" option was available. My exact notes from right after the Suns made the pick..."Earl Clark with Holiday on the board! Kerr is a dumb ass - HOLIDAY WAS ON THE BOARD!"

Now as you read this you might be saying something to the effect of "well the Suns are planning on trading for Curry anyway, so the pick wasn't so much about who fits now but who'll fit when Curry gets here and Amare's gone." Have you ever heard of the term "have your cake and eat it too?" They could've had a PG of the future in Holiday (basically what Curry would be - each has a lot of upside Curry's probably a bit more of a sure thing - not by much though) and kept Amare!

Plus, with all of the complications involved in that trade, there is definitely no guarantee that it's going to happen so why not take the PG anyway? Worst case scenario is you have two very talented guards who can each spend time at the 2 spot!

You also have to realize that if the Amare trade goes down and sends the Suns down into mediocrity, nothing is going to be here that'll make Steve Nash want to stick around and we'll need another PG anyway! My point is, this was a draft that although it wasn't a great draft talent wise, was stacked with quality PGs - a position the Suns need to patch up and they decided to swing for the fences to bring in a wing - a position the Suns have pretty well covered. Don't get me wrong, I think Clark has a lot of talent, I just think that there were better options for this Suns team available at 14.

While we're on the subject of Clark (a player who some feel is a top "talent" in this draft class), there are two things that worry me about him as a pro. First, he's compared to Lamar Odom and Tim Thomas. Those two players have the "talent" to be All-Stars in the L but lack what it takes to be great and live up to their talent. Both have great years here and there (basically anytime their contract is up) but fail to do it year in and year out. Clark seems to fit the mold and that isn't a good thing...well, at least until his rookie contract is coming to an end.

Second, he played at Louisville under Rick Pitino. Historically, players who seemed great under Pitino at Louisville have ultimately led to disappointment. I don't know what it is but for some reason his players games don't translate to the NBA - maybe that's why he's better suited to coach in the NCAA.

Look, I understand it's the second round and you're basically just taking a shot and hoping for the best, I understand that. But still, Taylor Griffin is another player that doesn't fill a single need for the Suns. On the board were Patrick Mills (who played great last year for the Australian olympic team), Jack McClinton (who was a solid college PG) and AJ Price (a long shot to do much in the pros, but I would guess he could challenge Dragic for the backup PG minutes). Yet the Suns took Taylor "Hey, I used to beat Blake at 1-on-1 when we were kids" Griffin. Sorry, I couldn't resist.

Now, I'm sure the Suns will be quick to tell you that Earl Clark is going to fill multiple positions for them, or that he'll bring up the defensive intensity or that Earl Clark and Blake Griffin pulled a "Face/Off" and each is secretly the other because Griffin couldn't bare the thought of playing for the Clips and Clark wanted to know what it feels like to be #1.

And I'm sure they'll try and convince you that Taylor Griffin was higher on their board than his brother Blake or that he completely dominated the still chair during workouts. But the simple truth is that the Suns are just a bunch of hopeless romantics looking for the fairytale ending where they go home with the prom queen but repeatedly ending up with nothing more than heartbreak and a slap in the face as they stand alone in the dance floor watching Rondo, Deng, Fernandez, Garcia, Robinson and now Holiday dancing happily around them.