Twitter has taken over the national conscience and is the hot topic of conversation. This is certainly true in NBA circles where the Shaq-led twitterevolution now claims 41 verified NBA player accounts according to directory and verification site Sportsin140.com.

A recent article in the Harvard Business Review got me thinking about how just how widespread the twitter follower-ship of these athletes might be. HBR's study of 300,000 twitter users found that "the top 10% of prolific Twitter users accounted for over 90% of tweets". I am fairly sure I am in that 10% btw, since I tweet at least 5 times a day and have a total tweet count of 3,722 since July 08.

The HBR study prompted me to do some quick analysis of the NBA athlete twittersphere.

Here's the results in 140 characters or less:

and a visual aid showing the distribution of NBA athlete Twitter followers. 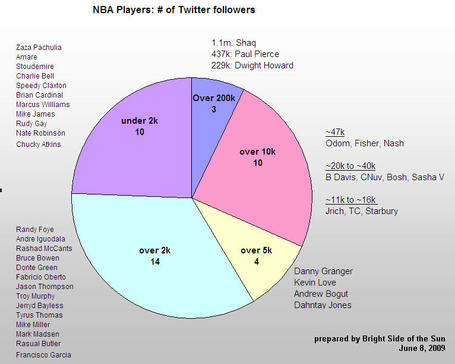