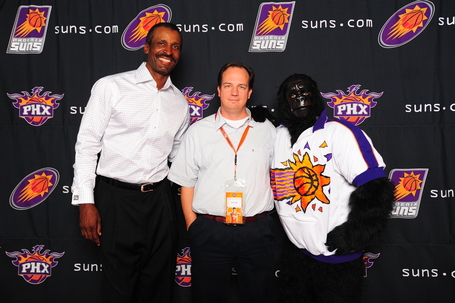 I recently went to a Continuing Legal Education course put on the Suns.  In addition to getting one of the fifteen hours I need every year, I got this picture, a sales pitch and I heard Steve Kerr use the phrase "salary dump."  I thought I'd take a minute to pass on some of the highlights of the CBA, because it was eye-opening to me.

"BRI" is "Basketball Related Income" and is nearly all revenue in the NBA.  According to the Suns' attorney, it has about a 70-page definition.  From this, we get several important numbers (I think I'm right, I didn't take notes and they served free beer):

The salary cap is set at 51% of the projected BRI for the upcoming season, minus projected player benefits, and divided by 30 teams.

The luxury tax is at 61% of the projected BRI, minus projected player benefits, and divided by 30 teams.

There are about 8 exceptions to the salary cap -- that is how you can be over the cap legally.  The most interesting one is the "Bird Exception" (because Larrry Bird was the first to use it).  A player who has played for your team for at least the last three years and re-sign for any amount and that amount is not counted against the cap (but it counts against the luxury tax).  It's not that the player's team can sign him for more, its that it restricts that player's team less and therefore makes him a less attractive free agent target.  For us fans, the question becomes whether another team is going to offer Amare the max, given this restriction.  To give him close to $20M/yr with a $57M cap means that you've got to have a lot of other players on your team with one of the other exceptions to the cap.

As most of you know, the tax money is put into a pot and divided amongst the non-tax-paying teams.  The Knicks paid over $24M in tax last year with a $71M threshhold -- that's a $95M payroll.  The Suns paid $4.9M, the lowest of the tax-payers.  Also on the list: Mavs, Cavs, Celtics, Lakers and Blazers.

Ticket sales is about 37% of revenue for the league.

There is a revenue-sharing system in place, but teams get 100% of revenue if it occurs within certain geographic locations (maybe it's not 100%, but my understanding is that it is quite a bit).  Again, the specifics are in the CBA tome, but it essetianlly means that if you buy an Amare jersey in Phoenix, the Suns get all the profit but the Suns have to share the profit if someone in Atlanta buys an Amare jersey.  I think that Tucson is outside of the radius, which would explain why teams like the Cardinals and the DBacks make more of an effort to reach out to those fans.

This geography-based revenue-sharing  thing, coupled with the inability to broadcast on Fox Sports AZ at the same time as TNT, means that the Suns make less money on a TNT broadcast than a Fox Sports AZ broadcast.

Aside from the trade restrictions (e.g., getting within 125% of salaries if both teams are over the cap), the front office needs to successfully navigate all the cap and tax restrictions as well.

In regard to player contracts:

Most are guaranteed against a "lack of skill" (i.e., you can be cut, but they've still got to pay you).

Steve Kerr's first contract prohibited him from engaging in "counter-revolutionary activities" -- I guess he would have been barred from stopping any secessionists or insurgents.

Amare Stoudemire is not permitted to go SCUBA diving without a licensed diver with him.  He is not allowed to own a motorcycle, but he is allowed to have a convertible.

Oliver Miller's "calorie cap" actually existed and the Suns' have a special scale able to  reach weights high enough to monitor his weight.

Sarver indicated (as he's done in the past) that he made some mistakes.  This, of course is with hindsight being 20/20.  E.g., signing Richardson at the expense of not extending Johnson during the summer of 2004.  He said that in his business world, he was pretty good at making decisions, and that with the benefit of hindsight he was probably right over 80% of the time.  He claims that player personnel decisions are much more difficult to predict and that if you're over 50% you're probably doing a good job.  I tend to agree.  In business, banking and construction, there are long-term trends and patterns that are susceptible to documentation and study.  You're looking at the general activities of a large sample size and making very educated guesses.  With athletes, how is one like the other?  What can the past experience with Stephon Marbury tell your about the future success of Steve Nash?  Sure, there is some anecdotal information and some "gut feel" stuff, but that is about it.  In the end, it seems to be about how good your gut is.

I went to the "Town Hall" a few months back and got hot dogs, chips and soda.  A bunch of lawyers show up and there's complimentary wine and beer along with fancy food.  Just sayin'