Share All sharing options for: Introducing the SuperLuxury Tax because the Free Markets Don't Work and Democracy is Dead 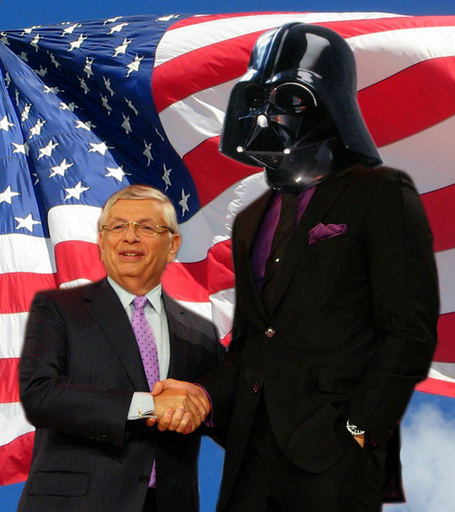 Dear Friends - I'm sorry if I have distracted you on a bit on this post. A Cliff Notes version says -

How American values are illustrated in government and in the NBA appear different, but what is central to both is a sense of Fair Play. I consider how prospective owner Mikhail Prokhorov might tilt the tables of fairness and consider several stronger forms of the luxury tax.

The luxury tax was instituted to promote fair competition, but harms good teams that want to go over the tax to compete but cannot afford it (Suns), favors teams that can afford the tax (Lakers, Mavericks, the new Brooklyn Nets) and promotes NBA Slum Teams (Clippers, Grizzlies) with undeserved payments to rich owners (Sterling) that do not care about their teams. A stronger luxury tax would only exacerbate these problems.

I instead propose [1] Hard Caps and Slum Floors, that all teams must remain in a banded salary range no matter what, [2] the elimination of luxury payments (still allowing for other forms of profit sharing) and [3] because all teams are in a tight salary band, ESPN trade machine and trade restrictions could be completely disbanded, allowing for any trades as long as both teams remain in the salary band.

The interesting thing to discuss here is whether and how to change the luxury tax. Your opinion on this topic would be of great interest. I'm not recanting anything here, so read with a molecule of NaCl and at your own risk!

Few things are more American than Democracy and the belief in Free Markets, where self-interested individuals determine their own fate to the betterment of society. One of the greatest moments of all-time cheese is in Star Wars Revenge of the Sith when our hero Obi Wan Kenobi proclaims "My allegiance is to the Republic... to Democracy!" right before slashing all of Skywalker's limbs off in one swing and then cowardly scurrying away from the rude scent of boiling flesh. Of all the stoopid cheesy moments in the history of George Lucas films, turning Star Wars into a bad high school civics lesson is among the worst, but it just goes to show how we feel about Democracy, Freedom, and really good CGI. It is, therefore, fascinating to watch the very antithesis of the American spirit unfold like a soap opera in that foreign country that we call the National Basketball Association.

The National Basketball Association appears to reside on U.S. soil, and its president, who is called a commissioner, carries a U.S. passport. Even the "National" refers, so I'm told, to the American nation in which the NBA is incorporated. Its only elected official, the commissioner, serves under no term limits and has wielded power since 1984. The world population has grown by 2 billion people and McDonald's has sold more than 100 billion hamburgers since then. There is no democracy in the NBA.

There also is no Free Market either. Wages are set by strangers whose goals are hard to fathom. A senior worker whose skills are worth $500,00 US dollars is deported because it is against the law to pay him any less than 1 million US dollars. Similarly, the best workers in the land might be able to negotiate far better salaries in a free market than what they get in the NBA. In fact, some of them are starting to trickle out of the nation because the free market is better in another country. Apparently the taxes are cheaper too! Finally, there are the business owners. They are not allowed to hire the best talent even if they are willing to pay more for it. On the other hand, no matter how badly managed some companies are in the country called NBA, none of them are driven out of business by competition. Unlike the USA, failure and bad management in the NBA is carefully rewarded by an influx of cheap, valuable labor.

It seems that the NBA is nothing like the USA. If the NBA were a real nation, we would have already declared war on it. So, how did the NBA get here? Is the NBA a message that democracy and free markets, as exemplified by our abysmal economy, are failures?

There is one other greater American principle. A deeper magic that guides and undergirds the genius of the American way of life, the guardian angel of our manifest destiny. Fair Play. Fair play is equality and equal opportunity. Fair play is transparency and trust. Fair play is self-determination. Fair play is insuring that good work is rewarded, so that people everywhere in our country and the world abroad choose to do good work in their own self-interest.

Fair play is the one justifiable encroachment on Free Markets. Without Fair play, there is no democracy and no free market. Fair play in elections. Fair play in the stock market and in accounting. Without Fair play, we are villains, savages, animals...worse. So important is Fair play that the US Government and its Congress regularly invade the small countries of Major League Baseball and National Basketball Association, taking away their liberty, not to institute a banana-republic-styled democracy or free market principles, but to secure Fair Play. While the NBA can live without democracy and with severely limited free markets, it cannot live survive without fair play and it assiduously attempts to at least portray the image of fair play. More so than sport itself, Fair Play is a national pasttime, a national preoccupation.

However, I see the coming of Prokhorov as the potential savior of Fair Play, rather than its antichrist. The Luxury tax is not really fair to begin with and the NBA will now be forced to reconsider it, thanks to comrade Mikhail.

Here are a few possibilities for the new CBA. 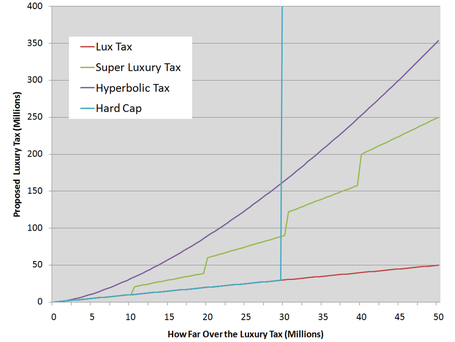 Considering these options, the luxury tax is currently a system where wealthy NBA owners improve their chances of winning by bribing poor NBA owners. Poorer NBA owners who would like to spend more on their teams cannot afford the luxury tax and are forced to shed valuable talent to richer parties so as to avoid the tax. Other poor owners find it quite profitable to run NBA slum teams that get by on welfare in the form of draft talent, profit-sharing and luxury tax bribes. These slum teams are the Washington Generals to the league's Harlem Globetrotters. In the old comicbook, The Tick, supervillains were so hard to find that superheroes often paid supervillains to fight and be vanquished. The numerous attempts at fairness in the NBA in the form of welfare creates opportunities for teams with wealthy owners to pay poorer teams to be their losers.

The SuperLuxury and Hyperbolic Luxury Taxes only magnify the bribes implicit in the current luxury tax. The luxury tax must go, along with its bribes and salary restrictions on trades. The Diamond Cap and the Slum Caps are the direction the league should go, with careful determination of the cap boundaries. Tighter bounds would partially reduce the impact of ownership wealth (or ownership's desire to run a slum) on team performance.

Moving in this simpler direction would also give a reason to ease or eliminate the current debilitating salary restrictions on trade. As long as teams are between the Slum Floor and Diamond Cap, any trade is possible. ESPN's Trade Machine could be retired, GMs would no longer need armies of lawyer-rocket scientists to work out details.