DeWanna Bonner: Rookie of the Year

Share All sharing options for: DeWanna Bonner: Rookie of the Year

As the WNBA season winds down with most teams only having a couple of games left in their regular season schedule the talk naturally turns towards the big awards. Most Valuable Player. Defensive Player of the Year. And of course Rookie of the Year.

In last night's 100-82 victory over the Atlanta Dream, the Phoenix Mercury were paced on the offensive end by their ROY candidate, DeWanna Bonner. In their second and final head to head match-up of the season, Bonner outplayed her leading competition for the award, Angel McCoughtry.

Bonner, the fifth pick out of Auburn, had a fantastic night rising to the challenge with more focus on patience on the offensive end then we normally see from the high energy rookie. Her 20 points on 6 of 10 shooting including a rare three pointer was just one point shy of her career high. Bonner lead the Mercury on the glass with 7 boards off the bench in 24:21 of play. Add to that her two steals and one emphatic block to end the first half and she once again managed to be an impact player on a team filled with stars.

It was the right thing for the young player to say but her performance Saturday night in Phoenix told a slightly different story. She was aware of the challenge and she rose to it and put up one of her better games of the season.

On the other side of the ball Angel McCoughtry, the first pick out of Louisville, looked sluggish and her shots spent most of the night rattling off the rim. She was 2 for 11 for 7 points in 22 minutes.

Before the game Angel also said she wasn't focused on the individual award, "Actually, that's not really a concern of mine. We're just trying to make the playoffs. We've got to get this one tonight. She's a good player and if she gets it then she definitely deserves it."

Unfortunately for those of us looking for a great battle, the Dream were on the last game of a long 5 game, 13 day road trip including a game the night before in Sacramento. In that game McCoughtry put up 27 points and 10 assists and looked much more like the ROY candidate and future all star that she is.

The Case for DeWanna

DeWanna Bonner began her professional career with a 16 point, 11 rebound performance against the defending Western Conference Champion Silver Stars. Since then she's recorded 18 double figure performances, five double doubles and has lead the Mercury in rebounding despite never having started a game. 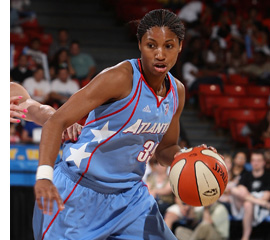 Her energy and effort level has never varied as she's brought a spark to the team both on and off the court from day one.

McCoughtry admits to starting the season slow and attributes her recent surge to hard work, "I struggled in the beginning trying to find my role on this team and I worked hard for it."

While Bonner has been in the ROY discussion from the first week of the season, McCoughtry has only recently entered the conversation after putting up impressive numbers in the absence of the injured Chamique Holdsclaw.

McCoughtry is without a doubt a great basketball player. She's intense and focused and plays both ends of the floor. She's the kind of player that wants the ball and wants to be her team's leader. As a rookie however on a team that is well balanced and also well lead by Holdsclaw she has not delivered the same kind of impact as Bonner.

As a scorer who needs the ball, Angel showed last night how ineffectual she can be in games when the shot isn't there. Great wing players, and the Mercury have a couple of the greatest, are able to bend the game to their will either on the glass or by creating for their teammates. McCoughtry will surely improve in these areas as her game develops but for now her 2.7 rebounds per game and 2.1 assists per game show the limit of her ability to contribute in other ways.

DeWanna Bonner on the other hand has changed games on numerous occasions for the Mercury with her ability to rebound and defend. She understands her role well, "I just try and go out there and defend. I focus on defense, get a couple of steals, get a couple of easy buckets. I try and get my points in ways that we lack like offensive rebounding. I still look to score when I get the ball. When the play is called for me I still look to be aggressive but we have some great scorers on our team."

This makes Bonner's 11.5 ppg this season all the more impressive. Not to take away from Angel's 12.4 ppg but her buckets come as part of her team's regular offense while Bonner is more often then not finding and creating chances to score that don't take away from her teammates' opportunities. Those kind of "found" points are a big reason why Taurasi and Pondexter once again lead the WNBA in scoring and yet the team as a whole is more balanced.

A look at both rookies statistics on the season show two impressive young players.

Both players have about the same number of minutes on the season and both have very similar shooting percentages. The disparities there that stand out are Angel's better (but still not impressive for a wing player) 29% three point percentage while Bonner holds a significant edge in free throw shooting (80% vs 73%).

On the defensive end, McCoughtry has recorded a very nice 2.1 steals per game which leads all rookies and is good for 6th in league. But while Angel creates more turnovers (2.5pg) than Bonner (1.1pg) she also turns the ball over almost twice as frequently as DeWanna and also commits .6 more fouls per game while playing further from the basket.

On the glass the comparison isn't even close. Bonner averages 3.2 more rebounds per game which more than overcomes the .9 points per game edge that McCoughtry holds.

I am not a huge fan of the combo stats like the Efficiency Rating because they rarely tell the full story of a player's true contribution but in this case Bonner's 12.84 EFF compared to McCoughtry's 11.31 EFF supports the more well-rounded player.

You can't talk about rookies without talking about potential. Both of these players will be in the league for a long time and both will likely be all stars within a few more years. Naturally, they both have areas of their game that they can improve.

Bonner will play this winter for a team in the Czech Republic (Brno) where she is slated to be a shooting guard. This will be a great opportunity to work on her perimeter game including her distribution and outside shooting. She has also struggled at times finishing near the rim as she can't absorb much contact without being knocked off balance. She may never really bulk up but she can like most young players work on getting stronger so she doesn't have to rely on getting calls when she's driving to the basket.

For the Mercury she's earned most of her minutes at the power forward spot and has clearly demonstrated that despite her slight frame, she has the energy, tenacity and length to rebound with much bigger players. She hasn't displayed much of a back to the basket post game but like many power fowards in the WNBA can attack the rim from the high post or elbow extended. Her step through move from the free throw line leaves defenders in her wake as she covers so much ground with one long stride.

DeWanna Bonner is a very special player who combines a unique combination of athletic ability, skill, energy and passion for the game. She can play multiple positions which makes it nearly impossible to keep her on the bench. She's also a fan favorite with her hustle on the court and humor and outgoing personality off.

McCoughtry has a more traditional game perhaps suited to be in the mold of a Diana Taurasi in that she can both score in a variety of ways and play defense against either bigger or smaller players. She needs to get stronger and work on attacking the glass and learn to better fit in with her team and find other ways to contribute beyond her scoring. Unlike Tuarasi, McCoughtry doesn't have nearly enough range on her outside shot and while she can create space and get by her defender she doesn't yet have the vision or passing skills to take full advantage of the opportunities she can create.

Angel is an extremely talented scorer who is intense and focused. You can easily see her as a top 5 point leader in the league and if she continues to work hard to develop her all around game could be a potential MVP in 5 to 7 years.

I haven't had the same level of exposure to McCoughtry as I've had with Bonner this summer so at this point I have to deviate from any semblance of fairness. I am sure Angel is a great person but I can't speak to that like I can with the dynamic rookie who plays in my home town.

DeWanna Bonner is the kind of player who any franchise would love to have. She works hard. She's a naturally and genuinely fun person and yet despite being a bit of a goof in the locker room she is also a fiery competitor on the court. She works hard and has a great understanding of her game and how she can improve.

Her combination of personal appeal and effort has quickly earned her a large following within the Mercury fan community including both my 10 year old son and 12 year old daughter who have deemed DeWanna their favorite player. My son said he liked her "happiness" while my daughter enjoys watching her arms and legs flying all over as she outworks her opponents.

In a league where every little bit helps, the kind of value that Bonner brings to team in terms of fan appeal combined with her positive impact on team chemistry makes her an obvious choice for Rookie of the Year (in my completely unbiased opinion).