Ed note: I am making it my personal mission to write the cheesiest headlines I can come up with. Starting now. Your ideas are always welcome.

"While it doesn't necessarily feel like beating the world champs it would have been a disastrous loss so we came out and got it going and did enough to win," said Steve Nash with the best possible recitation of the obvious.

I think I am going to end it right there. There's really nothing left to say is there. You can only improve on perfection so much and like his 15 assists in 28 minutes and 50% shooting we are talking about a guy who can do it all. On the court and in front of the microphone. Ladies and gentlemen, your almost All-Star, (thank you, China) Steve Nash.

The man of the night was Goran Dragic who single-handedly blew the game apart during a 5 minute stretch to open the fourth quarter. And when I say single-handedly that's really a lie because he even finished at the rim using his right hand. Lets get to that.

Point guard master and mentor Steve Nash had this to say about Dragic's play, "He scored with his right hand for the first time in two years. Goran's playing well. <insert Nash chuckle> He's a talented kid and he's getting better and better...I'm excited for him and the better he plays the better our team is."

Goran meanwhile had this to say about his seldom used right hand, "I know how to finish with the right hand but I don't know, all the time I finish left so it's a bit different. In the future I have to penetrate more right and left so the defense will not know where I am going to go."

Right hand. Left hand. Whatever. The kid came off the bench at the start of the 4th quarter with his team hovering around 11 points. On the next possessions he assisted on a Richardson layup. Hit a jump shot. Hit that right hand layup. Got to the line and hit two free throws. Rebounded a miss from Lou. Grabbed defensive rebound. Stole the ball and was fouled and hit both free throws. The lead at that point was 17 and of the 11 points the Suns had scored, Goran was responsible for 9 of them.

From there Richardson took over and that was it. Game over.

Jason had a very interesting comment about playing off the bench and not with Nash which jives with something I've been saying (which of course makes it all the more interesting) , "It's a little bit more freedom going in there and creating the scores. With Steve he makes the game so easy you don't really have to do much. Going in with the second unit I'm being a little bit more aggressive doing the things that I am normally doing and just playing hard."

I've certainly had the sense that his game was getting lost as Steve has been more aggressive with his shot this year and between Amare and Nash there's not been enough "balls to go around". Playing big minutes without Steve, Jason can fill his normal role where he's been successful in this league. He's a guy that needs the ball in his hands and tonight, on his birthday, he delivered 26 points on 10 of 14 shooting in just 28 minutes. Jason also had 7 rebounds - can't forget that.

I am not sure if he will continue to come off the bench. Leandro is still struggling although he did have a slightly better game going 4 of 9 in 20 minutes. Frye meanwhile continued to his funk - 14 minutes and 2 points/3 rebounds and was absolutely torched by Brook Lopez in the post. I feel for Channing. He's a great guy but right now he's a long way from how he started the season.

In the big battle of the twin bro's the winner was clearly the one with the fuzzy head. Robin had another great game setting another career high with 20 points. Brook had 26 but it took him 22 shots to get there while Robin was 8/10.

We are seeing the emergence of Robin right before our eyes. Not only is he a defensive presence in the paint and big reason why the Suns ended up out-rebounding the Nets 44-42. And to top off the brotherly domination, Robin lead all players with a plus 29 while BroLo logged a minus 26.

Robin is playing smart basketball, picking up only 2 fouls in a game where his emotions easily could have got the best of him. He said this about that, "That's just me just being more comfortable on the court. Becoming a smarter player. Being more selective on when to go for blocks and when to go for steals."

Robin can't take all the credit. According to Amare, Amare deserves some of that, "I'm talking to him and trying to give him that confidence and give him my knowledge of the game to help him out on the basketball court. I can tell he's grown, he's a student of the game, he wants to learn and he's done a great job at it."

That's high praise from the master to the pupil. Perhaps Amare also taught Robin some of that swagger like he displayed when he "struck a pose" after being finishing after being fouled by Kris Humphries (who apparently is still in the league).

Amare might have also be teaching Robin how to catch and finish on the pick and roll. Late in the game he and Goron ran the play on the right side and Robin displayed amazing agility and touch for a man his size. He caught the bounce pass and deftly avoided charging into Yi while moving the ball to his right hand for a soft finish. I seriously can't think of another man his size in the league that can make that play. Not Bynum. Not Bogut. Not Howard. Ok, maybe Howard but still. Wow.

I asked Robin about that play and he got a little choked up, "You know. Um. That just comes out of you know me and Goran, Goran and me working really hard in the off season. We were always working on our pick and roll together."

Yes, that explains the timing and the pass but you can't teach a guy that size to catch and finish with that kind of agility. Seriously.

I saw glimpses of it two years ago in Vegas Summer League when he drove the ball on a face up from the free throw line dropping a 360 spin move in the lane and finishing at the rim. I was shocked when I saw that and it's one of the reasons why I've stayed patient with Robin. His physical abilities are ridiculous for a man his size. Finally, it's paid off in a real game situation and I don't think we've seen the last of that.

I just wish he would be a little less humble talking about it. I want to hear Robin say something like this in response to my question about that play. "Hell yes. I got moves like a small forward in the body of a monster. I will run over guys or I will go around them. Those fools can't stop me."

Photog Max Simbron even managed to catch that play which to me was far more impressive than any of his dunks: 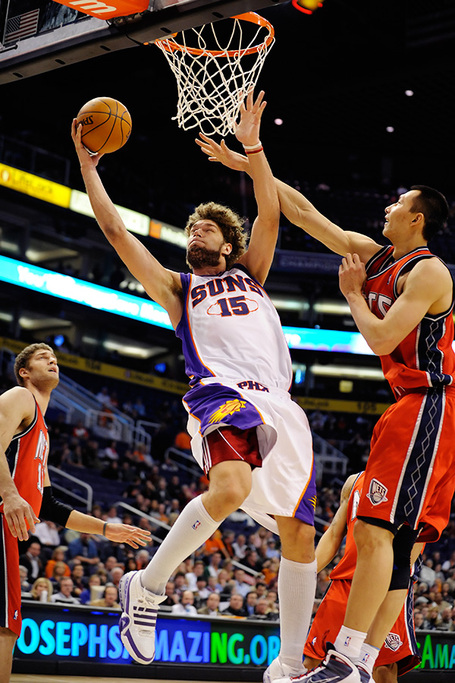