Ladies and Gentlemen, Goran Freaking Dragic. 18 points in the fourth quarter on a night when Steve Nash's 36 year old body once again wasn't able to deliver the MVP caliber goods.

Goran and his benchmates, Lou Amundson, Jared Dudley and even Earl Clark were the difference in the game according to coach Gentry, "I thought that the unit that we had in was really kind of the one that got us over the hump. We had Goran, JD and Lou, Chaning and Earl; those guys really did a good job for us. I was really happy with Earl and the defense that he played on the court and I thought he had some good open shots that eventually he'll make."

That unit, lead by Goran, turned a 1 point deficit into a 6 point lead in the first four minutes of the final quarter. The Warriors fought back and closed it to 1 but Gentry left them in until just under four minutes to play when Nash and Amare returned to close it out.

At that point, Lou hit two fourth quarter free throws, a certain cause for celebration, and then came the play of the game.

In an eerie repeat of Rose's dunk on Dragic last night, CJ Watson steals the ball on a bad pass from Nash and races up the court for a break away dunk. 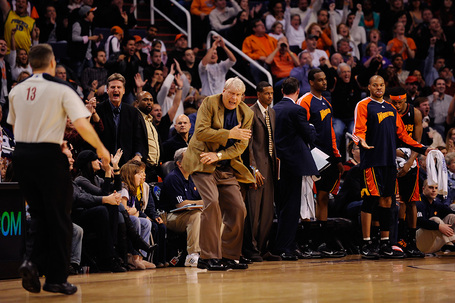 Dragic chases him down this time gets the block on Watson. Dragic was pumped. The Suns were pumped. And the crowd was definitely pumped.

Don Nelson however nearly needed to have his chest pumped as he exploded in rage that foul wasn't called. That earned him a T as well as being the subject of this great photo. (I need to see the replay to say if Nellie had a legit gripe. I am guessing he did.)

Nash hits the Technical and instead of a 1 point Suns lead it's a 5 point lead as the Suns score off Goran's block.

Goran Dragic had the Derrick Rose dunk play fresh in his mind and immediately brought it up when asked about this block, "Yesterday D. Rose got me on a poster and today I knew that Watson is not like Rose so he would not jump so high, so I just tried to block it and I made it." 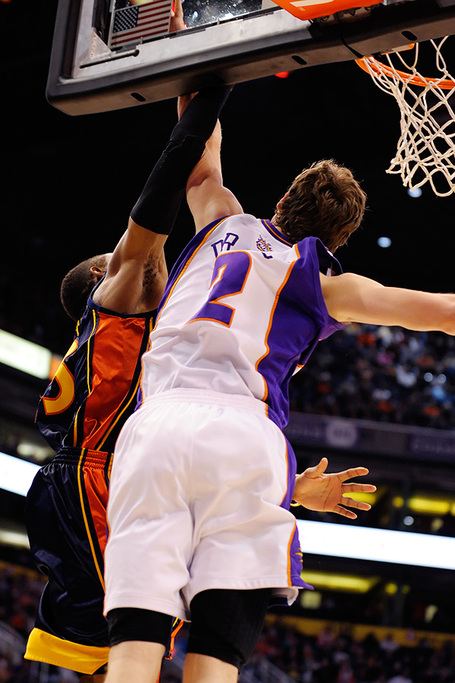 From that point with about 3:14 to go, the Suns went on an 8-3 run and extended the lead to 10 points (their bigest lead of the game) with 23 seconds. During that stretch Dragic had a steal, a big rebound and hit the dagger three.

The Slovenian Prince finished the game with a career high 20 points along with 4 steals, 2 assists, 3 rebounds and that awesome blocked shot in only 26 minutes of play. Oh and that 20 points came on only 8 shots. That is how you say efficient in Slovenian.

How can you not love this kid? He knew his tired team needed him to step up and he did on both ends of the floor.

Master Nash was quite appreciative of the performance as well, "In particular Goran was great tonight. He made some big shots. He had that look in his eye, he was really aggressive. It was fun to see him make some key shots and big plays."

With Leandro now out for the next month, Goran will have plenty of more opportunities to step into that role of bench scorer on nights when the team needs a lift. LB however, doesn't bring the impact on the defensive end like Dragic can.

Amare Stoudemire (15pts/5 rebounds) getting out-worked and out played by Anthony Tolliver (19 points/11 rebounds) wasn't a pretty sight nor was the Suns defense that gave up 49% shooting to the Warriors in the first half.

Out of the locker room Coach Gentry said he adjusted his defense to play up tighter on the shooters and as a result held the Warriors to 18 of 47 in the second half and gave up only 43 points in the final two quarters of play.

On other nights, the Suns gladly would have traded buckets with the Warriors in a high scoring affair but with the team still suffering from a collective shooting slump, it was the defense that came through against the high-powered (and short-handed) Warriors.

I am sure many fans will fret over how close the game was but as Alvin Gentry said, "It was a win and we'll take them any way we can get them right now."

If you can get past all the short-comings on the Suns' roster and the possible Amare trade looming large this was simply an entertaining and well fought game. Both teams played last night and yet both teams managed to deliver a high energy, competitive contest to the fans. I'll take it.

Robin had another very solid start. 30 minutes, 16 points on 4/6 and 8 for 8 from the line(!). I'm not even sure if his 9 rebounds or only 1 foul is more impressive especially since that one foul came about 45 seconds into the game.

Lou played solid D and had 9 rebounds in only 15 minutes. Lou had this to say for himself, "We just needed to make sure they only got one shot so there was no offensive rebounds...Maggette is a 3 slash 4 so I was guarding him there for a bit. He's a tough guard but I think size is definitely something that hurts him a little bit."

Gentry was so impressed with Lou's play on Corey that he left him in the game to play the 3 along side Robin and Amare which is a lineup I've never seen before. That's what playing the Warriors will do to you.

Richardson unfortunately, didn't play well after looking like he might have been getting on a role in the 2nd quarter.

Dudley was Dudley and as Gentry said, Clark came in and at least played good defense. I still want to see him turn down some offensive opportunities and just focus on defense (which is exactly what I wrote about him during pre-season).

There's no question the Suns needed this one after losing at home to the Bulls on Friday.

"It was a big win. It would have been a devastating loss. It wasn't pretty but we had just enough toughness and depth tonight to pull through when we weren't really playing our best," Nash said before admitting that his body still isn't at full strength. "I didn't feel good actually but I felt a touch better than last night."

Game Highlights (but they didn't include Goran's block!!!)