Sun Sets on Mavericks/TNT Curse Behind Defensive Effort - In Phoenix!

Share All sharing options for: Sun Sets on Mavericks/TNT Curse Behind Defensive Effort - In Phoenix!

You know what they say, defense and rebounding wins championships and tonight the Suns defense was clearly the story of the game or at least the final chapter where the Suns held the Mavs to 6 of 21 (28%!) in the fourth.

Amare Stoudemire was not part of that. He did have 22 points in 26 minutes on a nice 7/13 shooting night but his 1 rebound and 5 turnovers must have convinced Coach Gentry that it was time to do put aside egos, or trade value implications, or offense for that matter and just get the win the old fashion way. Defense.

Amare was all good with it in the locker room. Saying the right things, smiling for the cameras, "It's all good. I brung out the pom-poms for the fourth quarter. They did a great job out there on the court so I just had to cheer them on...We got the win which is the most important thing so we've just got to live with that."

Amare said this was the first time he remembers sitting out a fourth quarter.

It's hard to say what this means for the future but Coach Gentry did his best to beat down that kind of speculation,

"He's been a great teammate this year. He understood that we were going pretty good with Lou and the way the lineups were we were switching a lot of things. It was just the way it worked out. At the end of the day the guy had 22 points for us. He helped us win as much as anyone. So I wouldn't read anything into that at all. Hey, I took Steve out to put Goran in defensively and we talked about it the other day. We just got to do whatever we think we need to do to help us win the game."

The best compliments for the Suns came from the Mavericks.

Jason Kidd, "Their second unit was a lot better than the guys that were on the floor."

Jason Terry, "We've got to get the ball into people's hands that can put it in the basket."

Oh, Jason. Were you not happy with your 1 for 4 shooting in the 4th quarter?  Were you looking to shoot more? 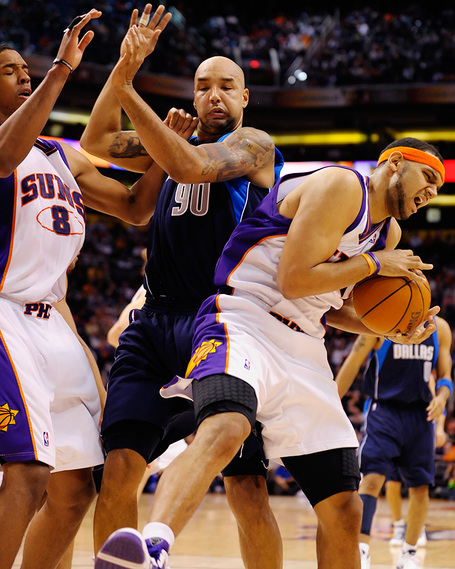 The difference for the Suns between the energy and defensive effort between the starters and the bench was night and day and it started in the second quarter where the reserve unit of Dragic, Dudley, Frye, Amundson and Clark out scored Dallas 18 to 15 and changed the tone of the game after a slow start that had the Suns down 20-10 within a few minutes.

In the fourth quarter it was the combination of Hill, Dudley, Frye and Amundson that picked up the heaviest load with Dragic playing the first 6:38 before Nash was able to come in rested and ready to close out the final 5:22.

Dudley said this about the different approach the Suns took to winning the game with defense, "We had a line up that we could just switch so much different and between me and Grant switching on him we definitely limited Nowitzki and Terry in the second half."

Hill and Dudley both did a great job on Dirk. He finished with 19 points on 11 shots and had 10 FTA's but in crucial fourth quarter the Suns held him to only one attempt (a miss) by playing him physical off the ball and denying him his spots. You have to defend Dirk before the catch and make him work to even receive the ball and Hill and Dudley did exactly that.

Switching picks was certainly also a big key to the Suns defense in the fourth quarter. With that group on the floor they were able to mix it up and didn't let the Mavericks use screens to get open looks like they had earlier in the game.

Physical, smart, aggressive defense. About as common of a sight in Phoenix as snow but just as exciting and welcome. 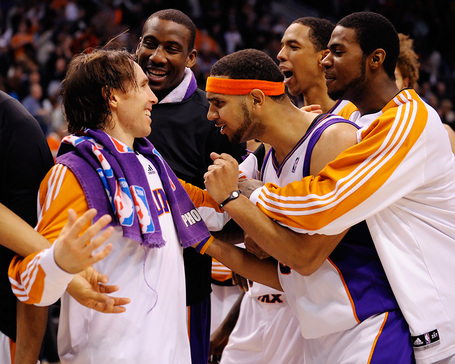 You may not resume your regularly scheduled trade talk.