Daily Links AND Practice Report: A Double Whammy Of No Trade Talk

Share All sharing options for: Daily Links AND Practice Report: A Double Whammy Of No Trade Talk

That's not entirely true. There's no way this story ends without trade talk coming up somehow/somewhere even though I can swear to you that right now, I have no intent or specific trade related thing to say. And yet....we all know what's coming.

Busy day, so I've not had a chance to transcribe the Nash or Gentry scrums and there were some good things in there like:

Nash is picking the Colts to which Paul Coro joked, "Offense wins championships" to which Steve responded, "The Colts defense is improved and it's not like the Saints are any better." Or something like that. Funny exchange

Nash talked about Kurt Warner retiring and said that while he's not close to that point he understands what Warner is going through (went through as of 1pm MST). He also talked about getting how guys like Brett Favre and Michael Jordan could think they were done but realize how much they miss the game.

Warner retiring can't help but make you flash forward to the day when Nash hangs them up. I am pre-sad.

Basketball-wise, Nash went back to the "having the right mentality and spirit card" as being the key difference between playing good and playing not good

Gentry was complementary to Payton Manning and sounded like his head was with the Colts, he said he is pulling for the Saints as the feel-good story.

Regarding Jason Terry's half-time comments to Cheryl Miller on TNT about the Mavericks being able to score on the Suns because they (Suns) don't play defense. Gentry said the Suns heard the comments and he (Gentry) would have been mad if they (comments) weren't true. He wouldn't admit to it, but one has to assume it fired up Gentry to pull out all of his defensive guns in the fourth after giving his starters a chance to respond in the third.

After the road trip the Suns will have only one game over a period of 10 days that includes the all-star break. Gentry said the Suns are looking forward to that opportunity to recharge.

The team was understandably in a better mood. Channing Frye even messed with me by flicking my microphone while we were talking to Nash. That's the second time he did that to me while talking to Nash. The last time was in November after running some poor team out of the gym.

Coolest Links EVER! (no hyperbole....which is like saying 'no homo' after saying you want to lick your buddy's toes)

You all know I am a big Goran Dragic fan going way back to last year when many people....weren't.

But this is not acceptable, kid.  (h/t Jared Dudley twitter) 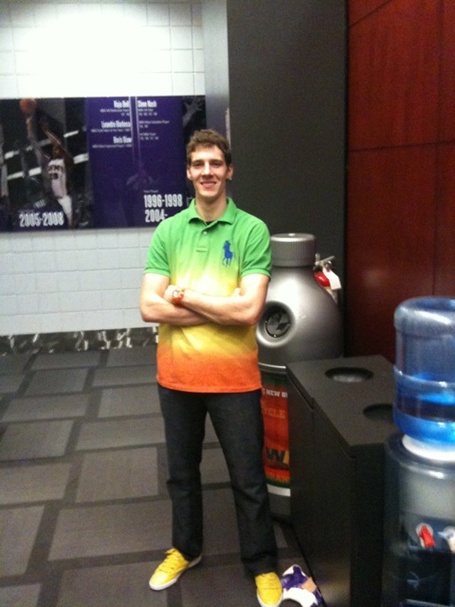