Game Preview: Suns vs D Wade (and some other guys from Miami)

Share All sharing options for: Game Preview: Suns vs D Wade (and some other guys from Miami)

When you talk about Miami really you are talking about this guy... 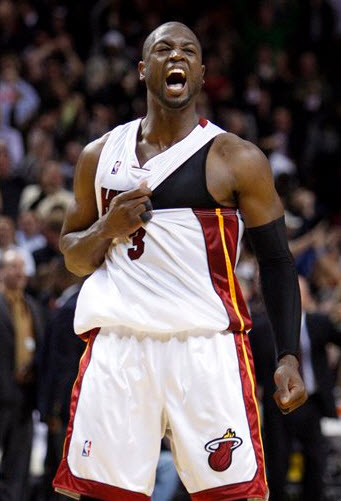 He is awesome and well worth the price of admission. My only problem with Dwyane Wade is that his name is spelled wrong. Normally, it was "Dwayne" but no. This guy is special and his momma obviously knew that at a very early point and therefore spelled his name in a unique way befitting his super-star stature that she so clearly anticipated.

I am absolutely convinced that if Wade was playing on a better team and/or wasn't playing at the same time as Kobe and LeBron that he would be an MVP.

We've seen Wade torch the Suns in the past and he especially seemed to feast on Raja Bell's (overrated) defense. But that's in the past. Early this season the Suns did a great job holding Wade to 7-18 shooting and used the zone defense to shut down the Heat in fourth quarter.

That win over Miami is still in my mind the best of the season so far. It was cool beating Boston in Boston. Beating the Spurs and Lakers at home is great. But the way the Suns used their defense to come back in this game really set the tone for the early success and sparked that 14-3 start to the season.

That November 3rd game showed how resilient, gritty and tough the Suns could be. In December, the Suns lost a lot of that edge and as Nash said, weren't tough enough. Hopefully, they will get back to that point. That win in Miami set the bar.

Tough wins over the Kings and Rockets were a good start. Another win tonight against a team that is both beatable and capable of beating us will be a great continuation of that trend.

The other guy I am most interested in watching is Michael Beasley. I remember talking to Beasley at the All Star game last year during the Rookie/Sophmore media availability. You can listen to that here.

Beasley was sprawled in a chair with his feet out and his head back. He was literally as laid back as he possibly could have made himself while sitting on a chair (he was the ONLY player not standing btw). And while I won't go so far as to say he was stoned at the time, we now know that he's had his issues in that department.

This season though, I keep hearing about how well he's playing and how he's seemed to have turned it around.

15 points and 7 rebounds in 32 minutes is solid but I am not sure if that's anywhere close to his potential. I don't watch the Heat nearly enough to comment but my comment is that on that team where he clearly has the opportunity to be the number 2 guy, he could be doing more. If he can do more.

Of added interest to Suns fans (as was addressed in my question to him last year ironically enough) is the potential that he could be traded to Phoenix in an Amare Stoudemire deal.

I know nothing and haven't even heard anything, but of all the possible destinations for Amare, Miami always made a lot of sense to me. Assuming they can keep Wade (and getting Amare would have to help in that regard) you could easily see Amare agreeing to extend there.

Any Amare to Miami deal would have to include Beasley coming back. Right?

A dream deal for me would send Amare to Miami in a sign and trade and get back Beasley, Haslim and James Jones. I doubt Miami would want to give up Haslim but without his salary it is hard to make the numbers work.

Anyway, of all the potential outcomes for the Amare situation, a trade with the Heat that nets Beasley is high on my internal list of possible/favorable outcomes.

Keep that all in mind while watching Easy Beasley tonight. Or don't.

And how could I forget that Rafer Alston is now with the Heat!

Wade: Alston\'s the One for Me - Bethlehem Shoals - The Baseline - Sporting News
Dwyane Wade is really good, even when he's not making us all run for the hills like last season. However, one of the few drawbacks of having him on your team—or Brandon Roy, for that matter—is that it really requires that the thinking cap remain in usage on the part of coaches and front offices. These are off-guards that dominate the ball, begging the question of what exactly the PG is supposed to do. Steve Blake cannot save you forever, sorry. Chalmers is young and incomplete, which is not a fair answer.

I think more interesting point here is that Mario Chalmers had already been benched in favor of Carlos Arroyo and now they are bringing in Alston.

Everyone (maybe even you) was really high on Chalmers last season which just goes to prove my point about rookies - either good or bad, you can't judge them too soon. Omri Casspi for example, looks great right now but how will he be looking this time next year? Too soon to say.

Game and Other Links:

and for all those that love to live in the past and revel in past glory (which for Suns fans is both pain and pleasure) I give you Q Rich talking about how special the 04/05 team was. Let the What if game begin continue