Ladies and gentlemen, boys and girls, this is PanamaSun reporting back for blogger duties here at Bright side of the Sun.

I'd like to apologize for not posting much in a while. I've been really busy working and getting in shape to play at a very important corporate league. But the regular season is right around the corner and here at - your favorite Suns' blog- we eat our vegetables and take our traditions very seriously. Like every year we do our Season Preview Series to get you pumped up (or depressed) for the new season and as always... some things never change:

2) The media reporting that Suns championship window is completely shut, they will never make the playoffs, Steve Nash better retires and becomes an actor - check

3) Suns pre-season sucking so much we want to puke, almost validating media reports mentioned above - check

4) Mike Lisboa making his yearly come back after claiming he was done blogging - check (we are like heroin, Mike, you can't quit on us that easily)

So, Suns basketball is here! Buckle up and let's take a look at our Point Guards and Wing players. With Amar'e in the big apple, these are the Suns players that will make you jump from your seat.

More after the jump. 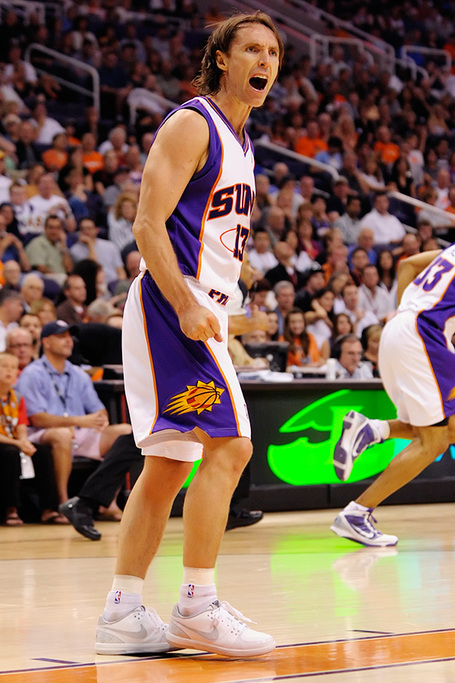 What more is left to say about this man. He's the Suns' engine. The face of the franchise. Nash will be one year older but is there any legitimate reason to be concerned? The guy seems to have found the fountain of youth in Phoenix and he's not showing signs of slowing down.

Sometimes it's hard for us to realize how difficult is to play at a high tempo, every night. Nash makes it look easy. Split second decisions, behind the back passes, impossible bounce passes, three point shots in transition, awkward lay ups and leadership that irradiates from his pores. We have become so used to his great play that we take him for granted.

In his 14th season, Nash played even better than in his two MVP years.  He led the league with 11 assists per game, having the best statistical season for a PG over 35 years old. He once gain shot over 50% from the floor, 40% from behind the arc and over 90% from the line.

Now Steve faces another challenge this season. He will have new team mates to incorporate and even maybe play off the ball from time to time. We often talk about how Nash makes everyone better, but sometimes we overlook how hard is to incorporate these new pieces and adjust your game so they can excel in theirs.

As a PG your job is to understand your team mates' strengths and weaknesses so you can give them the ball in a position where they can succeed. It takes time and intelligence to master this art and we know Nash is smart but does he have enough time to make this team a threat in the West this year? He's certainly done it before but it's no easy task.

It's hard for me to imagine someone else as the starting PG for the Suns. It constantly happens with franchise players. As fans we become so spoiled and used to them that we don't realize that they will age. As a Yankee fan (please don't hate me for this) I've asked myself if this will be the year when Mariano Rivera stops closing games or that his cutter will stop breaking bats and making hitters look stupid. That day has not come yet and it seems very far away so I just sit back and enjoy. I plan on doing the same with Nash. 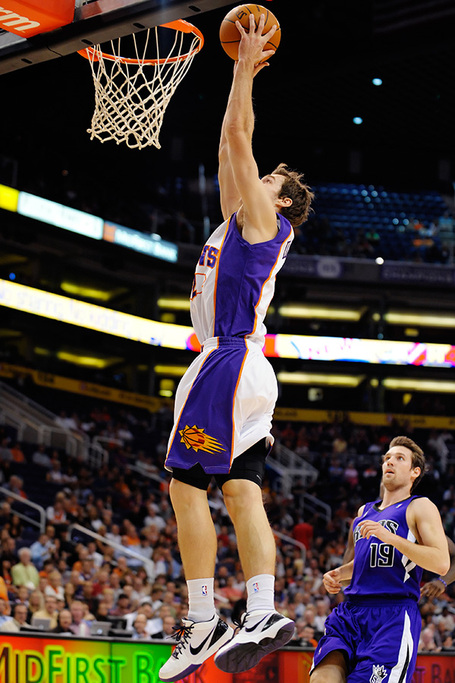 I've never felt like this for an NBA player. It's hard to describe. It's almost like when you go and root for your kid at a soccer game. You want him to do well, you want him to score but even if he doesn't he still makes you proud. If he has a bad game I always try to find a bright spot.

Goran made a name for himself last season. He stopped being the scared back up PG and actually became a legitimate threat against any team. Opposing coaches were forced to pay attention to him and, just like Nash; the best defenders were assigned to guard him.

He has learned to pass the ball in traffic. He's a good defender and his long arms seem to bother other team's ball handlers. He can shoot the three and drive to the basket. He can push the ball and play at a frenetic pace. We no longer have to worry when Nash goes to the bench; in fact, there were times that we wanted Dragic to stay on the floor. Please take a second to read that last sentence again.

It's amazing what confidence does in any professional sport but specifically basketball. Once the nerves are gone you can just play freely and enjoy the game. This is what happened to Dragic last season. Alvin Gentry made it clear that he didn't care how many mistakes Goran made, he was still going to get the ball and he still needed to be aggressive.

Goran is a fun player to watch. He won a lot of fans last season but he can no longer be the "surprise" in games. Coaches are aware of his ability to drive and kick, shoot the three and play off the ball. He will have to be ready for the challenge and I will certainly be there rooting for him. 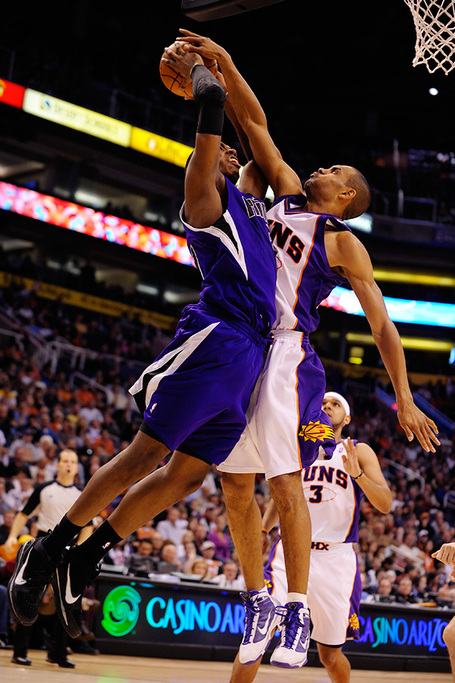 Grant is like the feel good story of the NBA. You all know about his injuries, all the years he lost and how he was considered to be the next coming of Michael Jordan. Ever since he got to the valley he has given everything he's got on the court. He's one of the leaders of the team and everyone looks up to him.

Many of us have wondered if it's time for him to come off the bench and give a guy like Dudley a chance to start. That's not going to happen if Grant is able to continue to run the floor, get rebounds and guard the other team's best scorer.

I've heard comments like "You know the Suns suck defending when their best defender is a 38 year old guy" "You got Hill covering Kobe?" Obviously, these are people that have not watched the Suns play.

It'll be interesting to see if at 38 years old he can continue to contribute. He did have problems with back to back games so I expect that carry over to this season.

If he shows signs of slowing down, do you think Gentry will give a chance to a guy like Dudley to start? We'll have to wait and see.

There's always a guy that seems to do everything on a team. This guy does the dirty work, rebounds the ball, gets some steals, makes big shots and hustles up and down the court. The ball seems to find him and he takes advantage of that. I'm hoping Childress becomes that type of player for the Suns.

Childress can play several positions, he's versatile player who's also a good defender. He has averaged double digits in scoring on all of his 4 seasons in the NBA. You can expect that to continue this year with Nash at the point.

During the 2009-10 campaign, Childress averaged a team-leading 15.8 points and 5.4 rebounds in Greek League action and 15.2 points and 4.8 rebounds in Euroleague play. During his four seasons in the NBA, the former Second Team All-Rookie selection averaged 11.1 points, 5.6 rebounds, 1.8 assists and one steal a game.

Amar'e had the goggles but Josh is bringing the Fro back. I'm looking forward to watching him play. 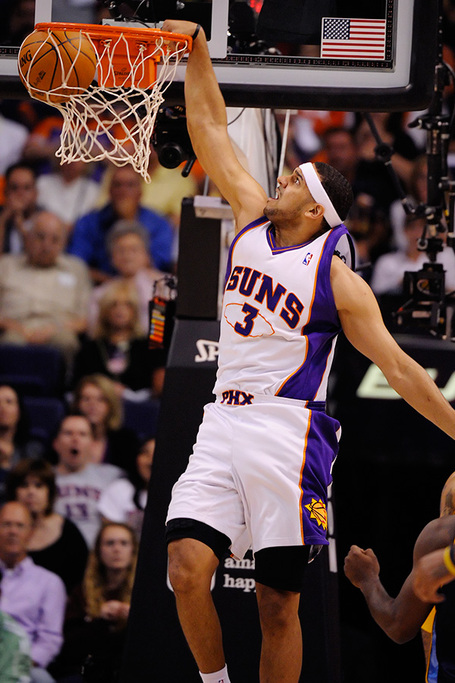 This guy makes me feel like anyone can play in the NBA and I mean it in a good way. The NBA equivalent of the girl next door, Jared Dudley is a walking cliché. Work hard, exploit your strengths and you will succeed.

In one of the most underrated moves in the history of the NBA. Jared Dudley came from the Bobcats and most of thought he was just an additional piece thrown in to complete the Richardson deal. Most of us were wrong.

There's no doubt that Dudley is talented. He worked hard on his three point shot last offseason and it really paid off. The recipient of the 2009-10 Majerle Hustle Award averaged a career-high 8.2 points, 1.4 assists, 24.3 minutes and 45.2 percent shooting behind the arc. He can be an annoying defender, Vujacic-like, he can get under other players skin really quickly.

I'm predicting that Dudley will get more minutes this year. Gentry will do his best to give Grant a lot of rest to keep him fresh for the long season so Dudley will have to step up again. He has proven that he can handle the pressure and came up big last season in several key spots in the playoffs.

Dudley worked hard this offseason and showed up 15 pounds lighter. This will help him when guarding quicker guards. It shows his commitment to get better to help the team. Now that Amar'e is gone, everyone will have to take their game to the next level.

I expect him to have a strong season.

I left the X-factor for last because I feel he's the key to the Suns success this season. With Amar'e gone he will be the number one option on the offensive end. This is a role that he's used to play. Richardson's impact will be a hot topic this year as it was last year since the Suns are 40-9 all time when J-Rich scores more than 20 points.

My only concern with J-Rich is his shot selection. With Stat gone, I'm sure he knows he will need to carry the scoring load. I saw him take some bad shots last season, rush them or force them which is concerning if he's going to be our number one option. Gentry's plan has always been clear. He loves to get Richardson involved early looking for him in the post but I think he really gets on a roll when his first couple of baskets are in transition.

As I said, with Amar'e gone, everyone will need to get better and step up their game. Regardless of what happens I'm sure we are up for a fun ride. We know for a fact that all of the players will work hard and I'm sure they will surprise a lot of people in the West.

Stay tune for the next chapter of our Season Preview Series when watdogg10 takes on the Suns Bigs. Literally.