Sure, we're only 3 games into the season. Sure, the sample size is WAY too small to identify any predictable trends.

But we don't have another game till Wednesday night, so we gotta talk about SOMETHING right? And what better to talk about than the Phoenix Suns? Don't worry, I'll answer the question for you right now: nothing.

October is in the books. Happy Halloween!

How did the Suns fare in their first regular season games this month? Well, not so good. Hit the jump.

Let's look at some early data, courtesy of basketball-reference. 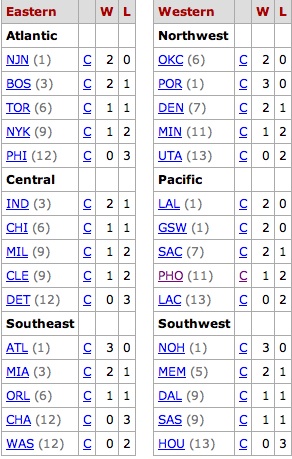 The Suns are 1-2 overall, in 4th place in the Pacific Division and 11th in the Western Conference. If the playoffs began today, the prognosticators would have been right. Starting looking at lottery picks, folks!

Now let's see how the team is doing.

Okay, this is a little more difficult to read. Go to basketball-reference.com to figure out what each factor means, but suffice it to say that you want the rankings in parentheses to be as high as possible. The Suns' rankings are not.

(in the immortal words of 'what she said': click on it to make it bigger)

Apparently, Steve Nash can't pass anymore without turning the ball over just as many times. Hakim Warrick is kicking butt in limited time, as is Goran Dragic, while Nash, Hill and Turkoglu are wasting their minutes by comparison. Oh and Dudley seems to have regressed as well. And Childress was a terrible offseason acquisition.

This team is doomed. DOOoooOOOMMMMMMMMed.

Are you scared yet?