So tonight the Suns are back in action after a 3 day vacation facing the Sacramento Kings here at home! Both teams are coming off of tough losses to teams that you almost don't want to admit you lost to... but ya'll know that this is the NBA, where "Unpredictable" happens - just ask Chad Ford... or anyone at the mothership or any other national media outlet who predict and prognosticate to no avail year after year.

The Suns turned the ball over abundantly and showed sloppy offense in their loss to the Memphis Grizzlies and the Kings did the same in their 'L' to the T'Wolves.

Anyways, I know we're talking about the 3-4 Sacramento Kings... but believe it or not we are the 3-4 Phoenix Suns and this game tonight means more than you would think.

Not only is this going to be a gritty match between two struggling teams trying to find cohesion and wash bad-loss tastes out of their mouths, but there is a little more riding on this game tonight - find out what the heck I'm talking about and more after the jump!

This game is so important because starting Sunday, the Suns will play 4 games in 5 days - 2 sets of back-to-backs - against 4 of the leagues best teams, The Lakers, the Nuggets, the Heat and the Magic. It is going to be brutal week, and the tough schedule continues for the Suns. This is why tonight's game is soo important.

"A poor showing and a loss tonight will put the Suns at 3-5 heading into a potential 4 game disaster, but a good showing and a win would bring the Suns back to .500 and make whatever happens over the next 'death-week' not seem so bad."

It could be the difference between having a 5-7 record or a 3-9 record by the 19th... but then again, monkeys could fly out of my butt too. The truth is, it's really not that big of a deal because the season is so young and our schedule has been so tough. But I needed to grab your attention somehow right?! Now let's continue with the usual notes, predictions and beautifully inane yet pertinent random junk from yours truly.

Rebounding - It has become standard that we address rebounding as an issue for each game... and tonight is no different especially with wide bodies like Landry, Dalembert, and Jason Thompson coming off the bench - the Suns will again struggle to clean the glass and prevent 2nd chance points for the Kings.

Stop Evans - with fouls, crowbars, fast cars... or we can just try Grant HIll, Jared Dudley or Josh Childress. The kid is a minotaur.

Impose our will - With active hands - full court pressure and frequent fast breaks we need to impose our style of play and take the Kings out of their element. This is what has hindered the Kings so far this season and Paul Westphal mentioned this a little after their loss on Wednesday,

"We've got big guys dribbling when they should be passing and letting little guys dribble up the floor," Westphal said. "We've got people going one-on-one into a crowd rather than seeing the defense and passing … We're just not playing together and playing to our strengths the way I see us doing in practice or the way we did in the first few games."

Here's a little more testimony as to the Kings woes from Jason Jones of the Sacramento Bee on his Twitter. 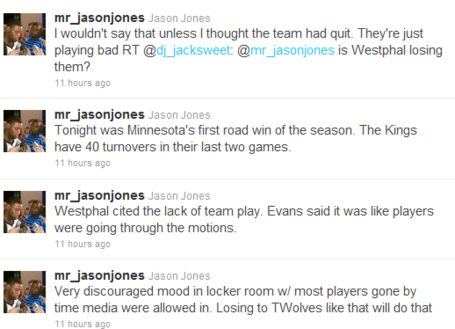 They're pretty much struggling with the same type of problems our Phoenix Suns team is facing, so again Captian Obvious reminds us all that the win will no doubt go to the team that executes better! Ha! Imagine that.

It does help that the Suns haven't lost a divisional home game to a team other than the Lakers since 2006-07 when they lost to the Clippers on April 17, 2007. It also helps that the Suns swept the Kings last year (4-0) and has won 9 straight home games against Sacramento. The numbers are on our side.

One of a few clear advantages the Suns do have in this match-up is our improved bench. Goran Dragic is playing out of his mind to start the season (Please see this again... and again, and again...), J-Chill is finding his niche, and Warrick is turning into the finisher the Suns need him to be.

In fact - the Suns bench is playing so well that it's actually out-shooting the Starters. The Bench so far this season is shooting 47.4 percent form the field while the starters are shooting 47.2! Another crazy fact is that with Warrick (12.3) and Dragic (9.4) this combo is nearly the first pair of full-time Suns reserves to average double-digit scoring since 2001-02 when Rodney Rogers and Tony Delk did it.

The concern on the Bench for me is Channing Frye's shooting. I'm going to leave it at that becuase he has stepped up and played pretty good D and has been rippin' down boards at a satisfactory rate. I'm hoping he gets out of his 'slump' soon, tonight might be a good night since he always shoots better at home.

A REUNION OF ALL SORTS

Something interesting (and yes trivial) that I noticed while writing this is the fact that when the Suns face the Kings there are all kinds of reunions and connections going on - here are a few I can think of:

Okay enough of this - family reunions and high school reunions are always awkward and boring so lets move on...

A little VOCAB for you high-school Bright Siders,ABROGATE [ab-ruh-geyt] –verb (used with object), -gat·ed, -gat·ing. 1. to abolish by formal or official means; annul by an authoritative act; repeal: to abrogate a law. 2. to put aside; put an end to.

Jason Richardson has started the season right where he left off during the Playoff run last year. EN FUEGO. He has scored 15 or more points in 7 straight games to start the season and has posted a total of 152 points. These are career bests for J-Rich, bettering his 143 point 7-game start to the 2005-06 season with the Warriors and he is just 1 of 10 NBA players this year to have scored 15 or more in every game this season, joining the ranks of mind numbing scorers Kevin Durant, Monta Ellis, Pau Gasol, Rudy Gay, Jeff Green, LeBron James, Kevin Martin, Derrick Rose, and Russell Westbrook.

Out of those 7 high scoring games Rich has posted more than 20-points in 4 of them... now following the rules of the J-Rich Law found in the Codex of Laws of the Basketball Kingdom of last year, that should account for 4 victories for the Phoenix Suns right? Wrong. We're 2-2 when Rich scores 20+ this season.

A little legal lesson for those unfortunate souls who are unfamiliar with the Codex of Laws of the Basketball Kingdom 2009-10,
League: NBA
Region: Western Shire Division: Pacific District: The Honorable Phoenix Area Suns
Title 75 - Chapter 1 - Article 1.1:
§ 75-101. (A.) There is a SG named Jason Richardson (B.) The above mentioned SG will be named herein after J-Rich and plays for the Phoenix Suns (C.) When J-Rich scores 20 or more points the Suns will have an 86% chance at victory (D.) This approximation is based on the 31-5 record in 09-10 when J-Rich accomplished such feat (E.) Given such high % Layman's terms shall be - "When J-Rich scores 20, the Suns will win"


You see there's just one small problem with this law... it's outdated, a lot like the Arizona law still on the books that says you can't keep your donkey in a bathtub. Jason Richardson is now one of the top 2 scoring options on the team. No longer are his 20 points a compliment to the heavy work of Amare Stoudemire.. they are the heavy work of the team and that is why this rule shall be striked. Someone else needs to step up and add some extra 'complimentary' points (HINT HINT ROBIN LOPEZ HINT STEP UP YOUR GAME HINT HINT) for the Suns truly to be successful like last year.

Mash it up now my peeps - if there's something else you're looking for in this game let it be known in the comment section!

Paul Coro's Orange Slices Blog - Nash envisions playing beyond this contract but how much losing would he be willing to endure in Phoenix at this stage? Nash has been blunt with his frustration that the Suns were a step away from the NBA Finals last season, only to have the team made over in the summer and the reliance fall on him to make it work.

Paul Coro in the AZRepublic - Phoenix Suns center Robin Lopez starts, rarely finishes - "I think Robin still is trying to get back to his best physically," Nash said. "He's not moving the same as he did last year. He's not covering the same amount of ground. It takes time. Backs are difficult and what he had is not a joking matter.."

More Coro - Phoenix Suns' first priority - limit turnovers - "For a team that has been competitive in each game of a 3-4 start, taking a few extra shots instead of turnovers and not trying to defend a fastbreak on many of those turnovers could reverse their fortunes."

Check out Sactown Royalty - Opposing Small Forwards Feasting on Kings- "The Kings have several problems leading to these three straight losses and an awful 1-3 home record. In today's column, The Bee's Ailene Voisin blames a lethargic, confused and ineffective offense. The offense certainly hasn't been creative during the homestand. But to me, the glaring problem is still defense. Specifically, it's perimeter defense. And it's hard to ignore what opposing starting small forwards have done to the Kings."

Not to much from shootaround today. Gentry called the Kings a "good team" which is pretty much what he says about every team unless they are a "great" team.

As for the Hedo/Warrick thing, it doesn't sound like he's ready to make the change but will adjust rotations based on what happens.

"I don't know, we'll take a look at it. One of the things I talked to Hedo about is that to have him guard a Zach Randolph or something like that is a little unfair so there is a possibility. We'll see how it goes. I don't want him in foul trouble, so if I think it's a situation where he's going to get in immediate foul trouble then we'll change our rotations and it could be as early as two or three minutes in the game."