Phoenix Suns Look To Snuff Out The Houston Rockets

Share All sharing options for: Phoenix Suns Look To Snuff Out The Houston Rockets

Oh man, what do the Phoenix Suns do now?

Gentry got a little PO'd at the team on Saturday night, and for good reason. It was their third straight pitiful defensive performance after the scrappy win against the Nuggets a week ago. The Suns surrendered 55% shooting in the last 3 games, dropping them to the 29th ranked defense in the entire league.

"I didn't think we played with any kind of desperation," Gentry said. "We can't use the fact that Steve's out as an excuse. We've still got 12 guys on our team that have to play hard, and we didn't do that.

"It's a ton of things going on. When they just pass twice and lay it in the basket and we're supposed to be switching and we leave guys for wide-open 3s when they just made one, there's no excuse for that."

Before the season, I said that the Suns players just had to repeat their 09-10 Rebound Rates to get 41-42 rebounds per game. They are now only getting about 39, resulting in the worst total rebound differential in the league.

Three More Rebounds per game. Sounds overly simple, but it's true. That's all it takes to get even on the boards on a nightly basis. Three more for the Suns = three less for the opponent = even at 42 per game.

Yet, to get that percentage back to 69% is only 3 rebounds. Sure, grabbing 69% of their opponents' missed shots is still terrible as a defensive rebounding rate (last year that meant 29th in the league), but its proven passable for long playoff runs.

Who's underperforming? You might be surprised. When I started this, I expected to see Hedo, Frye and Lopez to be the ones underperforming. But really it's Dudley, Dragic, Warrick and Richardson who are the biggest offenders (compared to ther own prior seasons). 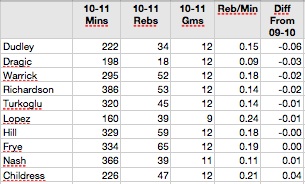 Those fancy numbers are confusing, but it basically adds up to 3 fewer rebounds per game than they should be pulling down, given rates from the prior season.

So, rebounding is NOT the end of the world for this team.

Rebounding is not this team's biggest failing. We KNEW they couldn't rebound, coming into the season. In fact, there's another horrible reality smacking this team in the face. An unexpected one, too.

Your likely first reaction to this - assuming you and I think alike - is that the shooting percentage is a natural byproduct of our front line giving up lots of interior scoring. And inside scoring nets a higher percentage of makes, resulting in higher field goal percentage by the opposition.

In fact, Suns opponents are setting new  records in shooting FROM THE OUTSIDE against the Suns. 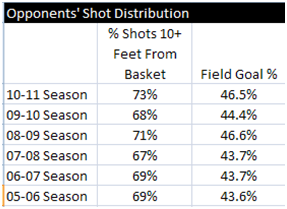 The Field Goal % in this table represents the % of made field goals on jump shots. Generally, this is the lowest-percentage shot on the floor (as opposed to layups, dunks and tips). In the Suns' best seasons, their opponents did not make (or take) nearly as many jump shots.

Surprised, considering the Suns' lack of a front line? Me too.

Surprised, considering the Suns' supposed strength was going to be perimeter defense with Grant Hill, Jared Dudley and Josh Childress running around out there? Me too.

Making this stat even scarier is the fact that the Suns are actually doing "well" defending the 3-pt line. Their opponents' shooting percentage on 3-pointers is only 35.1% (league average is 35.9%).

This means that the Suns' are getting KILLED on jumpshots inside the 3-point line. Again, I remind you that's the worst shot on the floor. It's only worth 2 points and the further you are from the basket, the harder it is to make the shot. You could commend the Suns for enticing their opponents into taking so many of these shots, but you have to also vilify them for making the shot so damn easy.

The Suns are not going to solve their rebound woes with this current rotation of players.

Yet they CAN solve this perimeter defense problem. They have the horses. They just need to give the effort and stop making stupid mistakes, resulting in wide open jumpers.

If any team is failing to live up to the hype even moreso than the Suns, it's got to be the Rockets. They've started the season 3-9. They are giving up 39.5% on 3-pointers (yay, for the Suns!). Yao and Brooks are hurting.

Yet they still boast Luis Scola and Kevin Martin, two guys who could crush the Suns with stats. And they're playing at home and are probably even more desperate for a win than the Suns. Their schedule has been tough (4th toughest, in terms of opponent winning percentage), and they've played 8 of their first 12 on the road.

The Suns will be without Nash for a third straight game. Dragic is filling in admirably, but he can't play 48 minutes effectively. When Dragic sits, the Suns rely on Dudley, Hill and Turkoglu to run the offense. That was abysmal on Saturday night. At one point early in the fourth quarter, the Suns had scored only 3 field goals in 17 possessions with Dragic on the bench. Ouch. That's NOT going to get it done.

The Suns need Jared Dudley to remember what made him a difference-maker last season. They need Jason Richardson to get out of his funk, and lead this team on the offensive end.

The Suns need Hill, Childress and Dudley to shut down the perimeter and make jump shots harder to hit.

Expect the scrappier team to win this one.

No excuses. Disappointed. Play hard. Compete and give effort. Those are things that the Phoenix Suns absolutely can't afford not to do and there's no faster way to lose a fan base than to play like that.

and Suns fans remember, it can always get worse:

Game 13 Preview: Phoenix Suns at Houston Rockets - The Dream Shake
I really don't have much to say. It took two days to get a (pre-written) game recap for crying out loud. Speaking of crying out loud, that's what I will be doing over the Thanksgiving Break if we can't win a darn game.

It's hard to keep writing about a team that doesn't win. Plus, the Texans suck. Did anybody here do anything to upset the sports gods? Because this is just straight unfair.