Share All sharing options for: Suns Defensive Sieve Both Expected And Disappointing

Normally, I would start with a recitation of the stats and other evidence supporting the notion that the Phoenix Suns are not a good defensive team, but I think we can all agree on that. The questions is why, and, more importantly, is it a fundamental flaw or a correctable situation?

There is a built-in excuse for how poorly the Suns are defending, if you choose to go there.

Robin Lopez, out with injury (again), is sorely missed on the defensive end of the floor. When he was in the game, Robin was able to defend the other team's best low post offensive player without needing help of a double team. The Suns were already behind the eight ball at the power forward position with two undersized players (Turkoglu and Warrick) before asking Frye to move into the starting lineup. Any team forced to double a mediocre NBA center like Denver's Nene is working its way out of a deep defensive hole.

The depth at the center position was something we knew about before the season started:

Phoenix Suns 2010-11 Season Preview: So Many Questions - SB Nation Arizona
As crazy as it sounds, though, the Suns are better prepared to survive the loss of Nash or Hill than Robin Lopez..

With no Robin, the Suns move Channing Frye to the starting center position, which means they have no inside presence at all.

To paraphrase Jared Dudley, the Suns need Robin Lopez both healthy and playing at a near All-Star level to get back into the hunt for a chance to play the Lakers again in the Western Conference Finals.

Beyond the lack of quality depth at center, the lack of length and beef at power forward, the Suns still have Steve Nash on the floor. It's not like any point guard in the league has been able to stay in front of Derrick Rose (just ask Rajon Rondo about that), but when the Suns have to try and hide Nash by playing him somewhere else, it can create issues like we saw in the Bulls game.

The Suns put Hill on Rose and J-Rich on Deng and Nash on Korver and all three of those guys ended up putting up big numbers. And speaking of J-Rich, he's trying and he's better than he's been but the guy just isn't a good defensive player. Josh Childress has been disappointing with his on-ball defense which leave Jared Dudley who at times does good but can't stay with quicker guys.

The bright spot, as we all know, has been Channing Frye of all people. He's done about everything you could ask of him and then some. But let's face it, when Channing Frye is your best big paint defender, you have a problem.

The Suns have to play smarter, harder and faster to make up for what they don't have. This means 100% hustle. It means super sharp rotations. And it means getting the little things right like preventing a post player from splitting a double team or spinning baseline away from the help.

These are the things the Suns haven't been doing lately and these things are both inexcusable and correctable. Here's an example:

1) The Clippers run a very simple little play designed to free up Cook for a shot. They run Gomes off a Cook screen and across the lane. Childress fights through the Cook screen and Barron bumps Gomes to slow him down. At this point either Barron needs to stick with Cook and float out or they need to switch so Barron takes Gomes and Childress takes Cook. 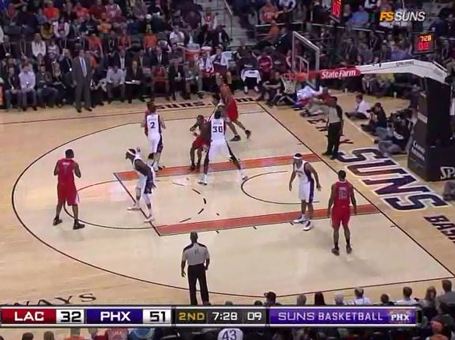 2) The Suns do neither and both Josh and Earl B. end up on Gomes. The Clippers point guard sets a screen on Dragic which prevents him from following Cook either. But really the issue is Childress and Barron both defending the same man, Gomes. 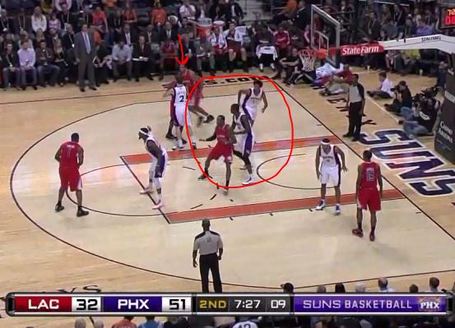 3) Cook gets space to catch, set and shoot. Dragic does his best to release from his man and contest the shot but he's got no real chance given the amount of space he has to cover and Cook's high release point. 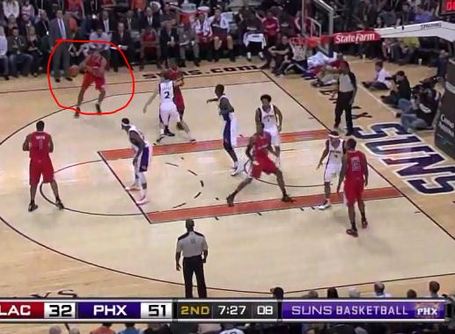 There's countless examples of these types of blown plays. You can understand a bit if Barron and Josh aren't on the same page, this is probably the first time they've played together, but it's not like this is the exception.

Another, simpler example is Warrick not pressuring Cook out past the three point line. This is just an example of passive defense instead of the kind of disruptive, aggressive play Gentry said he wants this season.

This isn't Kevin Durant or even Dirk Nowitzki who are threats to put the ball on the deck and drive by if you pressure too hard. This is Brian Cook. You want him to try and put the ball on the floor so why not pressure him a bit more even if he's two feet behind the line? 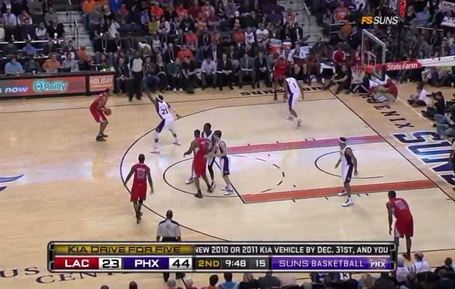 I asked Gentry on Saturday before the team flew to Denver about these type of blown plays.

"Well, we haven't done a good job with that. We have to be more consistent with that, understanding the game plan and then sticking to it and not making it up as we go along...I don't think it's losing focus. It's a communication thing. We've just got to communicate better with each other on the court," he said.

What's most frustrating is that the Suns were doing these things better to start the season. The rotations were better and the aggressiveness was there. Now they are playing tentative and lacking the two basic principles of good defense: trust and communication.

As long as Robin Lopez is out and/or not able to play with the same speed and explosiveness that he had last year due to the back injury / weakened right leg, the Suns are going to have issues inside. We can play the what-if-we-trade-so-and-so-for-such-and-such game until the cows come home, but as most coaches like to point out, you do the best with what you have and leave the rest up to the front office.

The Suns finally have a couple days off and will certainly get in some good practice time on Tuesday and Wednesday before going to Oakland to face the Warriors on Thursday. They are taking Monday off to get some rest after the 10 games in 17 days stretch and I am sure will be spending a lot of time working on fixing what's fixable and not much time (hopefully) sulking about what they don't have -- leave that up to the internets, that's what we're here for.

As I've said time and again, one thing you can be proud of with this Suns team is they don't run from their problems. They don't make excuses and more than anything, that gives me some hope that they will be able to improve their defense and get back on the same page. If you need proof of that, just read the quotes from after the Denver game.