It's been five days since the Suns took the court for real. Tonight they resume their quest of facing 40+-win teams in 15 of their first 16 games to start the season. Ouch.

The Phoenix Suns host the San Antonio Spurs for the first time since outrebounding them in Game 2 of the playoffs' second round last May. Dudley had 11 points and 6 rebounds off the bench, including a big 3 to put the Suns up for good early in the 4th. Good thing the Suns signed that man to an extension!

"Jared Dudley changed the whole game," lamented Spurs coach Gregg Popovich. "He was a monster. That was huge..."

But that was then, and this is now.

We all know how the Suns have changed, but this is not the same Spurs team the Suns faced 5 months ago either. This time, the Spurs are relying heavily on DeJuan Blair at C and three rookies: C Tiago Splitter, G James Anderson and G Gary Neal to supplement their aging Big 3.

"For so many years, we had vets," point guard Tony Parker said. "It’s time for us to rebuild. We’ve got some great young guys. We have to throw them into the fire."

In the past, coach Gregg Popovich would seldom trust a rookie with his dry cleaning, much less the intricacies of the Spurs’ pick-and-roll defense. Now he has three in the rotation.

To find a Spurs team as dependent upon first-year players as this one, you have to go back to the 1990-91 club that got semi-regular minutes from the not-so-big three of Sean Higgins, Tony Massenburg and Dwayne Schintzius.

When the Spurs return to Phoenix tonight for the fourth game of a new season, they do so with three prominent rookies in tow, all poised for a rowdy induction into the bloody rivalry with the Suns.

A bloody rivalry? Bloody for sure - and always at the expense of Nash's cranium.

But a rivalry? Coming from San Antonio faithful, this is new. Before last season, the Suns were a minor irritant. Then Goran Dragic arrived in conjunction with Father Time smacking Timmy, Manu and Tony upside the head.

Goran scored 18 in an early season win over the Spurs. Then he led a fourth-quarter rally with the second unit over the Spurs starters in an important late-season game. And finally, there was the playoffs. 26 points in the final 15 minutes of Game 3, in San Antonio. Goran's shining moment. Timmy, Manu and Tony's worst moment (not to mention DeJuan Blair, who might still be having nightmares as well).

But I digress. Back to the Spurs' rookies.

In their last game, 26-yr old Gary Neal poured in 16 points off the bench, while Splitter saw his first action of the season with a 10-minute stint on the front line.

Of course, the more things change, the more they stay the same. The Spurs leaders in minutes, points, rebounds, steals, blocks and every other major category are the same as they've always been: Tim Duncan, Tony Parker and Manu Ginobili. 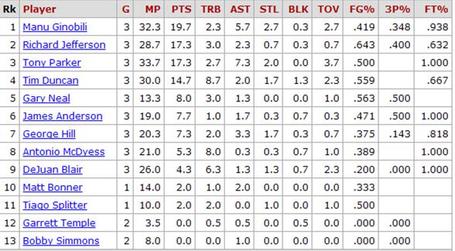 Robin Lopez vs Timmy: Lopez is a good defender under the basket, but a poor one (so far) when he has to guard more than 10 feet from the rim. Last year, Duncan reacted by setting up much like Gasol last week, popping 10-15 foot jumpers with impunity. This actually benefits the Suns, because it pulls Duncan away from the rim, enhancing the Suns' chances for defensive rebounds on misses while also reducing Lopez' likelihood of picking up quick fouls.

Hedo vs DeJaun: An interesting matchup of opposite styles will be on display tonight. Assuming Lopez guards Duncan, that leaves perimeter-oriented Hedo Turkoglu to guard shorter, thicker DeJuan Blair. Among the coaches, who blinks first? Does Gentry succumb to the fear of Hedo breaking in half, and play Frye with Lopez a lot? Or does Popovich succumb to the fear of watching Blair get owned on the perimeter like in last year's playoffs? Hedo loves space. Blair hates it. Who wins?

Suns wings vs. Spurs wings: this mixing and matching on offense and defense will be interesting to watch. Suns won the battle of little men in last year's playoffs and have only gotten better since then. I wonder how much time Goran will get on Parker and/or Ginobili, considering Nash's bad matchup on this end and Goran's majority ownership of the Spurs in recent games. But it's time for Steve to have a breakout game. I get the feeling that tonight is that game.

To boot, the Spurs opening schedule has been lighter with a home win over Indiana and a road win over the Clippers, sandwiching a home beat-down to energized New Orleans.

The Suns, on the other hand, have lost to Portland (now 4-1 overall) and the Lakers (defending champs and 3-0 this season), with their only win a big roadie against Utah (now 1-2 overall after killing the Thunder in their third game).

What does this mean for tonight?

Nothing. You cannot judge a team's strengths or weaknesses on such a small sample size of data.

While logically you might want to say that the Suns' first three games are predictive of how the season will unfold (behind LA and Portland, ahead of Utah), it is way way too early to really know if that's the case. Portland may regress and Utah may surge, and who knows LA might crumble into the ocean too.

Will San Antonio come in with revenge in their hearts tonight? Or are they more interested in fixing their own warts?

Frankly, I'm not sure how Popovich and the Big 3 react to being underdogs since they've rarely been in underdogs before. In the old days, with SA a big favorite, Pop would diffuse a regular-season matchup against a rival by benching one or more of the Big 3 with a mysterious one-game injury. But as the underdog, coaching a team that needs as many wins as it can get?

"It's going to be a tough game," Richardson said. "They're going to come in ready. We put them out of the playoffs last year. They've still got a big 3 with Tony, Manu and Timmy. We'll have to be ready for those guys."

One thing I do know: the Suns-Spurs is now a rivalry in the heart of the Texas. A bloody rivalry.

Will tonight's game live up to that history?

Now, it's on to Phoenix and the latest chapter in the age old story of sibling rivalry.  Big brother constantly beats up on little brother, over and over and over again, and little brother keeps getting more and more frustrated. But eventually, little brother's going to find big brother's weakness, and when he does, he will show no mercy, mainly because of all that built up anger and aggression.  Such is the case with these two teams.  Little brother kicked our butts last year, no doubt about it.

The last time the Phoenix Suns saw the San Antonio Spurs they were wrapping up a four game sweep of their Texas rivals. That won't be on the mind of most of those on the court Wednesday at the US Airways Center.

That's because many of the players that will be in uniform weren't around during last year's Western Conference Semifinals.

Between the two teams, 11 of the 28 players weren't on either roster for any of the seven Suns-Spurs matchups last season.

Phoenix Suns Schedule Brings San Antonio Spurs Back For 'Revenge', 7 P.M. AZT - SB Nation Arizona
One thing that the Spurs (and the rest of us) might start seeing more of is Hedo Turkoglu increasing his touches as a ball-handler. He said that he's been working on running the pick and roll with Robin Lopez in the half court and will look to bring the ball up in transition more off rebounds.