Monday was a day of rest for the Phoenix Suns. Tuesday was a day of practice. Enough practice that even Allen Iverson somewhere in Turkey is complaining about it. The guys showed about early for an extended film session which prompted this quote from the venerable Grant Hill.

"We had a good look at the film and film doesn't lie."

What he's talking about is the worst in the league defense that's a result poor communication, blown assignments, poor effort and too many offensive rebounds allowed thanks to ball watching. We've heard this story before and I am guessing we will continue to hear this story until it gets better. I still insist that it's a positive sign that we are hearing this story instead of some cover-up that has to be revealed via Wiki-leaks.

Players today were all asked (by Bob Young) if the defensive issues were effort or X's and O's. Everyone agreed it was a little bit of everything with Steve Nash winning the award for language parsing.

"It's a bit of both. I think any time you're not where you are supposed to be there's a break down in effort. Concentration is effort and focus so I think we've got work to do at both," Nash said.

The point is, the Suns are very much aware of how bad they've been defensively. Gentry even had a print out comparing last year's defensive numbers such as opponent FG% and defensive rebounding to this year. He let his team know that last place isn't going to cut it and didn't sugar coat it with talk about how good the offense is. He's not that interested in that.

"As good as we are offensively, if we can't secure the basketball and we can't guard better than we're guarding (now) we're going to struggle," Gentry said.

Scoring 133 points and 44 in the fourth quarter didn't matter. What mattered was giving up seven offensive rebounds to Shelden Williams in the third quarter and proof that when the team played better defense for what was described as an eight minute stretch, that they were able to get back in the game. With defense.

Here's shocker for you, speaking of defense. According to Synergy, the best individual defender on the Suns team this season in isolation situations with a rating that's "Excellent" and who is only giving up .60 points per isolation possession is....wait for it....OK, you can guess now but the answer is after the jump ...

According to Synergy, in 20 defensive possessions tracked (which is 6th most on the team, high being Grant Hill with 30), Nash's opponent has only shot 38.5% from the field and has a turnover rate of 25%!

I didn't totally believe these numbers so I clicked the "20" hyper-link and watched all 25 clips they showed me. That's right, it said 20 possessions but showed me 25 clips. I have no idea what that means. Anyway, Nash does do a decent job staying in front of his man but of course his man was mostly guys like Mike Conley and Mike Bibby and not Derrick Rose who gets covered by Grant Hill.

So, you know. Lets just call this a fun anomaly for now and move on to what folks had to saw after today's long practice session.

Grant said he didn't feel so good and he certainly didn't look well at all. Head cold, flu, whatever. He practiced of course, because he's Grant Hill.

Listen for yourself, he even sounds sick. Audio: Grant Hill practice 113010

Gani Lawal Impresses In D-League But Inconsistency Still An Issue - SB Nation Arizona
Gani Lawal is already halfway through his ten-game trip to Iowa, and the results have been erratic, to say the least. His back-to-back set against Tulsa over the weekend could not possibly have had two more contrasting outcomes.

Don't forget the Suns Tweetup on Dec 10. It will be very cool

Join me, @JaredDudley619, at the 3rd Annual @PhoenixSunsTweetup on Friday, December 10! With this special offer, you'll get:

Example of ball watching and getting out-worked for a rebound by J.R. Smith of all people.
1) The shot goes up from the far corner. All Five Suns are in good rebounding position around the rim. Well, four Suns. Hedo is side-by-side with Nene but that's not the issue. Take note of the Nuggets player way up at the top of the arc. Note where he appears to be headed. 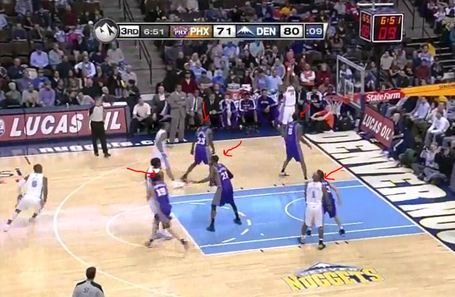 2) Here the ball has bounced off the rim and is about to come down. Three Suns are staring up at it. Warrick seems poised to leap. Nene (and Hedo) have retreated to the other end. But there's J.R. Smith somehow getting closer to the ball. 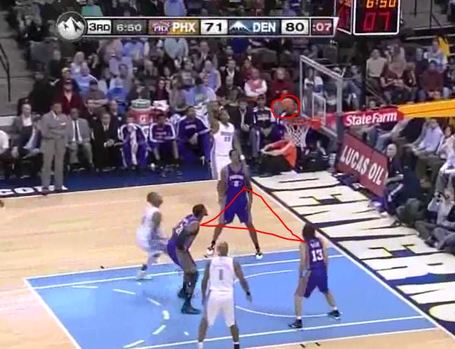 3) And of course you already know that Smith leaped past Warrick to get the put back and foul. Now granted, it was a great hustle play by Smith (weird) but the Suns can't exactly blame being small for this extra 3 points. If a Suns player would have noted Smith flying in, it would have been easy enough to box him out. But when everyone is staring up at the ball, this is what happens. 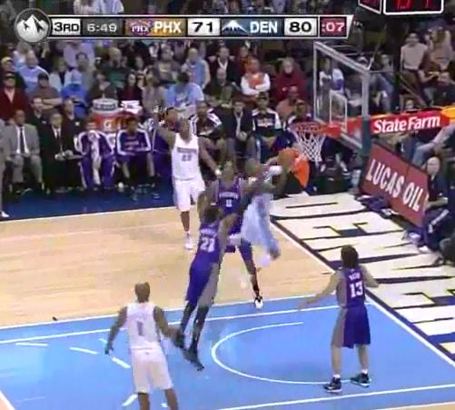