Basically, it's the back end of a home-and-home set against the Grizzlies tonight (with a little Hawk sandwich in the middle). On top of that, it's a back end of back-to-back on the road. A double whammy.

Traditionally, it is very difficult for any team to sweep a home-and-home series, no matter any difference in talent. Almost always, the loser of game 1 comes back with a vengeance in game 2, and conversely the winner of game 1 has a bit less to play for.

The Suns barely squeaked out game 1 in thrilling fashion. Will game 2 go to the Grizzlies as a revenge of sorts? Or will the Suns have a mental edge on the Grizzlies still lingering from the first game?

The Grizz SHOULD have won game 1. The Suns SHOULD be coming back tonight with revenge in their hearts. But then Jason Richardson scored 5 points in 1.1 seconds and the Suns' magic was reborn. 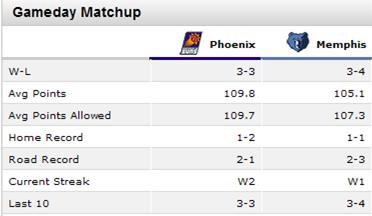 To confidently predict what happens in tonight's game is to be a Nostradamous-y.

The Suns COULD fall flat, since they just played 2 emotional, hard-fought games in a row and came out ahead in each.

The Suns COULD kick the Grizz' butts, since really Friday night was all about the Grizz at the start of the game. Can the Grizz fight back from an early hole the same way the Suns did? Do the Grizz have that much mettle?

One thing I think I can predict: the Grizz will give their second unit more minutes, at least in the first 3 quarters. They had at least 3 players go big, big minutes the other night and were visibly winded by the second overtime. Just in case it happens again, expect Hollins to make sure they get more rest earlier in the game.

Here's the lineups and stats leaders 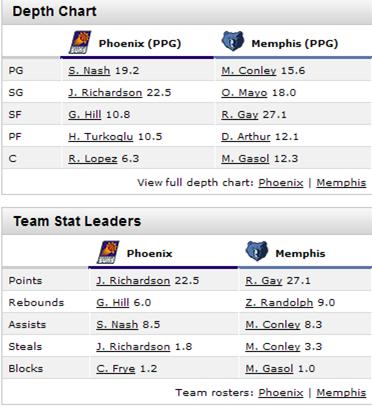 One thing I would LIKE to see: How 'about keeping the opposing team's starting center to less than 90% shooting accuracy? Hmmm? What say you, Frye and Lopez?

Other previews and game day discussions:

Outside of one 18-point, 14-rebound burst against the Lakers, Robin Lopez has been largely invisible thus far in this young season. When you're seven feet tall, it's pretty damn difficult to stay invisible for long and it's time for Lopez to make his presence known. Seriously.

Who can forget that thrilling double-overtime classic between the Phoenix Suns and Memphis Grizzlies played way back three days ago? Chances are Rudy Gay is going to remember how his team blew a four-point lead in the span of 1.1 seconds, thanks in large part to his missed free throw, which he followed with a made free throw that he tried to miss in order to run out the clock. Those are the kinds of mistakes young teams make while they are in transition from talented up-and-comer to a winning franchise.