Share All sharing options for: Memphis Grizzlies Can Sleep Tonight, Down Phoenix Suns 109-99

The Memphis Grizzlies are a talented group of guys. Of course, so is every NBA team.

And guess what else? The Grizzlies are a real bad matchup for the Suns. With two high-rate rebounders on the front line, the Grizz never fielded a lineup without one or the other (and for most of the game, both together). That's a bad deal for the Suns.

Sure the Suns only lost the rebound battle by 4, and they pulled down what I expected (41 total). But 13 of those were offensive rebounds on their own misses. On Grizzlies misses, the Suns only grabbed 28 of a possible 44 (63.6%). Randolph and Gasol, in particular, punished the Suns shortness over and over. Randolph had 23 points and 20 rebounds (8 offensive). Gasol had 10 and 8 (4 offensive). 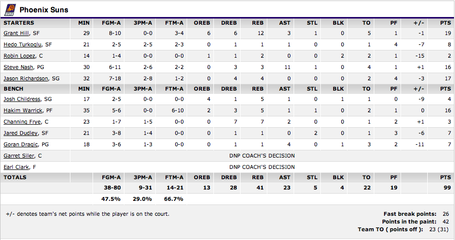 Robin Lopez, the Suns' only real 7-foot C, was once again a net negative (2 pts, 2 rebs, 2 blocks, -15 +/- overall). He muffed several offensive opportunities and never was able to fight his way onto the court. Lopez has played more than 20 minutes in a game only twice this season in 8 tries. He just doesn't seem to know what he's doing any more. Too much pressure? Who knows.

So while Lopez has not earned more minutes, his draft-mate Goran Dragic HAS (7 pts, 4 assists). How does Dragic not exceed 18 minutes again?

Well, I'll give you the answer. it's really the rotation. With Josh Childress, Jason Richardson and Jared Dudley all bigger and playing well in their own right, there's just no shooting guard time to be had. So the only minutes available are at PG. And there's no way you bench the two-time MVP, especially when he's back to his usual shot-making, assist-maven status (Nash was +1 for the game, while Dragic was -11).

Frankly, given the circumstances, the Suns were fortunate to be in this game at all. Memphis was home for the first time in a week. They were stinging from a crazy loss to the Suns (Mayo said to Tom Leander on Suns Postgame that most of the team lost sleep after the Friday loss). They are younger. They have a bad matchup combo for the Suns' frontcourt.

And they have quick hands happy to take advantage of Phoenix's probably-tired ballhandlers (12 steals, 22 total turnovers forced, 31 points scored off those TOs). Suns played their 3rd game in 4 nights, the previous 2 being nailbiters that took everything the Suns had in will power just to eek them out.

This Suns team is exactly what we thought they were: scrappy, shooting scorers trying to make up for lack of height with active perimeter defense. This team will never stop fighting, and will win a lot of games they are not supposed to win. Sometimes the formula works, sometimes it doesn't.

Next up, the only "bad" team on the schedule in the first month: Sacramento Kings. Better than last year, but not as good as the Grizzlies (who are the worst team the Suns have faced this season).