The Phoenix Suns got off to a great start on Wednesday against the Minnesota Timerwolves. The home team raced out to a quick 14-4 lead and had held Minnesota to just 17 points through the first 9 minutes of the quarter.

But with 3:00 minutes remaining in the period and the Suns reserves on the floor, we once again saw the bench that was so good at holding leads last season (and even early this season) give up a 13 points and an 8-point lead. Here's how it happened.

The lineup for the Suns was Warrick, Turkoglu, Barron, Dragic and Richardson. For the Wolves it was Love, Brewer, Pekovic, Webster and Flynn. 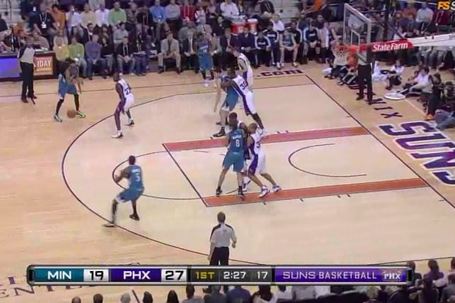 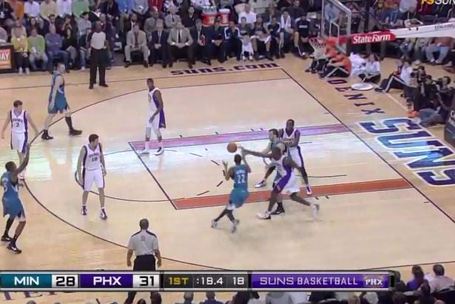 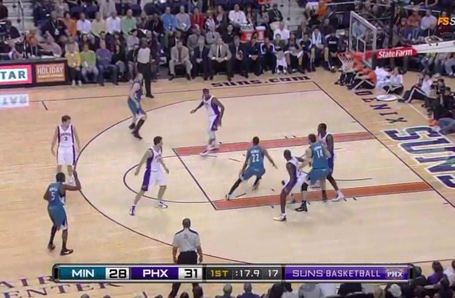 So bottom line, the Wolves got 4 easy points off turnovers and 5 easy points of bad defensive communication. They hit one tough, contested shot and a couple of free throws.

Here's two more examples from earlier in the quarter that show how the Timberwolves were able to take advantage of the Suns strong-side zone defense (for more on this defense, click here).

1) Here you see Brewer with the ball and JRich guarding him. Frye is hedged over to prevent dribble penetration. That leaves Lopez to guard both Love and Darko. He's in between both. 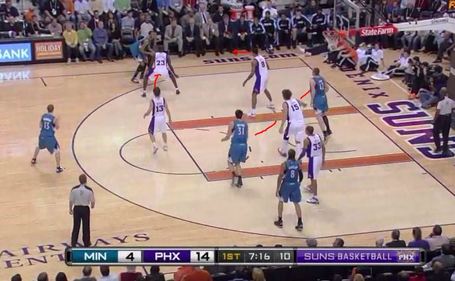 2) Darko flashes high but Robin stays with Love near the rim. The ball goes to Darko so Robin moves to close out but Darko hits Love with a nice touch pass before Hill can rotate over.

You have to credit the Wolves movement and passing here but at the same time, why do the Suns need to be in a zone to prevent dribble penetration from Brewer?

The answer is because they can't stay in front of guy on the perimeter so Gentry's been forced to use this zone which like all zone defenses has whole if the rotations aren't perfect and they weren't here. 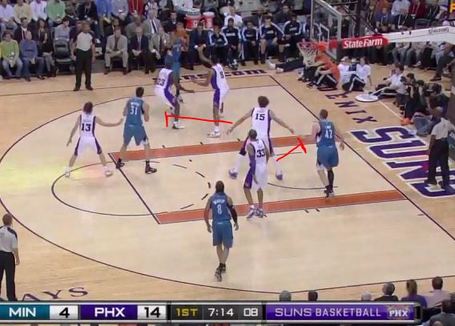 1) Here's another example where you see Warrick helping Nash contain Ridnour on the near side. 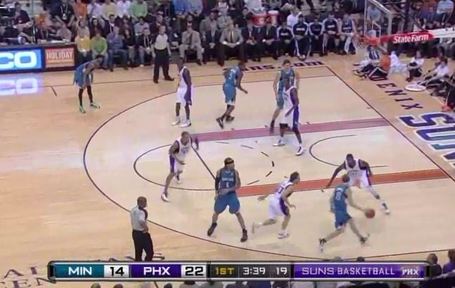 2) The Wolves space the floor very well and swing the ball quickly from the near corner to the top of the arc to the far corner where Webster is wide open. Warrick ends up having to rotate all the way across the floor which is impossible. This one is tough, because the Wolves have four shooters on the court and Hill doesn't want to leave Beasley.

Best case, Barron would have been rotated to the far corner (Webster) when the ball swung high which would have let Warrick take Darko in the post. 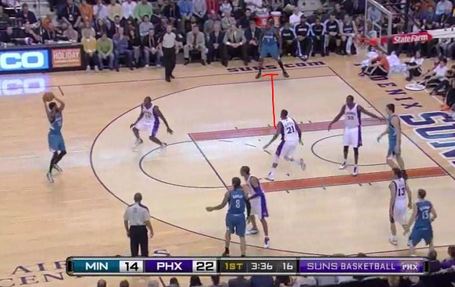 Only the very best defensive teams get these kinds of rotations right and the Suns are certainly not that. Again, credit to the Wolves for doing a very good job moving the ball from side to side and hitting open shots. But in both cases the open shots were the result of the Suns guards not being able to stay with their man without help.