We'll post more on this in a bit, but here's the full audio of the press conference introducing Vince Carter, Mickael Pietrus and Marcin Gortat.

You will note that these guys obviously know each and are comfortable around each other and they are pretty funny. Gortat made no secret about being excited to be here and having the chance to play and compete with Robin for the starting job. Pietrus looks like a boxer.

"Of course, it is competition," Gorat said about the battle with Robin Lopez for the starting center position.

"He's big, skilled. I know there's a second Lopez (Robin's brother, Brook) who's really good. Robin, he has a big opportunity right now. He's a starting big man and he's still got a lot to learn, just like me. But I'm 100 percent sure there's a bigger chance I'm going to play here than I'm going to play in Orlando."

Many see Vince Carter as a guy with a short-term contract that was part of the deal that helped undo the long-term burden the Suns took on in Hedo Turkoglu. They see Vince as a possible chip to be used in another trade or as an expiring contract to help the Suns clear salary cap space to acquire other assets.

Vince doesn't see it that way. Vince is here to help the Suns find a winning mentality and make sure the Suns believe they can win a championship. Winning is all that matters to Vince. 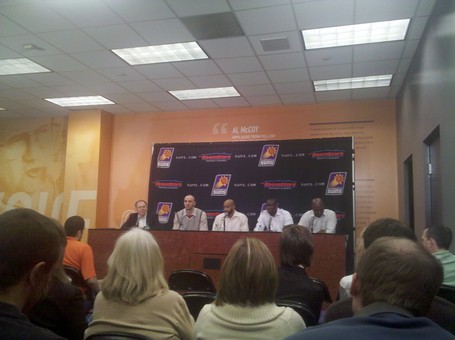