In the midst of a third quarter run that effectively killed the Wizards' hopes at a win, Eddie Johnson said, "And here I thought this was going to be a game decided in the fourth quarter." I thought the same thing, especially after a nearly-defense lacking first half that had the Suns leading 64-61. However, to start the second half, the Suns, would have none of that.

Orchestrated by the near-perfect Steve Nash, the Suns came out firing. Two lob feeds for dunks within the first two minutes of the quarter indicated that we may have been in store for a track meet. However, on the defensive end, the Suns tightened up. Players rotated defensively. They got their hands in the passing lanes. They contested every shot from the Wizards, and the defensive intensity led to a 27-13 run that allowed Nash to leave the game.

It wasn't until a stretch of sloppy play by the Suns reserves that prompted Alvin Gentry to call a time out and put the starters back in. Once that happened, it was game over. Adios. Sayonara, Washington. This was a quality win over a team the Suns should have beaten.

And there was this...

The Suns are finally looking like the team we know they could be. An unconventional, yet efficient team defensively, and a well oiled machine on the offensive end. Things aren't perfect. In fact, they're far from perfect. But improvement is improvement, and this is the first time the Suns have really taken a slumping team out back and given them an old fashioned beating.

Things That Impressed Me

Major props go out to Alvin Gentry, who has always found a way to make it work. Since inputting the widely unknown and late signee Earl Barron into the starting lineup, the Suns are 3-0. He has consistently shown that he is able to adjust on the fly and roll with the players that are succeeding. He has also shown the tenacity that it takes to coach an unlikely group of players into a successful, winning team. All in all, it was a great win for the team. These are the type of games that separate a bad team from a playoff team, and the Suns are beginning to play like they actually believe they deserve in the playoffs.
Now let us all shout in jubilee! 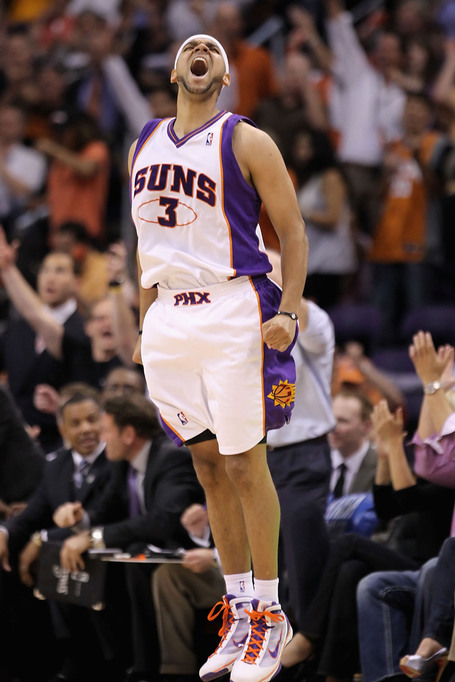 Steve Nash Leads Phoenix Suns To Schooling Of John Wall's Washington Wizards, 125-108 - SB Nation Arizona
Nash's 17 assists and perfect shooting night was only the fifth time since the 1976 NBA-ABA merger that a player has accomplished that feat. Nash has done it twice now along with John Stockton (Feb. 1994), Mark Jackson (Mar. 1987), and Magic Johnson (Nov. 1983).