Stop me if you've heard this one before. The game is close and the Suns need to execute on the defensive end. A play is run and the Suns defender fails to switch on a screen. The opposing shooter gets open and hits the big shot.

Here's one example that comes to mind. Remember all the heat Amare took for not switching on that screen and following Finley out to the three point line?

Here's another example that comes to mind for some reason at 12:40 in the a.m. Same kind of deal, opposition needs a big shot and the Phoenix defense blows the switch.

Tonight we are treated to yet another such example which isn't all that surprising. What is surprising is who blew the play. I honestly had no idea until I rewatched it after getting home from the game so I am going to keep you in suspense give a bit longer.

And just to be sure, here's Gentry's post game quote on the play:

1) You can see Rudy Gay being covered by Josh Childress about run into the Zach Randolph screen.

2) Here you can see Childress being screened by Zach's big body and note Suns number 33 who was previously with Randolph. He's left open and at this point should be switching on to Rudy Gay.

Even if there's confusion and Childress also follows Gay around the screen and they leave Zach wide open at the rim it won't matter since the Suns are up by 3 points. 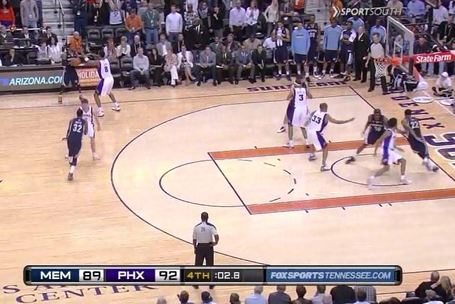 3) Here you can see Childress and now Dudley who had been screened by Gasol, trying to close out but check out how much space Gay has when he catches the pass. WAY too much. 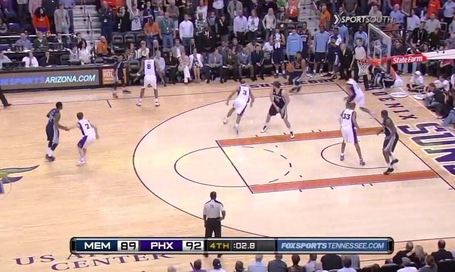 So, on this night, on this play, the Suns defensive culprit is none other than Grant Hill. Does that make you feel better or worse about the play?

I don't think anyone had seen the replay so Hill wasn't asked about the play in his post game locker room interview as far as I know. The team is off tomorrow so this will have to wait until Friday.

But on the plus side, Jared Dudley got a block on Rudy Gay:

Jared Dudley, he of limited vertical ups, blocks former dunk contest contestant and high-flyer, Rudy Gay. It's not something you are going to see often so we felt it best to memorialize in video.