Share All sharing options for: Suns Never Fail To Disappoint: 101-108 Loss to Portland

Just when you think things might be turning around, this happens and disappointment quickly returns to the Valley of the Sun.

"We got our ass kicked, plain and simple," said an extremely frustrated Coach Alvin Gentry. "We didn't do a very good job, we weren't ready to play and we didn't play with a whole lot of energy and passion. When we don't do that, we're not very good. We become a very, very average team."

I think he was being generous by calling the Suns "average".

The defense in the first half of that game was as bad as I've seen it all year. And I've watched every game of the 2nd to worst defensive team in the league, so I think that's saying something.

Sure, Portland was hitting their shots, but it is a lot easier for them to hit shots when they are getting wide open shots. Anywhere. Anytime. Open shots. Come one, come all. Get your open shots here. Free. Wide. Open. Shots.

27 of 38 for 71.1% is pretty darn good but not when you consider how many of those shots were wide open.

Think I am being too tough on the Suns "defense"? Here's what Gentry had to say about that, "We sucked. We sucked. I mean we sucked. In all phases of it. They drove it to the basket. They made jump shots. We had to end up double-teaming and they swung the ball and either made jump shots or drove it to the basket. We didn't play. They scored 66 last night. They had 60 at the half. So our defense was terrible. In the five games we won we were pretty good defensively and did a pretty good job. We didn't tonight. Thanks."

The Suns did make a comeback in the fourth quarter, cutting the lead to 7 at one point before the Blazers hit a three, Amundson traveled (one of 15 Suns' turnovers) then Blake hit a three. Boom. Run ended. Game over. Good night now.

At least Amare wasn't too upset about the whole thing. Call me Dr. Phil, but I got a weird vibe from him in the locker room. Like he was too relaxed and nonplussed by the loss which hasn't been like him at all this season. He answered the questions. Gave routine responses. But his mood was just...different to me.

We'll know soon enough if that was Amare's last home game as a Sun.

If it was, it typified his career here pretty well. He put up 24 points on 9 of 14 shooting, hit 6 of his 8 free throws, grabbed 9 rebounds, had 2 turnovers and played such porous defense on LaMarcus Aldridge that, to start the second half, Gentry moved him over the Juwan Howard and tried Robin Lopezon LMA. A move that clearly didn't impact Amare's pride at all.

Oh, and he had an amazing athletic move to dunk all over Dante Cunninghamin the first half only to see Dante return the favor on a breakaway that Amare didn't bother to really contest.

If this does turn out to be his swan song in the purple and orange, you couldn't have scripted it any better.

You know that I had to ask Amare about this possibly being his last home game, "I'm not really discussing the trades and stuff like that, but it could have been. You never know."

Not never, Amare. We will know in about 7 days.

Not to take anything from the Blazers. They played hard. They made big shots. They defended well and most important was this quote from Andre Miller, "We have done that a couple of times this year. Lose a game then come back and win, so it just shows a lot of character and a lot of fight in this team."

That must be nice. 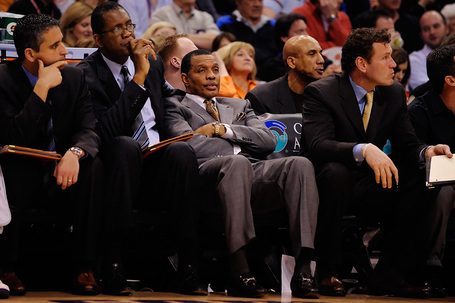