At the end of the day, it came down to the last thing Steve Kerr said in his 15-minute post-trade deadline press conference, "I wasn't willing to sacrifice this season for something that would help us in the future. That didn't make sense."

The thinking by Suns management is to maintain an entertaining product built around Steve Nash and try to remain competitive while developing young players for the future.

It's an admirable goal, but one that ignores the obvious - the Suns are no closer to a championship today than they were at the beginning of the season. In fact, by not making a move at the deadline and getting something in return for Amare, they very well might have taken a big step back.

Nash is getting older, as is Hill, and their decline is not likely to be easily replaced by the improvement of Dragic, Lopez, Dudley and, hopefully at some point, Earl Clark. Solid young players, but that group without a star isn't ever going to be good enough to compete in the NBA.

The Suns are now left with the pickle that is Amare's contract and will stand pat for the rest of the season and hope for the best. The team on the court has shown flashes of brilliance and extended periods of complete mediocrity and will now have the chance to finish what they started.

I sincerely hope that the players (and fans) appreciate that their owner didn't take a deal that would have made the team worse this year and saved perhaps $10 million in real money. The rumored swap with Cleveland for Hickson and Ilgauskas' expiring contract was never as close as reported according to Kerr, at least - not without a way to flip Z's contract for more usable (but costly) parts.

The lack of focus and mental toughness (Nash's words) through large parts of the season probably didn't warrant that kind of trust. The hard business decision would have been to pull the plug, save the money and move on with the process of rebuilding. But Robert Sarver put his foam finger in front of his accountant's thumb and once again was seduced by the thrill of victory and went "all in".

It may not prove to be a smart move, but it is a gutsy one that runs counter to his own financial self interest.

Once this run is over though, it will be time to pay the piper. While the Suns were staying firm with their mix of young role players, an aging MVP and an all-star enigma, the rest of the West is positioning itself to get better.

The Thunder and Blazers will only improve their loaded young teams. The Mavs, Nuggets and Jazz should maintain their place and the Lakers aren't going anywhere. Now add to that a Rockets team that made some interesting moves and the Kings and Clippers who have everything in place to take huge leaps forward.

Only by waiting to see what the rosters look like in October will we know if by treading water the Suns are actually drowning.

One thing the Suns haven't been willing to do, and I heartily applaud them for this, is make the mistake of committing too much for too long to Amare Stoudemire.

Between the new CBA which will radical reshape how NBA business is conducted and the man's micro-fractured knee, it would be a potential disaster to sign him to a deal beyond three or, at most, four years. To guarantee Amare, an amazingly dynamic and but ultimately incomplete player, more than $45 or $50 million dollars is setting yourself up for failure. Plenty of GMs have fallen into this trap and have saddled their replacements with immense burdens.

Bravo to Kerr for not mortgaging the team's future by taking the easy way out. I am sure Mark Jackson and Jon Barry would be thrilled to see Amare get a huge long-term contract right now, but they don't have to live with the consequences in three or five years.

With this outcome the Suns can now go back to the table with Amare and see if they can't talk him into a more reasonable deal. Hopefully, he and his agent saw what happened and how little teams were willing to offer for him and they take that lesson to heart. Doubt it, but you never know.

Barring that, as I argued, the best outcome now is for Amare to stay for his final year, which allows the Suns to tread their way through next season and be well positioned for the post-new CBA world of the 2011/12 season.

Making a Splash This Summer 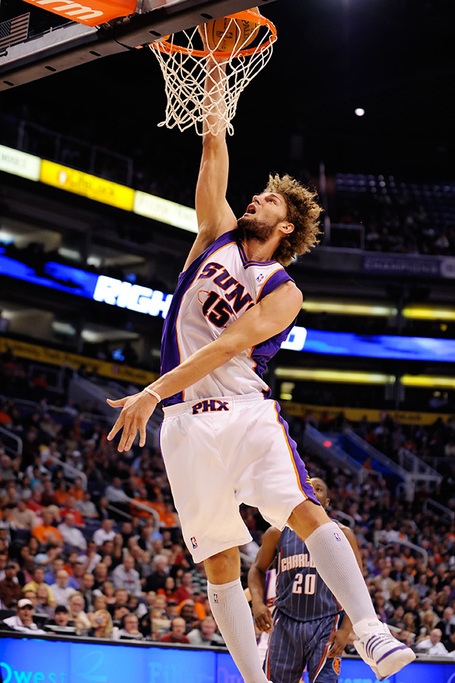 It is early yet, but there are a few things that could happen this summer that would quickly turn things around for the Suns assuming Amare does opt out and leave the Suns with nothing in return.

The most important move the team could make would be to trade Jason Richardson's expiring $14m contract to one of these teams that's under the cap and is young and needs a wing scorer. That would leave the Suns with plenty of room to maneuver.

I don't think that's likely though, which means the second option is going to be buying a draft pick using the ~$7m in cap space created when Amare walks (I still think he will).

We will surely be talking more about that and other options as the season winds down. In the meantime, how about that Nash to Robin Lopez lob play? That's looking great!