If you want to know why the Suns won this game, just play the following audio:

With Steve Nash suffering from self-described back and lower abdominal issues and what Coach Gentry loosely described as Post Olympic Torch and Cauldron Lighting Fatigue Syndrome, the Suns bench stepped to the mound and stuffed the Hawks with a defensive gem.

Let's play a little game I call, Guess the Quote:

If you guessed these were Suns quotes from December, you might be right.

They certainly sound familiar enough but no - tonight those come from 1) Mike "No Eyebrows" Woodson, 2) Josh "Dunkenstien" Smith, and 3) Joe "No Nickname Fits His Boring But Efficient Ass" Johnson.

Lets play another silly game. Guess what these numbers mean:

Answers after the jump...

You get the drift now? The Suns didn't score a lot of points but they held the Hawks to even fewer points.

That's a rare thing for the Suns except to Steve Nash, who said, "That's what you get when you play the Suns."

I think we should discount what he says, though. He's all screwed up physically right now. Pains. Aches. Torch Fatigue. Perhaps even YouTube Overexposure (which I hear can be painful - but I wouldn't know).

The quote of the post-game came from Jared Dudley. Always candid, JD said this when asked about the Suns going away from the zone defense, "I'm glad, to be honest with you. We're not a good zone team because we don't communicate well defensively. Sometimes we get lazy. That's basically what the zone is. Zone is for people that can't guard anyone. Sometimes we can switch it up and keep them off balance, but for the most part, to be successful in this league, you have to play man to man."

Here's a picture that could give you nightmares...good night now 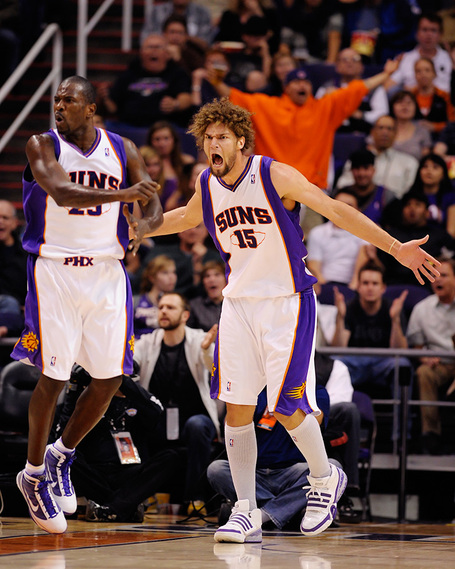