Amare Stoudemire to the Miami Heat - How Would That Look?

Share All sharing options for: Amare Stoudemire to the Miami Heat - How Would That Look?

In our continuing series of "Where in the World is Amare Going", we put on our bikinis and shades and head to South Beach to get out party on / explore what a deal with the Heat might look like.

Just a reminder, we've already looked at deals with the Nets, Warriors and Bulls.

The Heat are facing the possibility of losing Dwyane Wade to free agency this summer which has got to be their top priority. One has to assume that a key to Wade staying in Miami will be whether they can commit to surrounding him with more talent and with a guy like Wade that means a big man.

Of the free agent big men out there we have Mr. James (you might know him by his given name, LeBron), Chris Bosh, Carlos Boozer and our own Amare Stoudemire.

You might think that the pairing of LeBron and Wade would be a dream scenario for all involved but think about it for a moment. When I say, "LeBron" don't you picture him perched on his throne at the top of the key with the ball in his hands running the show? Or maybe you picture him topless in a cornfield. I picture him pounding the ball at the top of the key but hey, not that there's anything wrong with that if you go to the topless in the cornfield place.

And now think about Wade. Ball in his hands. Creating off the dribble. Getting into the lane. Pulling up for J's. Hitting cutters and spot up shooters.

How on Earth are LeBron and Wade going to coexist on the same team outside of an all-star game or Team USA?

So lets just assume that Pat Reilly is smart enough at basketball to figure out that he can't give 60% of his available payroll to two guys who both have to have the ball in their hands to be all they can be.

That takes us to Bosh, Boozer and Amare.

We already heard that the Heat like Bosh over Amare as the better defender but between Boozer and Amare I would give the edge to Sun Tzu.

If you are Miami do you wait until the summer and duke it out with about about 7 other teams who have cap space they've been promising their fans they will use on a big name or do you strike now at the only one of those guys available at the deadline. Amare Stoudemire.

I have not the answer to what the Heat will do but there's your case for them going after Amare. Sound logic but far from an obvious outcome.

Miami has plenty to offer should they decide to get Amare.

Like the Bulls, Nets and bikinis on South Beach, there are a myriad of ways the Heat could put a deal together that would meet the Suns desires for the triple crown - young talent, draft pick(s) and salary relief.

The obvious prize for Suns fans is the one asset the Heat would likely least want to part with: Michael Beasley.

He of the amazing smooth moves, silky shooting touch, nose for the ball and drug/mental rehab experience.

Since Beasley is a coveted young talent and thought of by many Suns fans as an "Amare replacement" lets take a look at their numbers side by side. Granted, Beasley is only in his second season and Amare's in his 8th but that's what replacement means. 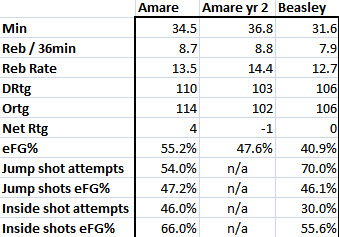 As talented as Beasley is, there's no question that a lot of his appeal is of the new car smell variety. The Heat would be much better off putting Amare next to Wade and the Suns will be getting a perimeter oriented undersized power forward who probably should learn to play the small forward at some point in his career.

To make the deal a little more palatable for the Suns, the Heat can throw in their 2010 1st round pick. They also own Toronto's 1st round pick in this draft which is lottery protected. That gives them two picks in the 15 to 20 range. Giving one up shouldn't be too painful.

To make the salary numbers work the Heat have a couple of options. The easiest is the ironic Quentin Richardson who was traded as many times this summer as a bad hooker's phone number at a Vegas convention of Proctologists (no idea either...just move along).

Q Rich and his $8.7m expiring could be combined with Beasley's $4.6m and Trade Machine says, Green is for Go.

As an added bonus the Suns would knock another $3m of this season's luxury tax.

You remember James Jones. The guy who used to play for the Suns and at one point was one of the team's better wing defenders and in Portland went on to hit some ridiculously high percentage of his three-point attempts.

JJ's still shooting over 40% from three but he's barely playing on a fairly mediocre team and - big and - he's got 3 years left on his contract at about $4.6m per year AND he's got a 15% trade kicker. But - big butt - his contract isn't guaranteed beyond $1.8m for next year meaning the Suns could waive him or use him in another trade.

Haslem is an expiring contract that can still play which is why I have a hard time imaging the Heat (who after all are a playoff team in the weak-ass Eastern Conference) would give him up.

I'd take him though. James and Haslem and Beasley would combine to help the Suns at least get to the first round which is their ceiling this season anyway.

Now things start getting unappealing. Wright is a $2.8m expiring contract / small forward. This deal is basically a salary dump that rents the Suns Haslem and nets a 1st round pick. You've got to think the Suns can do better than this.

Deal #4: Jermaine O'Neal and the Heat's 1st rd pick for Amare and Barbosa

JO is a $23m expiring contract that the Heat seem willing to move but I don't see how on God's brown desert the Suns could do this deal and frankly there's no other deals that involve JO that make sense either. At least without a third team involved and I am not even going there.

A deal with the Heat that nets Beasley, an expiring and a mid teens 1st round pick seems to me to be about the ceiling for what the Suns could hope to land for Amare.

I am not a big Beasley fan myself and would worry about his long term viability in this league. Guys that have the kind of problems he's had so early in their career almost always bust out. JR Rider. Darius Miles. Chris Anderson.

Beyond the personal problems, I see Beasley as a guy that needs to be paired with a big that can really dominate in the paint since he's a perimeter oriented 4 and while we all are loving on Robin right now, it's a little soon to call him the next Al Jefferson.

In theory, the Clark/Beasley tandem would give the Suns a nice defensive 3/4 combo but you could also end up with the most immature, laid-back duo since...(stumped for an appropriate reference). Athletically the Lopez, Beasley, Clark group is intriguing but who's going to be the head honcho of those guys - the one with the biggest hair?

All other things being equal I think I prefer Yi to Beasley.

Yi is a more efficient shooter, has similar rebounding numbers that are improving year over year as opposed to Beasley who's flat, and isn't likely to smoke his way through a paycheck and end up on America's Most Wanted.

KTAR.com - Suns Spotted Around The League
Gambo is reporting the Suns continue to have conversations with Washington regarding a possible deal involving Amare Stoudemire. Key pieces that could be possibilities to wind up in Phoenix are Caron Butler and Randy Foye. Antwan Jamison is too old for the Suns liking and was bothered by a sore left knee on Monday.The team mentioned last week and again brought up today is the Philadelphia 76ers. The 76ers could package a few of their players - Samuel Dalembert and Andre Iguodala - as they both take up a good amount of Philly's salary cap. Dalembert has $12.2M remaining on his contract.

We'll get into both of these in more detail in coming days. I am not thrilled with Butler and like most people am intrigued by Iggy and Dalembert and especially if JRich can be included..