Suns Down Kings With Another Defensive Gem: 104-88

Share All sharing options for: Suns Down Kings With Another Defensive Gem: 104-88

Who are those impostors in the Orange and Purple and what do they think they are doing playing "defense"?

After holding the Hawks to 30 points in the second half on Friday, the Suns repeated the feat tonight, limiting the Kings to 34 total points on 12 of 33 shooting. That's 36.4% for the mathematically challenged.

Add to that a 29-15 advantage on the boards, a 10 to 3 advantage in second chance points, and a 30 to 10 advantage in points in the paint and you might as well be watching the 2008 Boston Celtics.

And if you must know, it was Amare Stoudemire's 11 rebounds in the second half that led the way.

"I mean, Amare Stoudemire, he's a beast. He was coming in there, jumping over everybody, snatching rebounds and putting it back up. That's what hurt us. Good team like that we've got to do a better job getting those rebounds and leaving them to one stop like they did to us. We get that down it could have been a close game tonight," Tyreke Evans said about the Phoenix Suns rebounding prowess.

You know what else is impressive?

Despite being a game-time decision due to back and lower abdominal pain he came out and dropped 17 assists on the Kings. Don't think he's all the way back though and in fact Coach Gentry is considering leaving him home for the road trip to Oklahoma City on Tuesday.

Nash said the training staff was able to help him get some things loose before the game and he wanted to contribute but he's still struggling with the pain, "I'm not right. It's difficult to control myself, to go one way, stop and pull up. It's tender and I don't have a lot of body control so it's very hard to be accurate with my shot in that way."

Making the pain even worse for him was learning that Captain Canada's home Olympic Hockey Team was downed by the upstart Americans 5 to 3. When they announced the score during a stoppage in play, Nash made a face and did a double thumbs down and shook his head. He had previously predicted that, "the Yanks were going down."

After the game, he had this to say about the national disgrace suffered by the Canucks, "It's tough. There was a moment where I almost slapped someone in the front row because kept yelling it (the score) to me but we're worried about season ticket renewals so I held back."

Jason Richardson busting out the 26 points was nice, as was Grant Hill's amazing defense and smooth jump shots.

Grant finished with 16 points (7/11), 6 rebounds, 2 steals and three blocks. Nice game from the Suns wings as well as from Channing Frye who didn't even attempt a three pointer and still finished with 12 points.

Frye was aggressive and, as a result, led the team with 7 free throw attempts.

Gentry credited the Suns reacting better to teams switching screens. He made a point of saying that the Suns did a good job getting Frye the ball when the Kings switched a point guard on to him. In some ways, I wonder if having Nash not feeling good about his shot forced the team to take advantage of the size mismatch in the post.

Defensively, the team mostly credited improved effort and focus but something Robin Lopez mentioned stood out to me, "That's all around having faith in each other. We feel that we don't have to put people on the line. We feel that the help is there."

Good defensive teams always talk about trusting each other and so to hear Robin mention that is a good sign for a team that might just be finding a way to finally improve their defensive performance. We'll see if keeps up and becomes a trend or if this is just a blip.

Next up, Thunder on Tuesday in OKC and then back Wednesday in Phoenix against the 76ers. 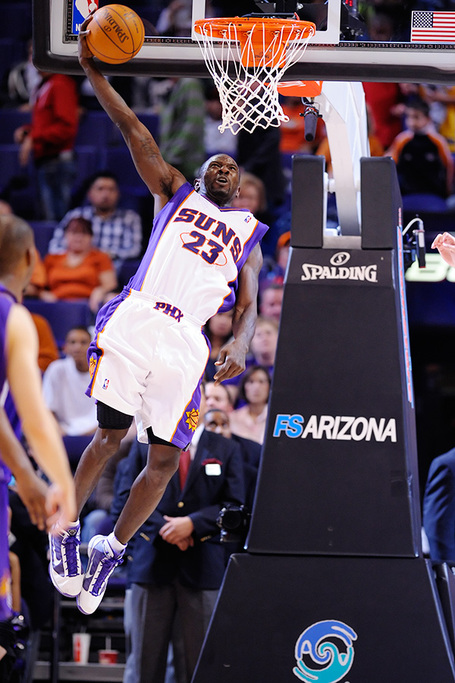