Some games are unforgettable. Tuesday night in Oklahoma for example. Tonight's game was completely and totally forgettable.

As in forgetaboutit forgettable

As in let's just pretend this never happened forgettable

As in I've already said too much about it forgettable

The good news is that the Suns won the forgettable game because otherwise we wouldn't stop talking about it. J-Wow came out on fire and hit a couple of early threes. Nash went 5 for 5 in the first quarter and dropped 14 points and 5 assists. Some other guys played too, but I can't really remember who. I forgot about them already.

The game continued on cruise control with the Suns milking around a 6 point lead for much of the half before they decided to wake up and dropped a 9-3 run to end the half up 11.

Out of the locker room they continued to step lively and quickly increased that lead to 21. That lasted a few minutes until inevitable let down came and the Sixers closed it to within about 13 at the end of the third.

The only real question, though, was if Nash would have to come back in to close it out or could the bench put this sick baby out of its misery (and my misery).  Up 15 with about 6:45 to go the Suns did just enough to keep the lead around 13 to 15 so Nash didn't have to come back in.

In their last seven games, the Suns haven't scored over 110 and they've held their opponents to under 105 in six of those games. But who cares. Let's just forget about it and move on.

Steve Nash is happy with the win of course, but he is still battling "ailments". He said that the rest really helped refresh him and that he had plenty of energy in his legs which is why he was able to overcome the bad back and the ab strain.

"I didn't feel great going into the game tonight but things went well for me and the ball went into the basket. I think a lot of that has to do with having fresh legs. But for me it was nice to get back out there, to not tweak anything, and to contribute and get some confidence and hopefully my health can get better and better from here on out."

Coach Gentry talked about the standard stuff. Good win. He was happy with the stat sheet for the most part, except for giving up 14 offensive rebounds but he even gave his team a pass on that saying that many came late in the game (3 in the 4th quarter). Alvin would have liked the Suns to have put the Sixers away but in the end he didn't need to go back to Nash in the fourth which was the main goal.

Gentry was asked why the Suns defense has gotten better over the last several weeks. "Just the coaching," he joked. "I just think the guys, they talk about it alot, they talk about how we have to get more consistent defensively."

Goran Dragic admitted that he was nervous going into yesterday's game in Oklahoma but he also said he was, "motivated to lead his team." I like how he put that.

That little dream shake move he had under the basket was something he developed in Europe and has used once before this season against the Warriors. 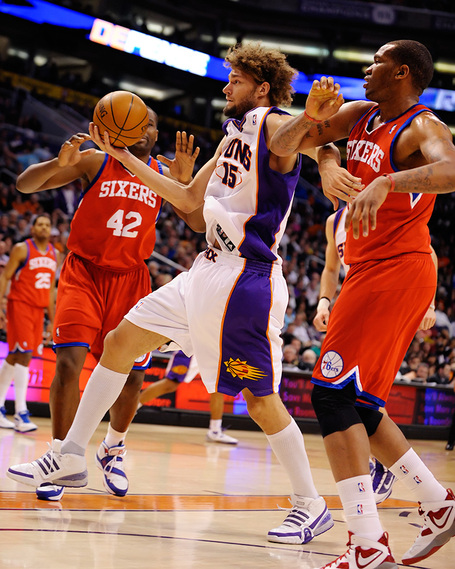