Earl Clark worked out with Coach David Thorpe at his IMG Academies pre-draft prep clinic this summer and for that reason Thorpe is someone whose insight into Clark carries more weight than most pundits.

I talked to Coach Thorpe during Vegas Summer League about Clark. Like most people, Thorpe spoke highly of Earl's potential but had some reservations about the maturity level. "The guy's a top five talent... if he locks in on a daily effort in practice, there's no way that guy's not gonna play a decent amount and have an impact on that team."

Today in his NBA Rookie Rankings: Midseason awards - ESPN (Insider) column, Thorpe has this to say about Clark whom he labeled as the "Biggest Disappointment" of the draft class:

The downside to upside is people are disappointed when you don't show progress. So it goes with Clark, who oozes with all kinds of basketball talent but has yet to earn anything of importance in Phoenix. Clark played for a tough taskmaster in Rick Pitino at Louisville, and I know from personal experience that the Suns rookie is an excellent listener and a hard worker if singled out and challenged. But in the NBA -- a man's league that does not put up with immaturity -- players must have some level of self-motivation to survive. This is part of Clark's problem. Additionally, Clark needs to take full accountability for what is happening so far (playing less than nine minutes a game) and not blame anyone else. That is the first step towards progress. Then he needs to resolve to work on his game each day. Until those things happen, he will continue to languish and frustrate the Suns and anyone else who knows what he's capable of as a player.

While it may or may not be fair to call Clark the "Biggest Disappointment", there's no question that he's yet to scratch the surface of all that talent.

Thorpe attributes the disappointment to immaturity and work ethic but based on what I've seen and heard from the coaching staff the issue might be a bit...different.

By all accounts and from what I've seen, Earl Clark is working hard. He goes full bore in practice. He stays late to work with the assistant coaches and he is normally not in the locker room after games because he's gone back to the practice court to get some more reps in.

As recently as last week before the current road trip, I talked to both Coach Gentry and Coach Igor Kokosov about Clark's progress and both said that he's coming along fine and just needs more time to adjust to the NBA game. Time that can only come from playing in game situations.

Here's what Gentry said when I asked him to respond to a recent comment from Steve Kerr that it probably wouldn't be until next season before Clark had a big impact for the Suns:

"He's just got to get a feel for the pro game. He's still a young kid. He works really hard and he's doing a good job. We've got to decide where we can play him. Is he going to be a three (small forward) or is he going to try and be a four (power forward). And there's just playing time. Everybody looks at Goran (Dragic) now but last year Goran struggled when he got to get out there some. We've got to try and find minutes for Earl to stick him out there some and I think he'll be fine."

From what I've seen Earl is making progress this season. It seemed like early in the year the plan was to break him down and make sure he was going to work hard to earn his minutes. Gentry would yank him from games immediately after just one mistake which Earl admitted was hard on him, "As a rookie, it's no mistakes. Other guys they'd be able to make mistakes and they can be able to stay out there but rookies, one mistake or two you're out of the game."

Now, Earl is getting more time on the court and being given the opportunity to play through his mistakes. The Suns made him earn that right and he's stepping up. 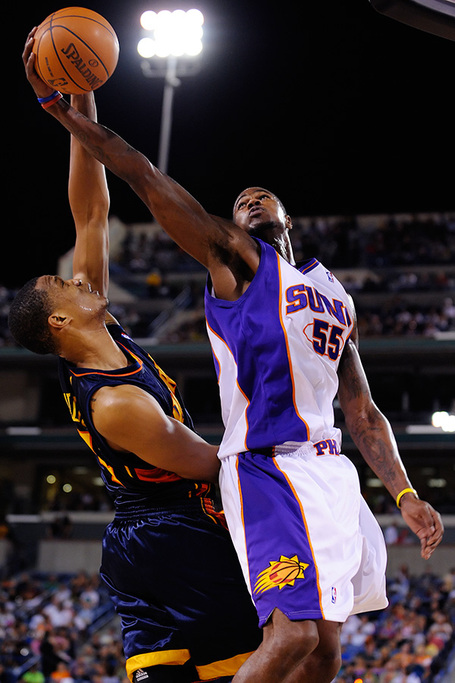 Clark's biggest problem isn't so much the self-motivation that Thorpe describe but his innate ability to react to a game that is moving at a speed he's just not used to. Add to that the challenge of having to learn both the small and power forward positions and it's no wonder he's slow coming along.

Clark is also playing behind established veterans (Amare and Grant) and a pair of bench players (Dudley and Amundson) who play as hard as anyone in the league and who are far more experienced and comfortable with the NBA game.

None of the guys Earl is playing behind has missed time this season, which is often how a rookie gets an opportunity to step up. Just look what's happening with Collison and Thornton in New Orleans, who wouldn't be playing if Paul was healthy and the team didn't trade away their veteran bench players for salary relief.

There's no question that Clark has more raw skill and talent than either Lou or Jared but the Suns simply can't afford to let Earl move ahead of either of those guys in the rotation and learn on the job the way rookies on other teams can. It's one thing for Serge Ibaka to get consistent time on a young Thunder team without a lot of depth but for a Suns team trying that was trying to make noise in the playoffs it's not so easy.

Now that the Suns expectations have fallen back to earth and Earl's put in the work off-the-court he's being rewarded with more and more playing time and he looks much better on the court. He is no longer lost on defensive rotations and out of position on the offensive end and he's even shown signed in the last few games of being more patient with his shot.

At this point last season most observers would have considered Robin Lopez and Goran Dragic to be "big disappointments" but the Suns coaching staff were patient and followed their plan. This organization has earned the right to develop Earl Clark in the same manner.

If at this point next season we aren't seeing more out of Clark then we can start calling him a disappointment but for now he seems to be right on track.